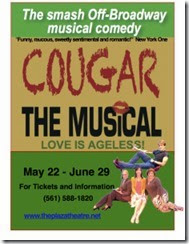 Plaza Theatre opened its production of Cougar The Musical on May 22, 2014.

This smash off-Broadway musical comedy makes its regional theater debut at The Plaza Theatre. A trio of women – single, divorced, vulnerable and searching for their identity and self esteem – are ripe to fall under the life-affirming spell of newfound love and hot younger men.

Like the Chippendale dancers, Donna Moore’s Cougar The Musical, now on stage at the Plaza Theatre, is meant to fire up a female crowd. And with just as much over-the-top cheez whiz as the Chippendales have, Cougar The Musical collides fantasy with reality and trots out every cliché about women in the throes of mid-life “what now?” as it can muster… This is really a No Man’s Zone, a pure estrogen fest, drawn in the same vein as Menopause: The Musical, though not as clever.

Dodd Loomis’s direction is smart and solid, and thankfully so — this is one of those shows with so many moving parts (not setwise, but an array of frenetic action), that it needs a good eye to keep it contained, which he does.

The actors are to be commended for giving their all, especially in some of the musical numbers that are difficult because of their over simplicity. The program credits the music to Moore and five other composers. Eric Alsford’s musical direction adds a much needed dimension to songs that hardly ever let up on the “I Am Woman Hear Me Roar” theme.

It is the abandon of all the actors that makes Cougar roar. Cartland is a hunk of burning fun as a cowboy who shows up in rodeo gear after an online meeting with Mary-Marie and as a stud with a swagger. But when he’s called upon to be Lily’s nice-guy younger boyfriend, Buck, Cartland segues easily into the more serious role. Yet, he can’t help but steal the show dressed in drag as Eve in Shiny and New..

Moreland’s no-holds-barred attitude as the lusty, busty Mary-Marie hits its peak when she takes the spotlight and performs a bold strip tease... This is one of the most affirming statements that the playwright makes and with Moreland’s help, is one of the most genuine moments in the show.

Angell Thomas can’t help but be likeable… She adds a dose of signature comic timing to the role of Lily, which gives the character more depth than what’s most likely written on the page.

The Plaza’s production is entertaining, less because of Moore’s cheeky musical script and more because of the cast and the show’s behind-the-scenes merrymakers, including costume design by Peter Lovello, scenic design by the always spectacular Michael McClain, lighting design by Preston Bircher, choreography by Elizabeth DeMarco… plus musicians, technicians and producing director Alan Jacobson.

The three heroines in Cougar, The Musical aren’t the only ones suffering from an identity crisis. So is the show…  It can’t make up its mind whether it’s a spoof of transgenerational dating from the older woman’s point of view or a pop psychology pep talk.

Directed by Dodd Loomis, with choreography by Elizabeth De Marco, the production gets as much mileage as can be expected out of such material. The cast members throw themselves into their parts with hopeful gusto.

The show, written by Donna Moore, who also collaborated with five composers on the score, has its moments, brief though they are. -

Apologies in advance if you are a fan of Menopause: The Musical, Waist Watchers: The Musical or The D Word. There is a word that sums up these shows and it is “schlock.”  …The latest of this ilk in our midst is called Cougar the Musical, a show so impoverished it couldn’t even afford a colon in its title.

Cougar the Musical is credited to Donna Moore, who wrote the script and is one of a committee of six who worked on the music and lyrics. Unlike Menopause and Waist Watchers, Cougar features original songs or at least songs that are not parodies of pop hits. A few of them are actually quite catchy…

Regardless of what you think of the show, the cast will probably earn your sympathy for what they are required to do. That is particularly so for Moreland, who performs a comic striptease down to her animal-print undies. It should be reported, I guess, that the mainly female audience howled its approval of her bump-and-grind. They also enjoyed Cartland’s wince-inducing manicurist, complete with pidgin Korean accent.

The Plaza Theatre production of Cougar: The Musical plays through June 29, 2014.