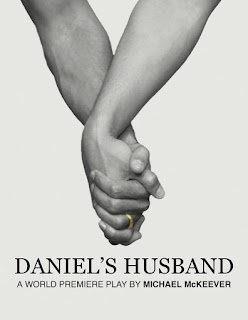 Island City Stage opened its world premiere production of Michael McKeever's Daniel's Husband at Empire Stage on May 28, 2015.  An extension of the production was announced on June 6, 2015.

The season finishes with a flourish with the world premiere of award-winning playwright Michael McKeever’s Daniel’s Husband. The play is about a contemporary gay couple who are challenged with the consequences of not getting officially married. Even in an enlightened society, when fundamental rights are denied, the results can be devastating to all involved. With humor, pathos and great insight, Daniel’s Husband explores the consequences of accepting the limitations defined by society. Ever.

The prolific McKeever, whose comedies and dramas have been produced at a number of American and international theaters, is impressively adept at blending observant comedy and potent drama, never more so than in Daniel’s Husband.

The playwright has created the shattering world of Daniel’s Husband, of course, but theater is a collaborative art form, and this world premiere wouldn’t be as intensely effective as it is without the work of director Andy Rogow, Island City’s designers and a superb cast.

Michael McClain has created a sleek abode for Daniel and Mitchell, and there lighting designer Preston Bircher softens or sharpens the drama. Peter A. Lovello’s costumes point up the characters’ taste and resources. Sound designer David Hart’s musical selections between scenes feature pointed lyrics that subtly help drive the play from lightheartedness to loss.

At the heart of the play — or perhaps the broken heart of the play — are Alvarez and Amadeo, two of the region’s finest actors... In Daniel’s Husband, the two get to explore the first blush of romance, the conflicts of a rock-solid couple, the despair over an upended future that had seemed so certain.  Together and separately, they convey the passion and strong wills of partners who think they have all the time in the world to live out their dreams. And in the final seconds, Amadeo’s stricken, expressive face reflects the cumulative power of an extraordinary play.

Bill Hirschman practically published the entire script in his review for Florida Theater On Stage, but we’ve filtered it down to:

McKeever has gifted us over the years with many enjoyable evenings from Stuff to Moscow to Suite Surrender. But Daniel’s Husband slingshots him to an even more accomplished level.

Island City’s  Producing Artistic Director Rogow is his perfect partner, precisely choreographing the steady driving pace. He helps the cast excavate the emotional depths and the fact that most are delivering some of their best work ever must derive in part from Rogow’s leadership.  The play’s tone switches among wry banter, polemic diatribes, declarations of affection and several other modes, but it still feels all of one piece under Rogow’s direction.  What McKeever, director Andy Rogow and a superb cast working at the considerable top of their game accomplish is make flesh before us the incontrovertibly wrenching emotional tableau in which love might not trump all.

Every member of the cast inhabits their character with naturalistic acting so convincing that the audience is simply eavesdropping. Especially memorable is Alvarez’s even-handed interior monologue after the stroke, describing almost amiably what has happened to him from a medical standpoint and quietly describing the nightmarish condition it has left him in.

But then there’s Amadeo… his work here illustrates that he now commands an even higher level of skill and a mastery of communicating a tumult of passion under a blithe exterior. Mitchell’s guilt as the unintended consequences of his decision come home to roost is painful to watch.

Love ya, Bill, but that wasn’t a review; it was a syllabus for a class on Daniel’s Husband.  Or maybe Chapter Seven of Michael McKeever’s biography.  In the future, please leave us something to savor as new when we go to see the play.
Rod Stafford Hagwood wrote for what’s left of The Sun-Sentinel:

There is a sense of great balance and completeness with Island City Stage's world premiere of Daniel’s Husband …the Davie-based playwright Michael McKeever has managed to create a world of wit, wisdom and woe.   Actually, "create" isn't quite right, for Daniel’s Husband is carved as much as it is written. McKeever's insight on the topic is neatly chiseled from the bedrock of Florida politics without actually dipping into that swampy mire

It isn't until the play is over, and you see how far you've come to get to the finish, that you realize how unaware you were of the deft theatric craft of the cast, crew and design team. In the meantime, you just react with everything you have.

Aided by carefully paced direction from Andy Rogow, the cast is spellbinding. The characters are intensely likable one moment and unfathomably complicated the next.

Masterpiece? Maybe. But "Daniel's Husband" is certainly a work of profoundly moving art.

I have a confession to make: I’ve always been a skeptic of the fight for marriage equality. As Massachusetts became the first to adopt gay marriage more than a decade ago, I asked myself why we would want to embrace a broken heterosexual institution… That all changed on Saturday night at the world premiere of gay playwright Michael McKeever’s haunting new play, Daniel’s Husband, by Island City Stage, the region’s LGBT-centric theater company.

McKeever’s plot was jarring and certainly had to hit home with more than a few of the predominately gay men and lesbians in the audience at Empire Stage. In an instant, he plunged his characters’ lives into unresolved turmoil and, under the expert direction of Andy Rogow, offered a powerful play that will certainly be a contender for next year’s Carbonell Award for best new work.

Both Alvarez and Amadeo offer nuanced performances while Turnbull had the hairs on the back of my neck standing on end as a self-absorbed mother whose motives were questionable at best.

Rounding out the cast were Larry Buzzeo as Mitchell’s attorney Barry, a 40-something with a penchant for vapid twinks, and Kristian Bikic as Trip, a not-so-vapid twink who winds up caring for Daniel until Lydia intervenes.

Daniel's Husband is a world premiere for Michael McKeever. He has presented a piece that is worthy of the word "world." This play will travel and bring joy for a long time because he's managed the almost incredible act of making stage love real.  Daniel's Husband is built layer on layer, with characters so deeply defined that there's not a word nor a gesture wasted.

To call the cast excellent is not doing them justice. They have absorbed and believe in the script to the point where they just are. People living the drama. Open and unafraid.

Andy Rogow has seamlessly melded the extremes of Daniel's Husband and it is Alex Alvarez as happy, crème brulee cooking, well to do architect, Daniel; Antonio Amadeo as Mitchell, his seven year partner and a successful writer; Larry Buzzeo as Barry, Mitchell's agent who prefers his partners young and temporary; Kristian Bikic as Trip, home care giver and Barry's treat of the week, and Laura Turnbull as Lydia, Daniel's widowed mother drifting through a life of Red Hats and dogs who make this a play not soon forgotten.


South Florida playwright Michael McKeever's latest work, Daniel's Husband, is a comedy; then it's a tragedy. It warms hearts and then breaks them, leaving in its wake a foundation-rattling cautionary tale about the necessity of marriage equality that might be the most momentous play he's ever written. Under Andy Rogow's sensitive, tortured direction and performed by a cast perfectly in sync with the soul-scraping demands of the emotionally topsy-turvy script, the show's Island City Stage premiere is one of 2015's handful of unassailable masterpieces.

Rogow, who also directed a celebrated reading of Daniel's Husband earlier this year in Boca, has tightened Mc­Keever's already-gripping treatise into something unspeakably moving.

Amadeo's commitment to the role exceeds even the highest expectations.... He artfully plumbs his character's righteous anger and messily wades through depths of desperation and regret. Alvarez, who is usually shoehorned into ticking-time-bomb characters, is cast at his low-key best. Turnbull embodies a narcissistic mother who is painfully familiar, possessed of a manipulator's cunning and a vulture's opportunistic eyes. Bikic and Buzzeo are the production's flawless rhythm section, keeping steady time while the leads play every note on the scale.

Daniel's Husband is a privilege to experience, and it's worth reinforcing that everything about this play and its production is local and new. I am immeasurably proud to be part of a South Florida theater community that could produce a work like this.

Mary Damiano published a review on her blog:

This is an elegant play, with no wasted space, no filler. Each scene presents new information and emotion, and in about eight short scenes over 90 minutes, the audience is taken on an emotional ride from belly laughs to heart-wrenching sobs.

Antonio Amadeo... delivers a brilliant, indelible performance as Mitchell. The emotion bubbling up inside and then pouring out of him is heart-wrenching to watch.

As Daniel, Alex Alvarez, turns in another fine performance full of passion and heartbreak. Alvarez is a big teddy bear of a man who beautifully portrays Daniel’s journey.

Turnbull imbues Lydia enough shades of grey that make her hard to hate, despite her actions.

They are ably supported by Larry Buzzeo and Kristian Bikic as friends who round out this talented cast.

Director Andy Rogow has assembled the designers that have made such excellent use of Island City Stage’s intimate space. Michael McClain’s scenic design is perfectly tasteful and upscale, Preston Bircher’s lighting is atmospheric and David Hart’s sound punctuates the drama.

Daniel’s Husband is a play everyone should see, not only because it’s fine drama at its best, but also because it has the ability to change minds about marriage and call to action those who have not taken proper steps to ensure their future wishes are respected. Don’t miss this brilliant production.


...the play, albeit making a convincing argument against marriage, makes the case for careful consideration in making the decision whether or not to marry your significant other.

Director Andy Rogow has paced the play perfectly, allowing McKeever's insights to land laser-like at the audience. The cast is first rate. Each actor has his or her memorable moment. For Amadeo it is the final breakdown of his tightly wound character, for Bikic when he says a gentle, heartfelt goodbye to his patient and for Turnbull when she reminds Mitchell that she is not the enemy.

However, the most wrenching moments come from Buzzeo as he watches his best friend fall apart and then tries to find the words, when there are no words, to comfort him. Finally, there is Alvarez's sudden rage as he explodes, "Because we can!" when Mitchell asks why he insists on making their union legal.

Costumes, set, sound and lighting by respectively Peter A. Lovello, Michael McClain, David Hart and Preston Bircher once again act as a terrific calling card for any first time audience members to Island City Stage. The play... is a deeply contemplative evening of theatre.