Actors' Playhouse is opening not just one play at the Miracle Theatre this weekend, but TWO. AND they're hosting a production by Permanent shows! That's THREE shows premiering on Miracle Mile.

Martha Mitchell Calling opens for its Florida premier at 8:30 this evening in the intimate Balcony Theater. It's sold out for the opening night, but there are still seats available over the weekend. Annette Miller stars as Martha Mitchell in this play by Jodi Rothe, and is directed by Daniela Varone. Also featured is Gordon McConnell, as Attorney General John Mitchell. 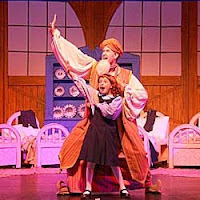 Saturday, the Playhouse's Theatre for Young Audiences program starts its run of Madeline's Christmas, a musical adaptation of the classic tale by Bemmelmans. This run includes a Christmas Eve performance. This show sold out last year, so don't miss it! It plays every Saturday in December at 2:30 pm, with a special 5pm show on December 23rd, and the Christmas Eve show at 7:00pm.

Finally, the Playhouse is hosting EL SHOW DE FERNANDO ARAU. Fernando Arau is a comedian and co-host of “Despierta América” on Univision, the country's longest-running spanish language morning program. He's playing in the Main Stage Theater at 8:30 pm. One night only, don't miss it! This spanish-language production is presented by Permanent Shows.

What a way to kick off the holiday season!
Posted by C.L.J. No comments:

Heath Kelts has made numerous appearances on South Florida stages. While he has relocated to The Big Apple with his lovely bride, stage manager Michele Wargacki, he still comes down to do shows on a regular basis.

He's currently featured as the father in this add for Meijer's, a high end grocery chain: As I post this, it's the half-hour call for the first performance in the 24 Hour Theater Project. Sadly, I am too embroiled in the two shows that I'm putting in at Actors' Playhouse, but I've been keeping track.

Christine Dolen has been looking in on the project throughout the day, and posting updates in her blog. I have a feed from her blog in the sidebar, but it only updates every few hours. The current feed is behind, and I recommend going directly to it.

She outlines the Project in LET'S PLAY. She lists the playwrights, directors, and the players.

The action really starts in RANDOM ACTS OF CREATIVITY. The playwrights draw their play's title, the director, and the cast.

Then she checks in on the progress in REHEARSE, MEMORIZE, AND OPEN. Scripts delivered around 7:30 am, and then the FUN starts. Dolen summarizes the plays, reviews the casts, and reports on the overall mood. She reports:

...so far, the 24-Hour Theatre Project is fostering an exhilarating sense of creative engagement, the likes of which South Florida's theater community hasn't seen.

Curtain's at eight: quit reading this and RUN!!!!

Hey, JOE has a theater! Let's write a SHOW! SIX of them!

They say God took six days to create the Earth.
But now, 6 playwrights will each create a new play in just one day, or actually, one 24-hour period.

It starts tonight at 7pm, when the playwrights will gather at Barry University's Pelican Theater to select a theme upon which they will base a play. Randomly selected directors and actors will be assigned to the playwright's project, and they will have 24 hours to write the script, stage & rehearse the play, and be set to perform it at 8pm on Monday, November 19, at GableStage, located in the Biltmore Hotel.
The 24-hour Theater Project is the brainchild of Naked Stage founders Antonio Amadeo, Katherine Amadeo, and John Manzelli. Joe Adler of GableStage is providing the space for the performances. Their intent is to create a collaboration between local theater companies that would not otherwise occur, and to raise funds for the participating companies. The Project will use the creative talents of The Naked Stage, GableStage, Ground Up and Rising, Mad Cat Theatre Company, and Promethean Theatre.

They will draw from the cream of South Florida acting talent, a smörgåsbord of award winning performers. (List available on the Naked Stage website.)

And in the most anticipated performance of the 2007-2008 theater season, Joe Adler, artisitic director of GableStage will appear in one of the shows. Joe doesn't appear onstage much, unless he's accepting a Carbonell or making a curtain speech.
GableStage Artistic Director Joe Adler

The Naked Stage's first annual 24-Hour Theatre Project fundraiser will take place on Monday, November 19th, 2007 @ 8:00 PM at Gablestage at the Biltmore Hotel. There will be a small reception/meet & greet with the directors, writers and actors immediately following the performance. Gablestage is located at the Biltmore Hotel at 1200 Anastasia Avenue, Coral Gables, FL 33134-6356. Single seats for the fundraiser are $50. Please call the Gablestage Box Office at (305) 445-1119 to purchase your tickets. Don't wait, as tickets will go FAST! Doors open at 7:45 PM.

Co-operative Venture: GableStage and Ground Up and Rising

Jesus Hopped the ‘A’ Train is a shocking and powerful play that addresses faith, justice, freedom-- and the oppressiveness of prison life. The piece defies all assumptions and expectations in its humane and startlingly original portrayal of a young man’s journey through the American criminal justice system. It won the Edinburgh Fringe First Award and was nominated for the Laurence Olivier Award for Best New Play.

“Has undeniable value as an open-ended play of ideas that finds genuine drama in debate. It's the kind of work less often found in New York than in London…. it has been written in flame.”
- New York Times

Email ThisBlogThis!Share to TwitterShare to FacebookShare to Pinterest
Labels: Gablestage, Ground Up and Rising

Martha WHO is calling?

The next show at the Actors' Playhouse draws either questions or exclamations, depending on whether you're a baby boomer or a Gen-Xer. It's worth learning a little bit about Martha Mitchell Calling.

...I do think Martha deserves more than a footnote in its history. She should be remembered as the woman who tried to blow the whistle on what was going on...
Front Row At The White House - My Life And Times by Helen Thomas, Scribner, 1999

According to Actors' Playhouse in their press release:

"On the eve of an election year, Actors’ Playhouse at the Miracle Theatre in Coral Gables takes its audience back to the Watergate scandal through Jodi Rothe’s fascinating, inventive and entertaining play, Martha Mitchell Calling, playing Nov. 28-Dec. 23, 2007."

But who the heck WAS Martha Mitchell, anyway?

As anyone who remembers Watergate can tell you, she is the woman who brought down the Nixon White House. She was an insider, and she was the first to call for Nixon's resignation.

“[Nixon] bleeds people. He draws every drop of blood and then drops them from a cliff. He'll blame any person he can put his foot on.”
- Martha Mitchell

I hear you. You've seen All The President's Men. Redford was hot, Hoffman was intense. They had sideburns. Hal Holbrook spilled the beans. That's what GenX remembers about Watergate. But there is a human side to the story.

"Martha's trademark is her mouth, literally and metaphorically."
TIME, November 1970

As important as two harried reporters were, and even counting "Deep Throat," the truth is that it was a woman who toppled Tricky Dick and his cohorts.

But it didn't start out that way:

Martha-isms such as "Anytime you get somebody marching in the streets, it's catering to revolution," and "Adults like to be led. They would rather respond to a form of discipline" have made her a pillar of rectitude and moral resurgence to much of conservative America, a figure of ridicule to liberals and a public embarrassment to many a traditionalist Republican.

...the Attorney General, who might be the most embarrassed of all, merely smiles a wan little smile and refers fondly to her as his "unguided missile." She also has an admirer in President Nixon, who has referred to her as "spunky" and told her to "give 'em hell."
- TIME, November 30, 1970

"I don't like Agnew, but my God, I think he's better than Nixon. I've told my husband repeatedly that I may not be here many years, but Marty will be, and his grandchildren."
- TIME, July 2, 1972

"I've given John an ultimatum. I'm going to leave him unless he gets out of the campaign. I'm sick and tired of politics. Politics is a dirty business."
Front Row At The White House - My Life And Times by Helen Thomas, Scribner, 1999

"This month the Gallup poll announced that fully 76% of the American population realizes who Martha Mitchell is, establishing her as a personality who is already better known than many politicians or entertainers—and is fast approaching the celebrity of Jacqueline Onassis (91%), who has been at it considerably longer and with some notable advantages."
- TIME, November 30, 1970

Eventually, Nixon and Mitchell tried to shut Martha up.

"They threw me down on the bed, five men, and stuck a needle in my behind. A doctor stitched my fingers after the battle with five guards." (She had bruises on her arms and thighs.)
-Mae Brussell, The Realist, August 1972

The decision was made to discredit Martha, and to portray her as delusional, a lonely housewife succumbing to an alcohol-driven fantasy. And they didn't just tell tales:

Telltale blunders, however, gave the caller away. Though the accent sounded Southern, the voice was too gravelly with whisky, and the speech too ungrammatical, for Martha. The impostor went on to confess: "I am half drunk—I do drink a little bit. Why shouldn't I drink a little bit?" Anyone who has received a call from Martha Mitchell knows that she consistently denies having downed a drop of alcohol before getting on the phone.
- TIME, July 2, 1972

From her biography on Wikipedia:

Dubbed "the Mouth of the South", Martha Mitchell began contacting reporters when her husband's role in the scandal became known. At one time, Martha insisted she was held against her will in a California hotel room and sedated to keep her from making her controversial phone calls to the news media. However, because of this, she was discredited and even abandoned by most of her family, except her son Jay. Nixon aides even leaked to the press that she had a "drinking problem". The 'Martha Mitchell effect', in which a psychiatrist mistakenly diagnoses someone's extraordinary but reasonable belief as a delusion, was later named after her. Nixon was later to tell interviewer David Frost (in September 1977 on Frost on America) "If it hadn't been for Martha Mitchell, there'd have been no Watergate." I found one travel website talking about her stay at the Hyatt-Regency in Newport Beach, Ca.

I think the TIME article sums it up best:

"A lot of this takes a great deal out of me," she said recently, and these lonely low points are likely to generate some late-hour phone calls to friends, which the public never hears about.

But the next day, Martha is ready to face them all down again with her big laugh and pretty dimples and her yellow hair piled high—"little ol' Martha," as she likes to call herself, undaunted, silly, reveling in attention, and making the staid, Republican capital a livelier place."
- TIME, November 30, 1970

Tickets available online at the Actors' Playhouse website
Posted by C.L.J. No comments:

Halloween at the Miracle Theater

With Tropical Storm Noel nipping at our shores, Executive Director Barbara Stein of Actors' Playhouse invited Coral Gables to hold the annual "Halloween on the Mile" indoors this year. Treat stations setup in the foyer. Actor Rachel Jones and her daugher, Miranda, took part in the festivities.


More pictures of this event were posted at Camera Ephemera.
Posted by C.L.J. No comments: