You may have noticed that we’ve missed posting The Scene for the last couple of weeks; we’ve been fighting a monster cold here at the Theatre Scene, and it’s been tough to get anything done.  We apologize for the gap.
But while we’ve been guzzling chicken soup and chugging tea with lemon, the scene has churned along.  We hope to catch up reviews over the next few days.

In the meantime, here's what's playing on South Florida stages this weekend:
CLICK HERE FOR THE FULL STORY »
Posted by C.L.J. No comments:

The national tour of Disney’s Newsies opened at the Adrienne Arsht Center for the Performing Arts on February 3, 2015.

They delivered the papers, until they made the headlines…Direct from Broadway comes Newsies, the smash-hit, crowd-pleasing new musical from Disney. Winner of the 2012 Tony Awards® for Best Score and Best Choreography, Newsies has audiences and critics alike calling it “A MUSICAL WORTH SINGING ABOUT!” (The New York Times). Filled with one heart-pounding number after another, it’s a high-energy explosion of song and dance you just don’t want to miss. 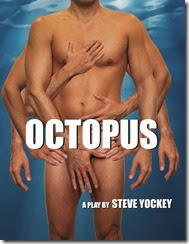 Island City Stage opened their production of Octopus at Empire Stage on January 29, 2015.

After young couple Kevin and Blake engage in an adventurous and hastily planned night of group sex with the older, more “experienced” Max and Andy, they are left trying to salvage their relationship after a pummeling mix of jealousy, betrayal, telegrams from a soaking wet delivery boy and a ravenous sea monster from the ocean floor. This universal love story rendered through a post-modern gay lens. This play involves special effects that will surprise and engage the audience.

In its ambition and form, Octopus is a whale of a play.  It’s also one with particular technical and design demands, though figuring out how to meet such challenges in a small space is one of the things Fort Lauderdale’s Island City Stage always seems to get impressively right. The company does wonders within the intimate confines of Empire Stage, its performing venue, and the work on Octopus is no exception.

Director Andy Rogow has cast the production well, with Gamero and Kauffmann bringing sharp edges to the more experienced couple, Mitchell and Moody conveying the insecurities and genuine love of the younger one. Stylistically, Bikic is the mysterious, intriguing outsider, one who becomes more controlling and threatening each time he appears.

What the Island City design team achieves with Octopus is critical to the production’s success. McClain, lighting designer Preston Bircher, sound designer David Hart, costume designer Peter A. Lovello, composer Kenneth Martinson and video designer Andy Fiacco create a world in which the “monster” grows ever stronger. Kauffmann delivers a haunting monologue from what seems to be the ocean floor, a speech enhanced by lighting, projection and sound effects. And once the fight choreography by John Manzelli gets going, eventually Mitchell, Gamero and Bikic (and, to a lesser degree, some in the front row) get soaked.

Yockey’s play Octopus gets quite an imaginative and adventurous staging at Island City Stage — but there’s really no other way to approach Octopus. Yockey dishes out theater of the absurd — some of Sartre’s existentialist leanings have no doubt seeped into the playwright’s psyche.

The ensemble is first rate, especially the pairing of Mitchell as Kevin and Moody as Blake. When Moody describes the night of sex and how the two men tasted — “Max like cigarettes, Andy like mint” — he paints a vivid picture. Mitchell’s yin to Moody’s yang creates a chemistry that is complements the juxtaposition that’s inherent in the play – the back and forth between reality and absurdity.

Gamero’s almost sinister portrayal of Max creates an essential eeriness. Kauffmann has one of the most difficult roles in the play as Andy, where he is taxed with delivering an overly long and unwieldy monologue, yet he masters it.

The 85 minutes swim by at a clip... We’ve been whipped around in the vivid imagination of Yockey’s deeper meanings of life and submerged in the world of Octopus as envisioned by Island City Stage. While it may leave some scratching their heads, there’s no doubt that what’s emerged is gripping good theater.

A little innocent fun results in intense feelings of jealousy and anger for both couples as Yockey’s play suddenly takes a complicated swim, almost drowning in metaphors.

Under the direction of Island City’s artistic director, Andy Rogow, the cast uniformly unleashes deep emotions in one of the most powerful, if not subtle, performances in the company’s short history. The audience winced throughout the Sunday evening performance as caresses turned to punches, thanks to extremely convincing fight choreography by John Manzelli.

Yockey’s play may not appeal to every theatergoer, but the lessons beneath the surface will resonate with anyone in a complicated relationship, thanks to Island City Stage’s strong production. 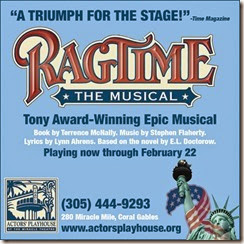 Actors’ Playhouse opened their production of the musical Ragtime at the Miracle Theater on January 28, 2015.

This sweeping musical portrait of early 20th century America tells the powerful tale of a white, upper-middle class family, an African American couple, and an Eastern European immigrant escaping to America with his daughter, as they all confront the timeless contradictions of wealth, poverty, freedom, prejudice, hope, and despair in pursuit of the American Dream. Unfolding through the fiery rhythms of Harlem and Tin Pan Alley, and the vibrant klezmer of the Lower East Side, this vivid and unforgettable Tony-winning score bursts onto the stage “on the wheels of a dream” in what will be the largest and most epic production ever staged at Actors' Playhouse at the Miracle Theatre.