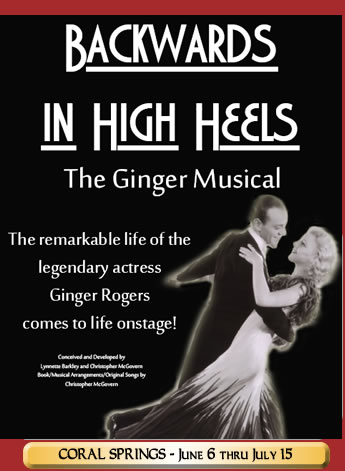 
The remarkable life of the legendary actress Ginger Rogers comes to life onstage!

And that's all they're saying about that.


Rogers’ rich life story is the subject of Backwards in High Heels, a show created in 2007 at Florida Stage by Lynnette Barkley and Christopher McGovern. The dance-driven stage biography is now at the Stage Door Theatre in Coral Springs, and though simpler in execution, the production delivers thanks largely to the distaff half of its cast.

Determined to become a star, Ginger – played at Stage Door by the radiant, abundantly talented Kelly Skidmore – started dancing on the Orpheum circuit at 15

Rogers' less-fulfilling personal life involved five failed marriages and, at least according to McGovern’s take, a love-hate relationship with her mother. At Stage Door, Kate Scott plays Lela as an omnipresent redhead who tries but fails to control her headstrong daughter. The warmth in Scott’s voice as she sings You’ll Never Know underscores the Lela’s feelings of tenderness and pain.

Nicole Davey sketches miniature portraits of several stars – Merman, Bette Davis, Marlene Dietrich, Katharine Hepburn – and emerges as the show’s solid comedienne. Ryan Lingle is a persuasive suitor-turned-scoundrel as Rogers’ first husband, Jack Culpepper, but his Jimmy Stewart bears no resemblance to the affable star. Jake Delany gets the Astaire role, but he looks, sounds and moves nothing like the legendary dancer-choreographer, and Skidmore handily out-dances him.

Backwards in High Heels may play a little loose in spots with the facts of a fascinating life. But watching the cast sing and dance to such movie musical classics as Fascinating Rhythm, A Fine Romance, I Got Rhythm, We’re in the Money and Let’s Face the Music and Dance? That’s entertainment.


Broward Stage Door Theatre in Coral Springs presents a super-energized rendition of the nostalgic musical that follows the life of the other half of the Astaire-Rogers dance duo, from the teenaged Virginia winning a Charleston dance competition that put her on the Orpheum circuit in 1926 to Ginger’s Oscar win in 1940 for a dramatic role in Kitty Foyle... It has been performed around the country since, but Stage Door embraces its tap-happy beat to put on a production that feels genuine to the core.

Kelly Skidmore as Ginger is nothing short of spectacular. She glows on stage from the moment she arrives in the opening number with the rest of the company for the rousing Gershwin ditty “Fascinating Rhythm,” which quickly propels the production into high gear.

...things continue to take off thanks to Dan Kelley’s swift direction that keeps everything moving on point so that the show never misses a beat. Add to that a live orchestra set above the action that adds even more energy. The trio is one of the hardest-working bands seen on a local stage — musical director David Nagy on piano, Martha Spangler contributing rich, deep sound on stand-up bass, and Julie Jacobs keeping time on drums.

Just as fetching is Kate Scott as Ginger’s mother, Lela Rogers, who plays the Mama Rose-esque part with a cool confidence. In Act II, her treatment of the ballad “You’ll Never Know” is so perfectly rendered it reveals true heartbreak.

The show calls on the ensemble to wear a number of different hats and there isn’t a weak link in the bunch.

For unlimited comic relief throughout, Nicole Davey has the most fun playing a veritable cast of characters... During a party scene, Davey’s quick change ups as Bette Davis, Marlene Dietrich and Katharine Hepburn are wonderfully defined and comically spot on...

Jonathan Van Dyke takes on a number of different roles, too, but he’s a stand out in the tuneful “Let’s Face the Music and Dance” that he shares with the two leading ladies.

While Barkley and McGovern’s story travels a predictable road, there’s no denying it’s a musical gem. Stage Door’s Backwards in High Heels gets five stars for being a true original.

Backwards in High Heels plays at the Broward Stage Door Theater through July 15, 2012.
Posted by C.L.J.