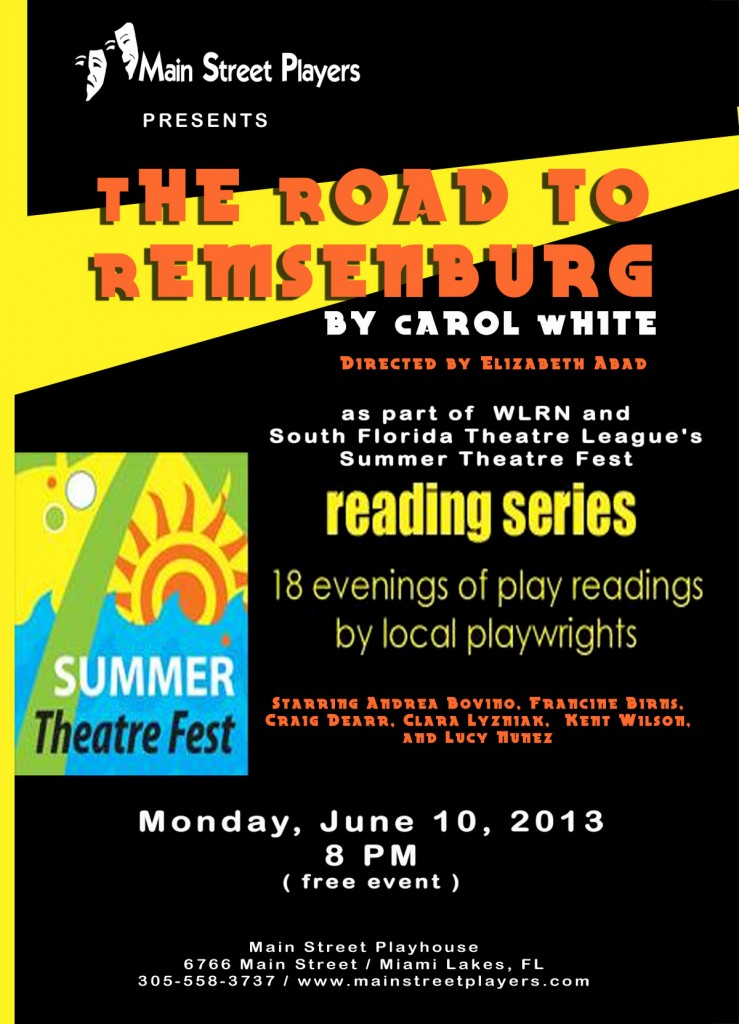 Once again, this Monday isn't actually all that dark, because it's SUMMER THEATRE FEST!  This week, Main Street Players participates in the South Florida Theatre League's new play reading series with tonight's staged reading of The Road To Remsenburg, by Carol White.

Main Street Players is a community theater company that operates a small space in Miami Lakes, aptly named The Main Street Playhouse.  That space is also serves as the primary venue for The Alliance Theatre Lab, a professional non-Equity theatre company.  Last week's reading at the Broward Center was a great success, and we hope that trend continues.

If you're looking to Get In Bed With The Arts, you'll have your opportunity this Thursday at GableStage.  And you still have a chance to enjoy a free night of theater in July.

Speaking of Play Readings...
The Miami Herald reports that GableStage will be staging a reading of Richard Janaro's Evicted tonight, a fresh take on Shakespeare's King Lear.  The same article also mentions that south Florida playwrightt Mario Diament's A Report on the Banality of Love is being stage in Paris, France.  (Yes, it's been translated into French.)  The play premiered at the defunct Promethean Theatre Company back in 2009.

And As Long As We're On The Subject...
Broadway World reports that Parade Productions is staging a reading of a new play by Michael Leeds. The Gift will be performed on July 1 at The Studio at Mizner Park Cultural Arts Center.

Looking for Space?
In case you've been thinking that theaters going dark is a south Florida phenomena, The New York Times reports that there's an unusually high number of vacancies on Broadway right now.

Opening Night: Summer Shorts
miamiartzine had a photographer at the Arsht Center for the opening of City Theater's Summer Shorts.

Being Seen
The Minnesota Playlist takes a look at how a few of the 70 theater companies in Minneapolis are using social media to their advantage.
Posted by C.L.J.