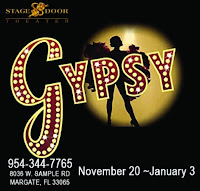 The Broward Stage Door Theatre opened its production of Gypsy on November 20, 2015.

GYPSY is the ultimate story about an aggressive stage mother. Join Rose, June and Louise in their trip across the United States during the 1920′s, when vaudeville was dying and burlesque was born. Jule Styne’s music and Stephen Sondheim’s lyrics include “Let Me Entertain You”, “Some People, You’ll Never Get Away from Me”, “If Momma Was Married”, “All I Need Is the Girl”, “Everything’s Coming Up Roses”, and “Together Wherever We Go.” GYPSY has been referred to as one of the greatest American musicals.

Any production that spotlights Ms. Olson’s golden voice (gold is a good word – warm, strong, low, vibrant, bright) in one of the greatest roles in the canon can be forgiven damn near anything. Ditto for any company that gives us Matthew Korinko’s fine turn as the mensch Herbie and a hilarious trio of over-the-hill strippers in Ellie Pattison, Stephanie Genovese and Christina Groom.

But otherwise, this production is as thin as the tinny tracks and high school quality scenery, and sits there as unenthusing as Electra’s intentionally lackluster bump-and-grind.

Director Dan Kelley adds some nice touches, such as Mama Rose being visible behind a translucent curtain when Gypsy “strips” the first time. But he cannot get the cast to inject much magic or subtext subtleties in the book scenes.

Olson may not have the freight train chutzpah of predecessors Ethel Merman, Angela Lansbury or Patti LuPone, but she combines her glorious warm belt with acting chops so that you never mistake her three-dimensional performance for some nightclub rendition of a standard.

Herbie is one of the thankless roles in musical theater, but Korinko invests him with the essential likability and makes Herbie’s loyalty credible. He’s also got a much better voice than Herbies usually do, making his duets with Olson a pleasure to listen to.

Another highlight of the show is the strippers’ trio “You Gotta Have A Gimmick,” choreographed by Chrissi Ardito and staged by — credit where credit is due — Kelley. Pattison’s zaftig Tessie Tura… is hilarious flapping her butterfy wings about “with finesse” accented by a pelvic thrust. Genovese is just as hysterical with her barely-qualifies-as-a-twitch movements that show just how bored and burned out Electra has become in the bottom rung of the entertainment world. And the limber lovely Groom almost steals the number as she toots on a horn while advising “bump it with a trumpet.”

Only a handful of local companies could afford the live orchestra needed to do this show right, but this is a score that demands it. And frankly, there are tracks and there are tracks. These sound as if created on someone’s keyboard in their garage.

…the production certainly has issues, including the fact that the actors sing to music tracks that seem to turn on and off abruptly, the set looks as if it would blow over in a strong wind, and some of the performances are no better than so-so.  But Stage Door’s Gypsy also has its assets, including a particularly magnificent one: the presence of Ann Marie Olson in the role of Mama Rose.

Olson, a Carbonell Award-winning actor, can belt with the best of ’em. But her powerful voice is also beautiful and nuanced, as is her acting. Whenever she’s onstage, which is fortunately most of the time, Stage Door’s Gypsy is the richer for it.

Director Dan Kelley and choreographer Chrissi Ardito have worked hard to weave a cast with varying abilities into a cohesive bunch, with only partial success. The kids in the show are just OK (though that’s likely the caliber of act Rose would have been pushing), as are most of their adult counterparts and some of the grownup actors who play multiple roles.

In addition to the standard-setting work by Olson and Korinko, the best performances in the show come from Erica Rose Mendez as the grownup June and Kelly Ziegler as Louise (though she’s more effective in her scenes as the reluctant “star” than she is as Gypsy Rose Lee); Brian Dirito as June’s boyfriend Tulsa; and Christina Groom, Stephanie Genovese and Ellie Pattison as the comic strippers Mazeppa, Electra and Tessie Tura.

Despite the best efforts of the artists involved, Stage Door’s Gypsy is not a memorable production of an American musical classic. But Olson’s turn as Mama Rose is most definitely worth seeking out.

There are scenes in Stage Door Theatre's production of "Gypsy" that jump right out at you. That is, of course, a good thing for the show running through Jan. 3 at the Margate theater. But those handful of buzzy and bright sequences make the rest of the musical-comedy look lackluster and low-watt by comparison.

As Rose, Ann Marie Olson is a formidable talent, gripping the role with just the right amount of fierce determination without ever mutating into a grotesque caricature of a stage mother from hell. Her voice, brassy with a warm center, is one of the best things about this production directed and staged by Dan Kelley.

The choreography, by Chrissi Ardito, works well with the rest of the cast in their scenes as Rose drags a lousy kid act from one theater to another, trying to get to Broadway. The show finally finds its connection with the audience with the comedic "You Gotta Get a Gimmick," in which a trio of blowsy strippers (Christina Groom, Ellie Pattison, Stephanie Genovese) show a pupae-stage Gypsy Rose Lee how it's done on the burlesque stage.

As Louise, Kelly Ziegler is appropriately mousy (the better to make her blossoming into Gypsy Rose Lee more spectacular), and her "Let Me Entertain You" montage showing her growing confidence onstage is slick and sexy.

The rest of this staging, especially the book scenes, comes off as underpowered as the spare sets. "Gypsy" is paltry with the bump and generous with the grind.

Ann Marie Olson gives a standout performance as Rose. Olson has passion, conviction and a set of pipes that ring out loud and clear. Olson is a regular fixture in the South Florida theatrical scene and deservedly so. She has a Broadway-quality voice and never sings a single unpleasant note. She is also a talented actress who is able to fully embody her character. Vocally she is the top and her performance is worth the price of admission alone.

Unfortunately, her performance is the only thing in this production that is worth the price of admission. There is no blame to be given to the rest of the cast who gave fine performances and tried their hardest in their roles. They just couldn't win when crippled by bad production design, bad backing tracks and an apparent lack of direction and choreography.

Stage Door does not use live musicians for their musicals but rather, relies on backing tracks. With a show that is as musically brilliant as "Gypsy" this is a crime when the tracks are good and sound great. These tracks sounded as though they were recorded inside a cave. Tinny and unpleasant to listen to, they did nothing to help support the singers and the fact that there were several fine vocal moments in the show seemed nothing short of miraculous.