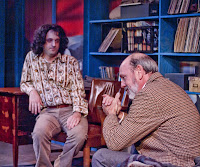 It's August 1968, and Russian tanks are rolling into Prague... Jan, the Czech student, lives for rock music; Max, the English professor, lives for Communism; and Esme, the flower child, is high. By 1990, the tanks are rolling out, the Stones are rolling in and idealism has hit the wall. Stoppard's sweeping and passionate play spans two countries, three generations and 22 turbulent years, at the end of which, love remains - and so does rock 'n' roll.

For a teen view of this show, read Alexis Scheer's review on her blog, the Playground. It's a blog, so the content will be with us for awhile. Go over there and read it.

John Thomason reviewed for something called Forum Publishing group, but the review is on the Sun-Sentinel website:

Is it enough just to appreciate the peerless acting, gasp-worthy humor and, above all, essential music buried beneath the sheen of perplexing political theory?

...keeping up with every plot movement is a fool's errand. For this one-of-a-kind labor of love, it's best to let it envelop you, taking in what you can, whether it's the poetic irony in the soundtrack's usage of the Beach Boys' "Wouldn't it Be Nice," Turnbull describing what she would do to a certain anatomical region of a young protégé, or Eleanor's fascination with the most important offstage character in the play: the legendary singer Syd Barrett.

After the cancer takes Eleanor away from us, Turnbull returns as her character's daughter in Act Two, knocking that role out of the park with equal ardor.

To go back to my earlier question: Does it matter that much of the plot of "Rock 'n' Roll" will stream through one ear and zip out the other? Not really. It is fair to criticize a play for not breaking the material down into terms its audience will understand, but when there is so much exciting stuff going on regardless, it's hard to leave the theater disappointed.

One must give credit to Mosaic’s talented Executive/Artistic Director Richard Jay Simon. For his tiny Mosaic theatre to attempt such a multi-cast, intellectually dominant play is something rarely seen in South Florida. If he diminished his seating capacity for Sean McClelland’s wall-to-wall set, it was not noticeable. If he selected a super South Florida cast to tackle this difficult-to-produce play, it was visibly apparent. If this production doesn’t get award-time attention, one would and should be surprised!

Amadeo’s Czech dialect was so on target, his ability to do “accents” could make him a South Florida male version of Meryl Streep. Ditto for David Sirois, as his Czech buddy. Amadeo, McConnell and Turnbull dominate the stage, along with this cast – Sirois, Adam Simpson, Stephanie Simon, Deborah Sherman, Scott Genn, Dana Colagiovanni, and Meredith Bartman.

Matt Corey is responsible for the sound (including the music which sets the stage for each scene), John Hall for the lighting and K. Blair Brown for the authentic costumes.

Mosaic Theatre artistic director Richard Jay Simon certainly has chutzpah for choosing Tom Stoppard’s weighty, brain-expanding drama, Rock ‘n’ Roll. But Simon has never shied away from a challenge, and Rock ‘n’ Roll might just be his most challenging production yet.

Amadeo does a terrific job of illustrating what belief and oppression does to a man—there are moments when you can see his whole life on his face.

Laura Turnbull play’s Max’s wife in the first act and his grown daughter in the second act, and does it so well that it’s hard to believe it’s the same actress. She also nails one of the juiciest lines ever when she’s telling off a colleague who’s been flirting with Max. McConnell plays Max as a gruff lion of a man who realizes he’s been roaring at the wind.

The 22 songs Stoppard chose to punctuate the plot—songs by Pink Floyd, The Rolling Stones, U2, Czech band The Plastic People of the Universe, among others—are used to great effect in Matt Corey’s sound design.

Artistic director Richard Jay Simon deserves credit for stretching himself and his actors with Rock ‘n’ Roll, but in its opening weekend, it was the ambition that was most evident rather than the mastery of the material.

Simon has certainly gathered some of the area’s best performers for the three central roles, but at this point, they still seem to be wrestling with their dialogue, spouting diatribes from the author rather than conversing. It is that ownership of the script by their characters that is missing, the potential portal to the play’s heart.

Sean McClelland takes over much of the theater with his scenic design, with the twin poles of Prague and Cambridge at opposite sides of the space, and a versatile middle ground playing area in between. Nothing has been stinted on this season opener for Mosaic, except perhaps some additional rehearsal time for the cast.

This is not a fully satisfying evening of theater, but there is so much to take in in Rock ‘n’ Roll that it can be sufficient nourishment for the mind regardless of how much of the play flies by overhead.

As challenging as Rock 'n' Roll is for the audience, doing the play justice is a test for any theater, particularly a modest-sized one like Mosaic. With a few caveats (some actors barely project, for example), Simon and company have done an excellent job of bringing Stoppard's work to life.

Matt Corey's stop-on-a-dime rock sound design is brilliant. Set designer Sean McClelland supplies both Max's Communist academic-at-home habitat and Jan's graffiti-splashed flat. K. Blair Brown's costumes and wigs are transformative, turning Turnbull from Eleanor in Act One to grown-up Esme in Act Two. Turnbull and Amadeo, two of the region's finest actors, turn in wonderfully detailed, moving performances. McConnell is still fighting for the laser precision Stoppard's dialogue demands, but his Max is there emotionally. Scott Genn, in a variety of roles, and David Sirois stand out among supporting players.Stoppard's plays are too rare in South Florida. They demand much from artists and audiences, but done well, they deliver much too. Mosaic is delivering a potent Rock 'n' Roll.

Bill Hirschman reviewed for the Sun-Sentinel:

...this is a titanium-dense Tom Stoppard play about the unlikely intersection of idealism, disillusionment, political science, classical Greek literature, pop culture, art, freedom of speech, the failure of Communism -- brilliant intellectual discussions racing past too fast to understand.

Just savor some solid performances, the witty wordplay and cerebral acrobatics. And do read the cheat sheet inside the program identifying political figures and laying out the chronology of Czech history before the show starts.

It is an Everest of a play and Mosaic's skilled team here under the direction of Richard Jay Simon has mounted a brave expedition to scale what likely cannot be completely conquered with a few weeks' rehearsal. Still, they get pretty far up the mountain.

Almost all of the cast members in this highly-skilled troupe are unable to break down the unending complexity of the material so that every moment is comprehensible. Not surprisingly, the most effective moments are the most accessible ones when the characters' intellect is eclipsed by familiar emotions of joy and frustration, such as the anger of the professor's wife (well-played by Laura Turnbull) who needs emotional support from her husband as she battles cancer.