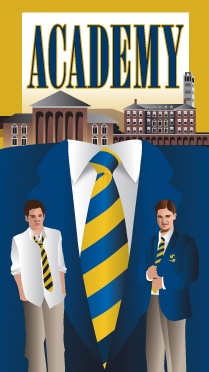 Academy is a creation of the Maltz Jupiter Theatre; artistic director Andrew Cato and longtime friend John Mercutio workshopped in Jupiter two years ago, then took it to the New York Musical Theatre Festival, and later to South Korea.  They opened the fully realized production in Jupiter on December 7, 2010.


At St. Edward's Academy, two seniors make a harmless bet on whether they can influence an unsuspecting freshman to break a few rules to succeed. But when the transaction goes recklessly out of control, the boysbecome entangled in a fight for their own academic and personal
survival.  Inspired by Goethe's Faust, Academy is a pop chamber musical about boys learning to become men - and remaining true to themselves


If this world premiere stumbled at times Thursday, director/conceiver Andrew Kato ably led a skilled team to create a moving evening from John Mercurio’s book, music and lyrics that glow with the freshness of a unique voice.

Mercurio’s score is intentionally dissonant in the opening, but settles into a bright, warm sound that reflects the hope, eagerness and anxiety of its characters. Mercurio melds a pop flavor, classical complexity and Broadway tilt toward power ballads and chorus numbers.

Kato, who is the Maltz’s artistic director, has deftly directed the show — with some asterisks. His pacing of the musical numbers, for both good and ill, hurtles along like a car careening down a hill. The show never bogs down, but you can get a bit lost when key plot points zoom past too quickly to catch. The actors, while talented, sometimes can’t maneuver hairpin changes of attitudes when Mercurio’s script and score don’t give the cast enough stage time for the moments to land with the audience.

The cast is comprised of adequate actors. All have pleasing voices although Wyse, among others, sounded like he missed dozens of notes in the early going of the performance.

Academy plays at the Maltz Jupiter Theatre through December 19, 2010.
Posted by C.L.J.