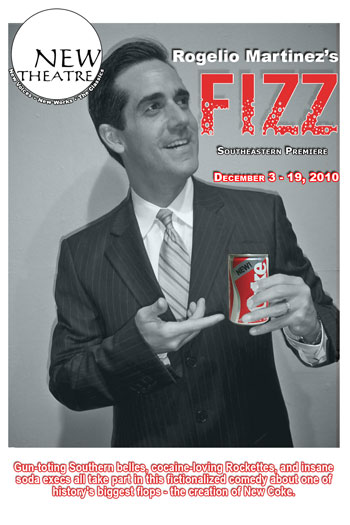 
Gun-toting Southern belles, cocaine-loving Rockettes, and insane soda execs all take part in this based-on-a-true-story comedy about one of history's biggest flops - the creation of New Coke. At the same time it examines the meteoric rise of Roberto Goizueta, as the first Cuban American to head a major American company. This play advances this season's theme of overcoming adversity and examines issues of immigration, the Cuban experience, and corporate America at its most bizarre.


It seems like a great idea.   A play about the true story of a Cuban immigrant who rose to be the head of Coca Cola.   Add that he introduced Diet Coke (hooray) and New Coke (boo hiss)... but it's a mess and that isn't solely the fault of New Theatre...

Carlos Orizondo as Roberto the Cuban chemist who fell in love with Coke as a boy and ultimately lived his dream has some good moments but these opportunities are seldom as the play veers wildly between the serious let's all hate the foreigner message and the slapstick characters who want their old Coke back.

It's an eight person cast playing thirty-seven different roles including three reporters, three Rockettes, six shoppers and four protesters.  Plus nine characters appearing on a video screen.  It's wig and mustache heaven and it's all too much.


Fizz is a jarring mélange of intriguing, even entertaining elements that simply did not mesh in Saturday’s production of Rogelio Martinez’s script under Ricky Jay Martinez’s direction.

...Fizz juxtaposes scenes of very real human conflict with bizarre flights of the surreal. There are wry and relevant observations in these over-the-top scenes, but they don’t fit in with the rest of the play. The overall effect is that is that of a mess. Some playgoers might even argue they could be excised without hurting the main story.

It’s frustrating because some of the individual elements work beautifully. For instance, Goizueta’s speeches to the audience (ostensibly immigrants at a naturalization ceremony) are simultaneously wry, insightful and ultimately moving.

The strongest single element is the performance of Carlos Orizondo under Martinez’s direction. Carefully coifed, dressed in a double-breasted suit and blessed with a gleaming smile, Orizondo makes Goizueta a handsome, earnest, charismatic man who has embraced the American Dream and is puzzled why this country has not returned his unquestioning devotion. Orizondo single-handedly grounds the play and holds it together.

His cast mates... must play numerous roles, donning intentionally false moustaches and falser voices in the Wonderland scenes. Some of the characterizations work, but most are less believable than the denizens of a Roadrunner cartoon, but that might be intentional.


What does Coca-Cola have to say about America — the immigrant experience, globalization, progress versus tradition, gods versus science? ...In Fizz, Martinez initially seeks an answer, penning a dazzling and bizarre first act before losing his nerve when confronted with some of playwriting's more banal challenges, such as resolution of plot and creation of credible antagonists (to name two that give him particular trouble). In what appears to be minor creative panic, Martinez downgrades the entire venture to a conventional comedy with a big-hearted American moral.

Carlos Orizondo, along with Bill Schwartz (who plays Goizueta's number two, a character loosely based on Donald R. Keogh), serve as charming, sturdy straight-men, flabbergasted by the American spectacle parading across the stage...

...the ensemble brings to life a whole zoo of characters, presented with a broad intensity that seems equal parts sketch-comedy and, weird as it sounds, modern dance. They're having a lot of fun with this show, and it shows. Vodihn's coked-out Rockette is un-bucking-felievable — we laugh so hard, and for so long, we almost drown out the next scene. And Andrew Wind's two-minute performance as an actor playing a deranged Southern Coke-drinker for a Pepsi commercial literally stops the show when the audience doesn't stop applauding.

Two people from Fizz stick in this writer's brain more than anyone else. The first is director Ricky J. Martinez. In a video interlude early in the play, he portrays both a redneck and druggie... He's fabulous, and I'd like him to act more. Martinez's talents as director are considerable — especially in a play like this one, which relies on whizz-bang showpieces rather than sustained mood-building...

The second is Aubrey Shavonn. I was annoyed by her performance in In Development last year, and I now assign blame entirely to that show's turgid script. Here, she glitters. She is an object of vivacious hilarity when she's a wronged, gun-toting Coke fan. She also projects a sweet, subtle pathos in her quieter moments...