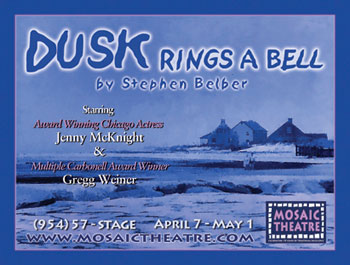 
Molly and Ray unexpectedly meet 25 years after a one-afternoon adolescent fling. She has a successful media career; he owns a small landscaping business. Both begin to romanticize their chance reunion, but a renewed connection is disrupted when their encounter reveals two vastly different paths taken and two lonely souls attempting to reclaim a moment of possibility, when they were young and perhaps at their very best.


Director Richard Jay Simon’s excavation of Belber’s script, imbued with rue and compassion, wasn’t thrilling or overwhelming, but Dusk proved quietly and persistently intriguing. Their work together was packed with so many insights into human frailty that audience members might want a second viewing just to process all that is rushing by in a whitewater rapids of ideas.

McKnight, a Chicago-based actress, charms the audience with her seemingly self-possessed urbanite barely aware of her unresolved issues. McKnight makes the most of Molly’s sly wit and self-awareness to humanize a character we might otherwise find irritating.

Weiner, who picked up his fifth Carbonell Award last week, delivers an unassailably solid performance of someone weary from a decade of consciously reining his reactions.

John Thomason wrote about the play for the Broward/Palm Beach New Times, and after reciting the entire storyline and spoiling every plot twist, eventually almost reviews the play.


The drama plays out on a rustic set that is one of Mosaic's most impressive in some time... McKnight is excellent in the more demanding of the two roles, but Weiner, while visually believable as a prickly ex-con, can't quite keep up with her. He is one of the best actors in the South Florida community — he just won a Best Actor Carbonell — but this time, a Herculean effort is required of him. He was thrown into the role with just a couple of weeks to prepare after originally cast actor Clint Hooper fell ill, and it shows.

So the play is spoiled for anyone who hasn't seen it, for what is really a vague and useless critique.  So McKnight is "excellent" and Weiner needs to make "a Herculean effort" to... well, we don't know.  Thomason never says.  He says that Weiner "can't keep up" with McKnight, so presumably there's a foot race or something. At least he follows up his comments with the fact that Weiner was a late replacement. But honestly, that should have been the first thing he mentions.  "Weiner, who was a late replacement, was not as strong in the play as his co-star."
Eileen Spiegler reviewed  wrote for The Miami Herald:


Director Richard Jay Simon draws from the actors a plaintive realization of how far Molly and Ray have come. They may be drifting souls, but they seem like people you could know, or be. Weiner, a Carbonell winner frequently involved in South Florida productions, shows the ruin of Ray’s life in his sagging shoulders and flat delivery, while McKnight captures a woman conflicted over who she is and who she’s supposed to be.

As is typical of Mosaic productions, Douglas Grinn’s set detail is wonderful, down to the sprays of sea oats growing through the boardwalk, and it efficiently shifts from beach house to Italian restaurant without drawing attention to itself.


...this production – from the beginning –  catches one’s  imagination and curiosity, thanks to the able direction of Richard Jay Simon and the acting prowess of its stars.

And that's what Ron is passing off as a review this week.  He describes the characters,  summarizes the plot, and presents a glowing biography of the actors, but never actually connects them beyond mentioning that both actors have "prowess," and that Gregg Wiener is "inimitable."

Oh, wait, there is one more thing:


The technicians really shine in this Mosaic production.


Scenic designer  Douglas Grinn has taken what appears to be a simple  beach club cottage set and transforms it into several locations. Also weaving some of the magic at Mosaic is sound guru Matt Corey (another multiple Carbonell winner), lighting genius Dan Gelbmann and low-key costume designer K. Blair Brown.

Oh, what Ron means is that THE DESIGN TEAM really shines.  If you notice the technicians, something is really, really wrong.

Hopefully, some actual theatre critics beyond Bill will see the show, because  Speigler and Levitt give us nothing.  C'mon Herald, don't send out hacks to do a reviewer's job.

Oh, wait, John LaRiviere was there for Talkin' Broadway:


Belber's writing is laden with quasi-intellectual phrases and multi-syllabic words expounding on the complex nature of communication. With so many of them packed into every sentence they begin to lose their individual clarity and power.

Both Jenny McKnight (Molly) and Gregg Weiner (Ray) handle the language well, and mange to find the relationship beneath. The moments in which they connect on the simplest of levels, and share a look and reaction are the best. McKnight at times allows the words to come out stilted, when they should be natural extensions of the character. It is a question of emphasis and inflection based on sentence structure regardless of the words chosen. Weiner has a greater connection to the words and his character seems clearer.

John tends to be overly-technical in his critiques; it's as if he's analyzing for a classroom paper, instead of a theatre review.  But as ridiculously detailed and technical as his reviews are, they are still structurally sound, unlike the products of Eileen Spiegler, who apparently has never studied theatre criticism, and Ron Levitt, whose reviews read more like press releases than critiques.