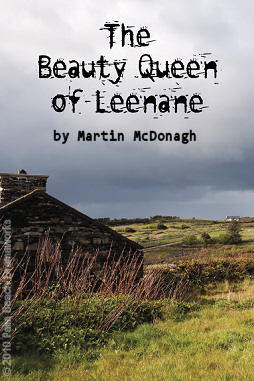 Palm Beach DramaWorks opened its production of Martin Mcdonagh's The Beauty Queen of Leenane on May 6, 2011.  It will be the final production in their intimate Banyan Street space before moving to their new home in the former Clematis Theater.


The darkly comic tale of a lonely woman and her manipulative mother, whose interference in her daughter's only chance at love sets the stage for deceptions, secrets and betrayal.


It's a delight, as always, to watch Barbara Bradshaw
electrify a stage, even in — nay, especially in — a role as odious as Mag Folan. It's a pleasure to watch her gears of manipulation turn in the play's best scene, in which Ray has come to the house to hand-deliver an important letter from Pato (who is in England) to Maureen. But Maureen is not home, and we watch as Mag tries every trick in the book — very much like the devil on the wall plaque — to persuade Ray to leave the letter with her, where she will inevitably incinerate
it in the fireplace. Refusing, an anxious Ray roams around the room, flipping the letter in his hands and tapping it nervously on any available surface. Though the action in the scene is entirely Ray's, we can't stop looking at the seated Bradshaw, whose eyes zero in, with radar precision, on the letter; she's like a salivating dog leering lustfully at the treat with which her owner nonchalantly toys.

For the most part, the rest of the players — all of them out-of-town talent
— manage to keep up with Bradshaw, something that can't be said in many
of the productions she stars in.    ...Brazda excels as the play's most tragic character, beautifully rendering Maureen's imbalanced, vulnerable psyche...


As its name implies, Palm Beach Dramaworks rarely ventures into the realm of comedy, but it has made an exception with Martin McDonagh’s darkly humorous and rather grisly The Beauty Queen of Leenane, the play that introduced the Irish writer to American audiences in 1998.

The interplay between them, particularly as performed to the hilt by fleshy, heart-on-her-sleeve Kati Brazda (Maureen) and stolid, rocking chair-bound Barbara Bradshaw (Mag), is wince-inducing yet perversely comic. They goad each other, picking away at long-festering emotional wounds with such skill that the only appropriate response is an uncomfortable laugh.

Director William Hayes’ great care with the play’s comic suspense is never more evident than in the scene between Ray and Mag, where he is impatient to deliver the missive to Maureen while her mother is eager to get her hands on it, to read and destroy it. The sequence is virtually choreographed, as Blake DeLong totes it about Michael Amico’s grimy, drab cottage set, inches out of Mag’s reach.

Although less heady than most of Dramaworks’ fare, the more visceral Beauty Queen of Leenane stands up well to the rest of the company’s season – more "theater that packs a wicked stomach punch" than the usual "theater to think about."


The new production at Palm Beach Dramaworks showcases the playwright's gift for planting secrets that detonate to wound the soul, as well as his keen ear for the back-and-forth of a toxic relationship. Director William Hayes and a killer cast (in one case, killer turns literal) deliver a potent version of the play, mixing unexpected tenderness, the possibility of hope and cruel tragedy.

Bradshaw and Brazda are equally matched combatants, aggrieved victims one minute, victimizers the next. Kelly's Pato is a simple, compassionate charmer, and the actor's delivery of a monologue offering a life to Maureen would tempt any woman to say yes.

So, too, should anyone who appreciates powerful theatrical storytelling say yes to Dramaworks' The Beauty Queen of Leenane.


Palm Beach Dramaworks’ production of Martin McDonagh’s The Beauty Queen of Leenane blends the grubby truculence of David Mamet’s plays about American lowlife with the banked horror of an Alfred Hitchcock film.  The play is propelled by brilliant performances from Barbara Bradshaw and Kati Brazda and note-perfect direction by William Hayes.

Bradshaw, a powerhouse in any role she plays, portrays Mag Folan, an old woman who schemes to blight her adult daughter Maureen’s chances of an independent life. Brazda flourishes as Maureen...

Hayes balances the script’s violence with humor and gives all the characters, if not a sympathetic spin, at least a rationale for their behavior. The play’s world is as immediate as though we’d stepped into the Folans’ kitchen.


McDonagh’s The Beauty Queen of Leenane – a melodrama which launched his career in 1996 – is given the royal treatment at Palm Beach Dramaworks here. It has not lost any of its dim, damp and dungy feel in this outstanding production, directed by William Hayes. In fact, this production proves to be one of the best two hours one can ever experience in a South Florida theatre. It is a showcase for fine acting, astute direction, technical excellence and, above all, a vehicle for fine writing. It once again proves why PB Dramaworks under Producing Artistic Director Haye’s leadership excels in providing thoughtful drama and superb performances in a splendorous manner.

It is easy to praise the two female actors – Bradshaw and Brazda. Author McDonagh has written two juicy roles and these two veterans play the nagging mom and combative daughter to perfection. But, the script also gives the two young men in this production – Blake DeLong as the fidgety neighbor and Kevin Kelly as his shy but love-seeking brother — a chance to dominate the stage.

The set by Michael Amico, with its simple furniture, rocking chair and sooty walls is home to this mother-daughter but also a “prison” for the younger woman. One can almost smell the decay of this country cottage. Credit also goes to costumer Brian O’Keefe, Scott Wagmeister for lighting and Matt Corey for his sound direction. Technically – and we sometimes forget their importance to the overall show – this production is also right on target.

The Beauty Queen of Leenane plays at Palm Beach DramaWorks through June 19, 2011.
Posted by C.L.J.