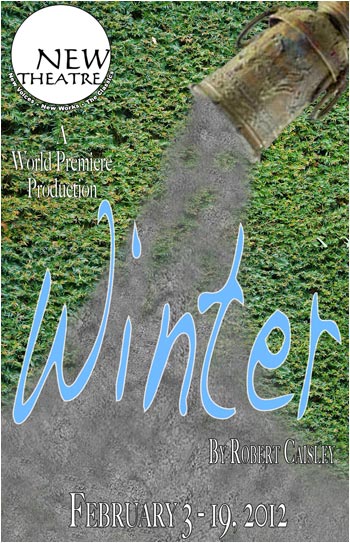 
In this witty new play, what begins as a scheduling headache arranging their mother's funeral evolves into an all-out blood feud between fraternal twins Peter and Christina Winter and their mother's mysterious, young live-in assistant.


Winter is a quality production for New Theatre, thanks mainly to Caisley's darkly humorous script and a solid cast. Wilson gives a lucid and robust performance as Peter. His comedic timing is brilliant, deftly displaying a man immersed in intellectual bluster who's further handicapped by his high-maintenance fiancée, his demanding mother-in-law, and his sister's heavy-handed personality. Rajala holds her own as a cold and calculating Christina, while Quintana gives a moving and restrained turn as Sophie. New Theatre veteran Barbara Sloan's portrayal of the spirit of Mother Winter is both vulnerable and droll. It's a bit part, but Sloan's understated performance is vital.

At roughly 90 minutes without intermission, the play at times drags (there is a sort of unspoken sexual tension between two of the characters that seems unnecessary to the plot). But overall, New Theatre has struck a positive chord.


Perhaps being buffeted about the head and shoulders by a terminal velocity flow of words slows down time.  It's the only reason I have for a ninety minute show seemingly dawdling around for another hour... along the way we're treated to Caisley's pretty smart writing, a witticism or two, a smack with a dead fish more often as not, as brother and sister revile each other endlessly and repetitiously, leading the way down a well marked path.

Annemaria Rajala is well cast as the virulent sister as is Scott Douglas Wilson as the six and a half minute younger brother.  Good actors both, saddled with mutual antagonism that never ends.

Set designer Nicole Quintana plays mother's companion, refereeing as best she can the squabbling siblings, calmly playing the hostess now that mother is dead, quietly knowing the upshot of the evening.  She uses an interestingly exotic accent, sometimes British, sometimes not, always mystifying.

Barbara Sloan, as usual, is impressive, despite having to lean off the front of the stage, peer at the audience through bird watching binoculars and warble something like: “Oh look, there's a rosy breasted, clubfooted cardinal”.


Director Ricky J. Martinez gets nice performances from his able cast: Sloan as a dreamy ghost whose life’s passions were bird-watching and one other person, Quintana (who also designed the simple, attractive set with its verdant garden background) as the inscrutable Sophie, Rajala as the relentlessly tough Christina, Wilson as the already-henpecked and puffed-up Peter.

Some of Caisley’s writing is smart and funny, some (such as the running gag about Christina always getting the hometown of Peter’s Canadian finance wrong) labored or implausible. It doesn’t help that sound is an issue, so that at times even the most attentive listener with perfect hearing will miss some of the dialogue. But given that Winter is following the inevitable downfall of such a neglectful, entitled pair, maybe that isn’t so bad after all.


Robert Caisley’s script could use some pruning and actors Scott Douglas Wilson and Annemaria Rajala could use a bit more stage time to get comfortable with the punishing cascade of dialogue. But neither flaw cripples the three from creating an ultimately harrowing evening of drama under the direction of Ricky J. Martinez as we watch the already fractured family melt down completely.

Caisley is an experienced playwright whose Kissing played at New Theatre in 2009. Like the scripts in most first full productions, his Winter needs some judicious editing before a subsequent production...  His rhythms and verbiage are impressive, but sometimes they overwhelm the talented cast members who could use few more performances to become accustomed to Caisley’s verbal corkscrews.

This shortfall is evident because Martinez allows the two leads to barrel through the dialogue as if the meaning of their lines doesn’t deserve a bit of timing and topspin on a reading.

But all the elements brought together by Martinez and company fuse together in the final minutes as the last devastating secret is revealed, leaving behind an emotional wasteland.

...this is some of Martinez’s best work, especially the physical staging...

Sloan, as always, has a lifeforce that shines like an aura. Quintana is adequate if lacking the charisma that would explain part of the plot.

The play belongs to Wilson and Rajala who both invest their slightly cartoonish characters with a sense of credibility. These are cold, cold creatures who the actors somehow make us feel a smidgen of compassion for.

New Theatre presents its production of Winter at the Roxy Performing Arts Center through February 19, 2012.
Posted by C.L.J.