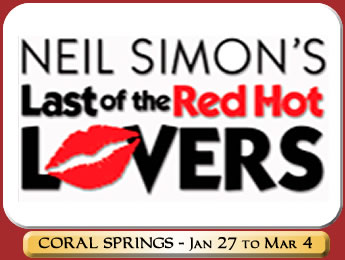 The Stage Door Theatre opened its production of Neil Simon's Last of the Red Hot Lovers on January 27, 2012, where it played through March 4..  The production moved to the Byron Carlyle Theatre in Miami Beach on March 9 for an additional three week run,


In one of Neil Simon’s funniest and most famous comedies, Barney Cashman wants to be join the sexual revolution, but can’t. He utterly and hilariously fails at seduction.


...Director Michael Leed's version of this classic, performed by this cast, proves once again the old adage that good writing, good direction and good acting will make even a sour old fart like me laugh out loud for two hours, and talk about it for two more hours after that.

So let's all bow and scrape before the graven images of Ken Clement, Shira Abergel, Elissa D. Solomon and Carol Sussman, who give Simon's script a rebirth worthy of any award in town.


Kudos to Clement for really nailing the role of an awkward, shy, inept, eager, highly vulnerable man who is more than a mere lothario.

And then there are the women – all portrayed with great skill and aplomb! This comedy is a showcase for actors. While each woman is onstage for only one scene, each gets the opportunity to flesh out her idiosyncratic role when facing off against Barney.


It's hard to imagine how the Stage Door Theatre's production of the Neil Simon comedy "Last of the Red Hot Lovers" could be any better.

Seasoned performers, confident and relaxed in their roles? Check.

A laugh riot of a script that has lost nothing in the 43 years since it debuted on Broadway? Double-check.

You could hardly be blamed if you considered the women the stars of the show, what with juicy roles that give each an entire act to chew the scenery. But then, there is the male lead, Barney Cashman, a happily married (wait, wait, he explains all that) seafood restaurateur who has decided to earn extra credit through extramarital activities. He is the planet, and they are orbiting meteors, which you just know are going to crash and burn into him. But what a heavenly show they make doing it.

There is nothing old and tired about "Last of the Red Hot Lovers," and there is plenty of zing left in its zingers. While director Michael Leeds should get the lion's share of the credit, he is working with one of Simon's speak-softy-and-carry-a-big-stick plays. Simon never intrudes, never inserts himself, never draws attention to just how clever he is.


Broward Stage Door Theatre has a knack for Neil Simon. Just when you thought there wasn’t much new to be done with yet another of Simon’s old chestnuts, the Coral Springs theater company presents a fresh production that’s entertaining from beginning to end.

The always likeable Ken Clement plays Barney Cashman... If Stage Door’s Last of the Red Hot Lovers belongs to anyone, it’s Clement, who creates the world of Barney Cashman, letting the audience in with ease and care... Clement sets the pace from the start with some flawless stagecraft business of setting up the apartment for his first guest. Another of the many highlights of his performance is his revealing monologue in Act 1, perfectly and delicately handled to add just the right touch of drama so as not to break the comic throughline for what’s to follow. Clement shines in every act, leading and following in each scene with his women almost as if it is part of a beautifully choreographed dance.

While Solomon is a worthy opponent for Clement in the verbal volleying that Simon gives the two actors, the actress could deliver her best lines with more conviction. Many times the best throwaways weren’t audible, either lost in audience laughter from a previous joke, or caught up in the actress’s battle against her character’s New Yawk accent.

Abergel... is absolutely enthralling as the kooky Bobbi. Hats off (or shall we say wigs off as Abergel has enough of them in this show) to the talented actress for embodying the delusional Bobbi rather than allowing the character to overpower her, which can easily happen in this role. Abergel and Clement have comic chemistry together and they are truly red hot here. They are the reason to see this show.

The role of Jeannette is perhaps the most difficult in the play because it is easy to get lost in a one-note mood that could turn the last act into a sour-puss downer. Clement works hard to keep the energy up, and thankfully so. Carol Sussman as Jeannette may have more success in exploring a range of emotion within the character’s words that tirelessly beat the drum of depression.

Director Michael Leeds understands the importance of the playwright’s pacing in Lovers and has obviously worked this show to make the most of comic timing; it doesn’t miss a beat.

With a cast and a production that have no fear of diving head first into the show’s comedy, chaos and affairs of the heart, Stage Door’s Last of the Red Hot Lovers immerses its audience in sizzling, dizzying fun.


Neil Simon’s The Last of the Red Hot Lovers is a vintage comedy... But as the Stage Door Theatre’s new production demonstrates, with the right actors, the play about a man in midlife-crisis mode still has plenty of satirical sting.

(The) second scene becomes the production’s comedic highlight, thanks to the odd-couple pairing of the ample, older, rich-voiced Clement and the agile, fast-talking, inventive Abergel. Leeds and the actors pack the scene with hilarious physical business and visual surprises. Seduction No. 2 also goes down in flames, but in a wildly entertaining way.