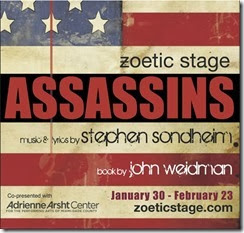 Zoetic Stage opened its production of Assassins at the Adrienne Arsht Center for the Performing Arts on January 30, 2014.

Winner of five 2004 Tony Awards including "Best Revival of a Musical," Assassins is the show that gives new meaning to the phrase "killer musical." With a stylish Stephen Sondheim score and a provocative book by John Weidman, Assassins brings to the stage a (shooting) gallery of some of history's most notorious players—the men and women who have attempted to kill American presidents.

Sondheim’s work is more intellectually and musically challenging than most, so props to the still-young Zoetic and artistic director Stuart Meltzer for choosing Assassins as the company’s first musical. Presented in the Carnival Studio Theater at the Adrienne Arsht Center for the Performing Arts, the show is a riveting, first-rate exploration of the way dreams and beliefs can turn into dangerous disillusionment.

Given that some of the real-life killers were murderous misfits or clearly deranged, you might think that Assassins would make for a grim piece of theater. Not so. Sondheim, whose work stylistically embraces the different eras in which the assassins lived, and Weidman, who captures the thematic connections among the characters in substantial scenes, embrace humor and irony as storytelling tools.

With intricately detailed staging by Meltzer and musical direction by Caryl Fantel, Assassins really does sing. To a man and woman, the cast has the vocal skills and finesse that the material requires. Richberg is a mesmerizing Booth, utterly convincing as a 19th century actor who went out in an inglorious blaze. Duckart, with his deep voice and tormented demeanor, makes Czogolsz emblematic of those who work themselves nearly to death and get exactly nowhere. Ditto Gainza’s ailing Zangara, whose soaring voice is silenced by the electric chair.

There’s a place for theater that simply wants to entertain its audiences, but a piece like Assassins aspires to much, much more. Theatergoers who take the leap with Zoetic and experience a musical that remains all too relevant will go home thinking, talking and enriched.

That Zoetic has chosen this uncommercial Stephen Sondheim /John Weidman opus for its first musical – and succeeded in scaling its genius – is cause for local celebration. Director Stuart Meltzer and a superb collection of actors and designers have scored, forgive me, a bull’s eye.

…the cast and band under Caryl Fantel’s music direction do justice to a challenging score that riffs on classic musical Americana, encompassing Sousa marches, a barbershop quartet and minstrel show cakewalks. But the traditional melodic strains are played off against anarchic atonal passages of angst and anger.  Echoes of Sondheim’s other work are clear, such as the nimble wordplay of Into The Woods and the dissonance of Passion.

In any other review, the quality of every performance would rate at least a couple of paragraphs. But with such a large assemblage, we’ll have to give some people short shrift. While these players certainly work together smoothly, ensemble isn’t quite the right term. Every one creates an independent vibrant individualized performance as evidenced by their spotlit solos.

Nicholas Richberg… exudes Booth’s mixture of self-deluded ego and patriotic altruism. A matinee idol’s charisma pours off him as he seduces Oswald from killing himself to killing Kennedy.

Chaz Mena (Sam Byck)… is simultaneously a hilarious and terrifying cartoon in a rumpled Santa Claus suit as he munches greasy junk food and dictates taped manifestos destined for Leonard Bernstein, Jonas Salk, Jack Anderson and Hank Aaron. Mena, a criminally underemployed actor… skillfully brings a variety of tones and emotional levels to what could have just been an unrelieved spewing of bile.

Nick Duckart… as Czolgosz who shot William McKinley, embodies the outrage of the blue-collar worker at the system’s inequity. Singing in the basement of his register, Duckart brings the intensity of a barely controlled explosive.

The certifiable Charles Guiteau as portrayed by Gabriel Zenone would be laughable if we didn’t know he was so dangerous. Zenone… makes Guiteau gleefully living in his own fantasy.

Chris Crawford… has a strong clear Midwestern decency that he emanates for most the show as The Balladeer, a narrator who sees the assassins for who they really are. But later, he is completely plausible as the conflicted Lee Harvey Oswald.

Just as good are Lindsey Forgey as Charles Manson’s acolyte Squeaky Fromme who tries to kill Gerald Ford; Irene Adjan as the addled but ordinary looking Moore (and Emma Goldman); Henry Gainza as Giuseppe Zangara who failed to hit Franklin Roosevelt but killed a Chicago mayor during a state visit not a mile away from the Arsht Center at Bayfront Park; Shane Tanner as the proprietor of the shooting gallery amorally arming the assassins for a buck; Clay Cartland as a woebegone John Hinckley…  and a nod to young ensemble members Kristian Bikic, Stephanie White and Aidan Neal.

…Meltzer’s staging also is dead on and he adds dozens of little fillips of his own such as a well-timed somersault whose context we won’t spoil here. While there are scene changes in blackouts, he makes the evening seem to slide by gracefully.

Any Sondheim fan understands that his work is not everyone’s cup of saltpeter. But for those who seek intelligent, thought-provoking musical theater, there are few pieces as superb as this.

Dressed in all black, a character known as the Proprietor (Shane Tanner) dispenses guns to various miscreants; we'll eventually come to recognize these disturbed souls as nine assassins, or would-be assassins, of sitting presidents. But at this time, they're simple trying out their new toys and singing about their freedom to wield them. There's something more than a little unnerving about eight people pointing pistols at the audience of a packed theater.

The reason a scene like this works so well is that director Stuart Meltzer has struck the perfect Sondheimian balance between danger and beauty, a delicate tightrope he'll spend the next two hours walking. When done right, carnage and loveliness intermingle in many Sondheim scenes, with comic irony often acting as their offspring.

Under Meltzer's direction, each assassin is bestowed with character quirks that leave a powerful impression. Richberg's Booth, with his dark suit and ostentatious red-felt vest with a gold pocket watch, projects erstwhile Southern gallantry — a pitiful B actor with a wounded leg, limping around a Virginia barn about to be set ablaze by the authorities. Richberg is such a good actor, imbuing this cretin with such tragic torment, we actually sympathize with him a little. Mena's Byck is America's irate id, a fount of delusional outrage in an absurd Santa costume who, if he were around today, would probably earn high ratings on hundreds of Clear Channel talk stations.

Zenone plays Guiteau like an unctuous dandy, hilariously waving jazz hands as he's led to his gallows. Cartland's Hinckley is a sensitive, guitar-strumming nerd with an unhealthy obsession with a certain Taxi Driver costar, a role that feels as informed by Cartland's own body of work as by the real-life Hinckley. As Fromme and Moore, Forgey and Adjan are the Keystone Kops of presidential assassins, and Meltzer draws some of the show's wittiest exchanges from these two actors. The Sondheimian balance doesn't extend to them: We never get any sense of a genuine threat when they're onstage, but they're so funny we don't miss it.

This is a production that continually goes the extra mile to surprise and impress, from Michael McKeever's intricate set design… to Ron Burns' lighting design… The amusing props, courtesy of Jodi Dellaventura, result in a couple of knockout gags I won't spoil.

Buried beneath the winning humor, clever songcraft, and excellent acting is the sobering and horrible reality that in the Balkanized political landscape of 2014, the next Booth or Guiteau or Hinckley really is just a shot away.

The Zoetic Stage production of Assassins plays at the Arsht Center through February 23, 2014.