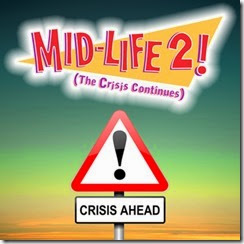 Actors’ Playhouse opened its production of Mid-Life 2: The Crisis Continues by Jim Walton & Bob Walton at The Miracle Theater on July 16, 2014.

Brand new, hot off the press, and just as hilarious as it's predecessor MID-LIFE! The Crisis Musical, that performed to critical acclaim at Actors' Playhouse in the summer of 2008.

MID-LIFE 2! (The Crisis Continues) takes us back into our middle ages with a hilariously tuneful look at the ever-growing legion of Mid-Lifers. Sketch comedy and musical comedy combine in this very funny and entertainingly witty new musical, guaranteed to serve up reflections of all our lives.

Once again, director David Arisco and company have achieved precisely what they sought: a fun, light-hearted divertissement.

But the quality of the material is not worthy of the skill, talent, polish and unflagging commitment lavished on it by Arisco, music director David Nagy and cast members Allan Baker, Maribeth Graham, Margot Moreland, Lourelene Snedeker, Wayne Steadman and Barry J. Tarallo. These folks are troupers.

It’s all whistling past the graveyard, right down to Gene Seyffer’s set design, which includes the title of each number projected above the stage, except that the letters are blurry until a giant magnifying glass slips over it.

But the material is unfailingly delivered with verve and professionalism, such as poor Moreland gamely throwing herself into a silly number about an embarrassed mother picking out condoms at a pharmacy to ensure that her teenager practices safe sex. Or there’s Tarallo and Snedeker in a weak skit about a device that helps a husband filter out ambient noise in a crowded restaurant.

The best moments are the quiet ones not reaching for laughs such as Snedeker lending her lovely voice to the joys of hearing a single word, “Nana.” Or Snedeker and Steadman recalling their courtship during a visit to the old neighborhood.

Actors’ Playhouse in Coral Gables concocted a zesty, observant summertime hit with its 2008 production of Mid-Life! The Crisis Musical.  This summer, Actors’ and artistic director David Arisco have returned to the well for a sequel, Mid-Life 2! (The Crisis Continues).

But (you saw that “but” coming, right?) Mid-Life 2! doesn’t come close to being the gem that the original was.

As with Mid-Life!, the sequel mixes songs and sketches, pairing the men and women in different combinations, offering solos and duets and group numbers. The cast’s acting ability and vocal prowess go a long way toward selling even the weaker material, but there’s only so much a musical theater talent can do.

Thanks to the multiple characters they play, the actors shine and suffer in equal measure.

Moreland has a funny second-act bit about a woman in heavy disguise buying condoms, but not for her own use; earlier, she plays a patient understandably creeped out by having skin tags and age spots removed. On the number Where’d I Put My Glasses?, Steadman is a guy desperately seeking his specs (they’re perched atop his head), Graham conducts a frantic search for her phone (she’s talking on it), and Baker is a guy who gets distracted every five seconds. Been there!

Snedeker gets the show’s most moving song, Nana, about a woman’s love for the baby girl who made her a grandmother. The guys do a new riff on the Weekend Warriors bit from the first show, this time playing men testing their “athletic” prowess on various Wii games. Poor Tarallo and Baker take Yet Another Trip to the Doctor, this time to deal with the enduring effects of a little blue pill that worked way too well.

You might suspect something is not quite right with a show when the opening remarks from the Artistic Director contain the words: World Premiere, Sequel, Development Version and Corrected Script Going Back to the Writers. And you’d be oh so right.

Six middle aged, good, veteran actors (they were in the original 2008 show) do their best to bring to life a musical revue in which the paucity of ideas is exceeded only by the obviousness of the whole affair.

But hey, it’s a musical, and these actors can really sing and David Nagy can really play the piano so what could possibly go wrong? Well, nothing really, if only the writers had written something interesting, non-derivative and with even the snatch of a melody. Choreography? Nah.

Mid-Life 2! (The Crisis Continues), directed by David Arisco and book, music and lyrics by Jim and Bob Walton, reminds us to laugh about once youthful bodies that now look like melted candles, the daily memory loss and the often ludicrous side effects of heart medications. All ages will appreciate the hilarious comedy sketches that have the spontaneity of "SNL" but with a theme that keeps getting better as the play progresses.

The actors, who are the original cast from the 2008 Mid Life Crisis: The Musical, sang their hearts out and the pianist and musical director David Nagy didn't miss a beat. Clearly, this talented cast are veterans of the stage, particularly musical theatre. Allan Baker stands out with his uproarious physical comedy in Side Effects. Regardless of age, there is something hilarious about burps that sound like violent thunderstorms and his uncontrollable animal sounds reminded me of the silly genius of Monty Python.

However, there were some awkward moments in the script, particularly in the "Nana" sketch. Following the silly "Weekend Warriors" and the Richard Simmons workout clothes, I was expecting more farcical comedy but instead was confused with the shameless amount of schmaltz depicting the joys of being a grandparent. This would have translated better and have kept the comedic momentum in tact if the song had been balanced with a joke or two.

The play comes full circle toward the end and after all of their moaning and creaking and complaining, the characters return to the joys of their inner child and the importance of always remembering to stay young at heart. Perhaps this is why Mid Life 2! hits close to home for people of all ages, because after all, nobody gets out alive.

The Actors’ Playhouse production of Mid-Life 2: The Crisis Continues plays at The Miracle Theater through August 17, 2014.