Ground Up and Rising: 9 Circles (reviews) 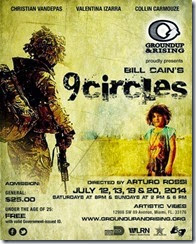 Ground Up and Rising opened its production of Bill Cain’s 9 Circles at the Miami Botanical Garden on July 5, 2014. The production moved to Artistic Vibes on July 12, 2014.

A psychological thriller based on actual events, 9 CIRCLES tells the story of an American soldier on trial for his life. The young soldier—honorably discharged but then accused of an unspeakable war crime in Iraq—Daniel Reeves is forced to navigate a Dante-esque labyrinth of commanding officers, public defenders, lawyers, preachers and military psychiatrists. By turns shocking, mesmerizing and bitingly funny, 9 CIRCLES accompanies this astonishing young soldier on a tour de force journey to a shattering conclusion in which the infinite size and tremendous power of a young man’s soul is revealed.

…this scrappy Miami company co-founded by director Arturo Rossi deserves unstinting praise for attempting this Herculean script and for enabling Christian Vandepas’ volcanic eruption as a profoundly unbalanced soldier returning from Iraq to face charges of committing a horrendous atrocity against civilians.

Vandepas fearlessly opens a carotid artery and spews lifeblood onto the stage until its splashes indiscriminately on the walls like a crime scene. The energy and commitment are breath-taking. The primary problem is that Vandepas and Rossi start at the top of the emotional range and have nowhere to go.

The second problem is that the script by Bill Cain has dimensions within dimensions, thematic layers inside layers that a production is supposed to peel away scene by scene. Instead, Ground Up’s production hammers at only one facet, albeit very well, but one: How we all are complicit in immorally feeding young people into the soul-destroying maw of the machinery of war – and then hypocritically acting morally outraged at the dehumanization we have wrought.

Rossi certainly has ripped emotion out of the entire cast, kept the long play moving at a steady clip and moved his actors around so that the very talky play never seems static. But he has not helped Vandepas build an emotional arc. He just establishes a raging river that flows by the audience instead of allowing us to get inside Reeves and grow with him.

Ground Up & Rising’s exploration of 9 Circles at the intimate Artistic Vibes space in south Miami is pointedly minimalist, keeping the focus on Cain’s words. Director and sound designer Arturo Rossi has the actors work on a nearly barren stage, with a few chairs, a cot and a bucket suggesting Reeves’ shrinking world.

Luis Daniel Ettorre and O’Neil Delapenha as nearly wordless military guards reinforce the play’s nine-scene structure, manipulating Reeves and bringing him the prison jumpsuit that replaces his uniform. But the richer acting opportunity goes to Collin Carmouze and Valentina Izarra, each playing multiple roles as the people who fleetingly attempt to guide Reeves as he moves toward oblivion.

…Vandepas …has the difficult challenge of playing man and monster. As the other characters note, Reeves is adept at feigning rage and madness, and at various points he is deluded, soulless and grasping for a way to feel as others do. Rossi lets Vandepas convey a lot of this torment, real and manufactured, with agitated shouting that becomes less effective the more it’s used.

Still, 9 Circles is a provocative, disturbing exploration of a man-made hell on earth.

As the play's title suggests, Cain borrowed his structure from Dante's Inferno and modeled his character's journey from military discharge to court sentencing on Dante's descent through the nine circles of Hell.  It's a tough theatrical pill to swallow and to perform, but luckily we have the likes of Ground Up and Rising, one of Miami's most fearless companies, willing to tackle it.

Full of potent insights about the slapdash vetting of military recruitment and war's monstrosity, 9 Circles is theater of the brain, if not the gut; in director Arturo Rossi's hands, it doesn't connect on an emotional level until the very end. Part of this is no doubt due to Cain's unique but coolly ­distancing structure — awkward forays into fourth-wall-breaking meta-theater don't work. And the play, which was revised from about 80 minutes to its current two-plus-hour incarnation, is simply too long.

But there's also a sense that Rossi is trying too hard to ratchet up the intensity. There's an awful lot of yelling in this production, understandable coming from Vandepas' mentally unstable murderer but less so from the attorneys and religious leaders who question him.

Collin Carmouze, who plays an Army lieutenant, an Army attorney, a pastor, and a civilian lawyer, doesn't sufficiently differentiate his characters.

Valentina Izarra, who likewise takes on three supporting roles, fares better at disappearing into each of them, imbuing her secretly frightened lawyer, hardened shrink, and genteel prosecutor with commendable degrees of nuance.

But it's Vandepas who keeps this occasionally blustery schooner of a play from capsizing. Emblematic of a certain kind of empathy-starved soldier, Vandepas illuminates his character's tortured, conflicted psyche, turning a potentially detestable psychopath into one who earns our pity... None of Vandepas' tear-stained breakdowns or irrepressible explosions feels rehearsed, and he quickly gets under our skin.

9 Circles may be long-winded at times, its narrative stretched unnecessarily to honor the density of its literary conceit. But its climax is such a stroke of brilliance that it overpowers the show's problems

The Ground Up and Rising  production of Bill Cain’s 9 Circles plays at Artistic Vibes through  July 20, 2014.