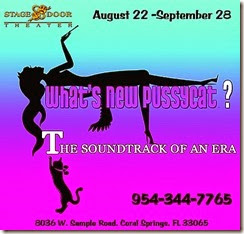 These BOOTS ARE MADE FOR WALKIN' so let's go DOWNTOWN taking THE LONG AND WINDING ROAD to A BRIDGE OVER TROUBLED WATERS.  Then I'VE GOT GEORGIA ON MY MIND, so I'll be LEAVIN' ON A JET PLANE with MY GIRL, MY GUY and ELEANOR RIGBY.  But if you're CALIFORNIA DREAMIN', I'm feelin' those GOOD VIBRATIONS so just WALK LIKE A MAN and let's HIT THE ROAD, JACK.  YOU DON'T HAVE TO SAY YOU LOVE
ME 'cause OUR DAY WILL COME and we’re gonna be HAPPY TOGETHER.
How do I know…?
I HEARD IT THROUGH THE GRAPEVINE!

The secret of the highly improbable but undeniable success of the new ‘60s musical revue What’s New Pussycat — The Soundtrack of an Era at Broward Stage Door is encapsulated in the second-to-last musical number.
The smooth solid voices of six performers are caressing the first familiar strains of “Moon River” when something happens. The canned background music stops and the singers, sitting on the edge of the stage, launch into a six-part a cappella harmony that is ineffably and ethereally lovely.
More important, the delicate intricate arrangement takes the overly-familiar classic and bends it just enough and the cast invests it with just enough genuine sentiment that the tune seems as fresh as the first time you heard it.

…there are many, many standout moments and they all benefit from the same sensibility envisioned by Michael Leeds and Kevin Black who conceived and directed this show. Perhaps because the entire cast wasn’t born when these songs were part of the fabric of Boomers’ lives, they bring an actors’ chops to interpreting these numbers as if they were new.

Stage Door has hired four of the best young voices in the region in Tanner, Cartland, Sessa and Westrich, and brought in two superb ringers, Ward and Ashley. It’s unfair to single out anyone, but Westrich just keeps getting better and better as he proves with his take on “Unchained Melody.”

The music is digital, much of it is taken from Kevin Black’s extensive library of pre-recorded music and karaoke discs, but most of them are passable professional tracks.
But under Alsford’s baton, the singers never sound less than first-rate…

Is this music for the ages actually worthy of such treatment? Boomers like me can’t judge fairly. This is the music we listened to in our middle and persisting adolescence. But there’s a bit of revenge here for our parents who watched us Boomers snicker while sitting through the songbook revues of their music for the past decade or two at Broward Stage Door. And 20 years from now, I expect we will be sitting in Stage Door listening to the nostalgic Bieber, Beyoncé and Backstreet Boys revue.

…what matters most in a revue with barely a spoken word, of course, is assembling a cast of strong, versatile singers. What’s New Pussycat? is certainly blessed that way, with South Florida favorites Shane Tanner, Clay Cartland, Mike Westrich and Leah Sessa joined by Sara Ashley and Brandy Lee Ward. Working with musical director Eric Alsford, the six ably deliver the show’s wide-ranging goods, both individually and as an ensemble.

As with most revues without an elaborate set, the actors in What’s New Pussycat? change costumes a lot, and the women… are done up like beautiful birds from the fashionably swingin’ ‘60s.
Because the show is so well sung, the revue is fun for those born after the 1960s (the entire cast, for example) and for older seniors whose teens dug that music back when it was new. But it’s Boomers who are most likely to get their groove on with What’s New Pussycat?.

The 1960s-era musical revue is enormously entertaining, visually vibrant and stylishly staged by Kevin Black and Michael Leeds. The dynamic duo conceived and directed the show first as a Bacharach homage, but then kept expanding it until they had covered the entire decade.

This cast has stagecraft bordering on witchcraft. It also has sincerity, which is just as important an element in a revue. It would all crumble under the weight of the sheer number of medleys if not for the sincere performances from Sara Ashley, Leah Sessa, Brandy Lee Ward, Clay Cartland, Shane Tanner and Mike Westrich. In this age of wailing vocal pyrotechnics, – we’re giving TV singing contests such as “The Voice” and “American Idol” some serious side-eye on that one – it is refreshing to hear singers relaxing and settling into rhythms, sitting in melodies with no straining. Instead of blasting, they caress.