Pigs Do Fly Productions: 50 Plus: A New Attitude (reviews) 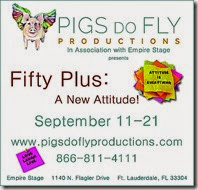 Pigs Do Fly Productions opened its production of Fifty Plus: A New Musical at Empire Stage on September 11, 2014.

This edition is directed by Marj O’Neill-Butler and Beverly Blanchette who keep the evening moving smoothly, and they lightly butter the bread with nice touches like a man getting up stiffly from sitting too long, or a man using two different types of glasses with one hanging on a chain around his neck.

They have chosen a game repertory cast of Todd Caster, Elissa Solomon, Adela Del Rio, Janet Weakley, Kerry Sensenbach and Troy Stanley, all of whom are clearly of the appropriate age. Sometimes the sextet get material worthy of their variable abilities, sometimes their skill triumphs over less challenging material, sometimes they seem like amateurs auditioning for a sit-com.

As far as the six scripts culled from hundreds submitted, we have held forth many times about how deceptively difficult it is to write a satisfyingly funny or touching or funny/touching ten-minute play. These, at least, have a plot or character arc…  In keeping with the company’s commitment to avoid condescension to the target generations, sex or love figures in almost all of the playlets but pointedly avoiding lame jokes about Viagra. A common problem with most of them is that the narrative usually lolls around too long before staking out their premise and then going forward.

Buddhists in the Basement by Mary Beth Smith, directed by Blanchette, has a trend-obsessed wife (Del Rio) returning from a Buddhist retreat weekend with two wacked-out believers in tow... This one also would be in danger of falling flat if not for the energy of Stanley and the silly posturing antics of Caster and Solomon as choreographed by Blanchette.

Rainbow Sprinkles, by Stacey Lane and directed by O’Neill-Butler, has an uptight officious executive (Weakley) interviewing potential entertainers for her ten-year-old grandson’s birthday party… The script likely would not work but for the unbridled oil-and-water contrast provided by the actors (Weakley and Stanley) and O’Neill-Butler.

Your Kiss Is On My List by Christopher Lockheardt and directed by Blanchette, is the least farcical but oddly the most intriguing. A tired bespectacled business drone (Sensenbach) is waiting at a bus stop when a slightly younger woman with a sensual, playful Sophia Vergara voice (Del Rio) asks if he wants to kiss her... It’s an offbeat little piece that toys with the difference between physical pleasures and emotional love.

The evening saves perhaps the best for last. Sharon Goldner’s Mrs. Greenblatt’s Place In The Universe, directed by O’Neill-Butler, may not be a memorable piece of writing. But the director gets satisfying comic performances from the flinty byplay between Solomon and Weakley as a daughter and mother who have the same birthdate…  There is clearly affection and frustration between the two that will resonate with audiences.

Presented under the umbrella title Fifty Plus: A New Attitude!, the production features six actors in a half dozen plays. Most of the pieces are designed to be funny, some a little suggestive, others a bit edgy. The selections are plays, not sketch comedy, but some of the playwrights didn’t get the memo. More than one script ends with a surprise revelation or twist followed by a blackout. All that’s missing is a drummer delivering a rim shot.

The evening begins with Donald Steele’s Memoir, in which a former U.S. senator… is struggling to start his memoirs... Caster and Solomon are good actors, but they struggle as they try to sell Steele’s implausible conversation.

Mary Beth Smith’s Buddhists in the Basement spoofs older folks who bounce from one new “passion” to the next. Sadie (Adela Del Rio) returns from a week-long Buddhist retreat, much to the delight of her husband Joe (Troy Stanley), a big guy who’s fond of dropping f-bombs. He ups the pace when Sadie reveals that she’s come home with William (Caster) and Elizabeth (Solomon), a homeless Buddhist couple she intends to install in their basement. After more dickering, a twist comes, but this one is minor and predictable.

Rainbow Sprinkles by Stacey Lane seems simple enough, as a Type A businesswoman is trying to hire a clown to perform at her grandson’s 10th birthday party. But the playwright sends the piece into absurdist territory by making Miranda (Weakley) a control freak nut job whose notion of political correctness is ridiculous. As is the play. Poor Stanley, outfitted in full clown regalia as Rainbow Sprinkles, seems to deflate before our very eyes.

Christopher Lockheardt’s Your Kiss Is on My List is another oddity, a play about a woman (Del Rio) who seductively grants a stranger (Sensenbach) at a bus stop permission to kiss her. Turns out that’s her thing, kissing strangers and then ranking each kiss on a list. The guy is flummoxed but eventually complies, leaving him flustered and blustering

Mrs. Greenblatt’s Place in the Universe by Sharon Goldner features a senior citizen mom (Weakley) and her driven daughter Marcia (Solomon) meeting for lunch on their mutual birthday. The tightly wound Marcia can’t wait to get back to work, and she likes nothing, particularly the choice of restaurant and her mom’s new penchant for blurting out the word “vagina” at top volume. The piece devolves into a mother-daughter button-pushing session, with (you guessed it) yet another twist.

Directors Marj O-Neill-Butler and Beverly Blanchette keep the actors’ energy level high and each piece lively in its delivery. But given the plays’ less-than-artful writing and sketchy style, this time the pig fails to take off.

Tidbits and tasty morsels describe the mélange, with some of the shorts having more success than others. Yet, overall, A New Attitude is a worthy night of theater as a send off to summer and an ushering in of fall. The overall attitude carries a cohesive "last hurrah" vibe — carefree with not a lot of fuss and muss.

First up, Memoir, directed by O’Neill-Butler concerns a former D.C. senator (Caster) who has decided, in his retirement, to pen a memoir about his Inside the Beltway life… The short is thoughtful and the direction skilled as the two characters dart in and out of the truth and its consequences….
Any sketch that features Weakley is always drop-dead hilarious whether or not the script adds up. In Remote Control, she once again proves her comic timing as a cackling housewife who beckons her husband (Sensenbach) when technology gets the best of her.

Buddhists in the Basement is one of the weaker plays and it’s fall down is a combination of the script, its direction, and the players…. The premise is cute enough, but it plays more like a Saturday Night Live skit than a short play. Additionally, the ensemble, directed by Blanchette, seems a bit disconnected to one another in a script that calls for a team effort.

Your Kiss is on My List is a cute distraction…

The final offering is Mrs Greenblatt’s Place in the Universe, a commentary on mother-daughter relationships. Weakley as Mrs. Greenblatt shares the same birthday as her 50-year-old daughter, Marcia…  Solomon shows her acting skill here, really bringing the audience in to Marcia’s "been here, done this before" world, as Weakley plays up the narcissism that sometimes seeps in to senior moments after the children have left the nest. If there ever was a way to portray a character’s "it’s all about me now" in 10 short minutes, Weakley nails it.

Pigs Do Fly Productions has proven its muster with its short plays. Here’s hoping that they are in the process of searching for a long form play that suits their mission for their next outing.

The Pigs Do Fly Productions production of Fifty Plus: A New Musical plays at Empire Stage through September 21, 2014
Posted by C.L.J.