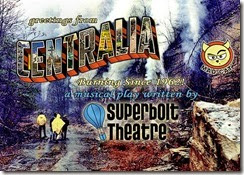 Mad Cat Theatre Company opened its production of Centralia at the Miami Theater Center on August 14, 2014.

In the 1960’s an underground coal fire was sparked by an accident.  20 years later the fire was still burning and the inhabitants of Centralia were forced to relocate. 3 people refused to leave.  Inspired by this true story, Centralia sees the 3 remaining inhabitants travel the globe to tell the world their story.  Using a mixture of comedy, cabaret, dance and music, this brave new play explores the relationships that can only be formed through this unique disaster.

…when Mad Cat finds the right groove with the right piece as it has here, even hidebound traditionalists need to recalibrate their definitions and expectations of “theater.”

The script’s challenge and Mad Cat’s achievement is to find the precise tone that acknowledges the naiveté of these yokels and yet never cruelly taunts them for it – in fact, finding something admirable about their persistence. It harbors compassion for myopic people trying to ignore that their way of life has eroded away.

That success results from the performances that Tei has elicited from his note-perfect performers, Troy Davidson, Theo Reyna and Bonnie Sherman, who are highly skilled at seeming amateurish. The crucial key is how the trio exude an unabashed earnestness that is just too pure to ridicule no matter how ridiculous their ideas.

Davidson… immerses himself in Alistair who doggedly keeps the general store open. He keeps a perfectly reasonable tone during a mirthful monologue describing the Byzantine series of barter trades that passes for economic transactions in the town – starting with an apple, passing through old cars and ending up with a basketball trading card.

Reyna… exudes a sad sack dorkiness and a mild discomfort living in his own fleshy body, even as Norman throws himself into the risible dance routines with a total commitment.

Sherman, a New World School grad returned from several years in New York, is especially notable creating Jennyfer, a lovely young woman with her hair all in ringlets whose face glows with delight as she finds a way to incorporate her untapped talents into the show…

The considerable amount of music is provided live by Steph Taylor on a variety of guitars, drums and keyboards..

Mad Cat’s creative team once again makes a virtue out of a modest budget since the Centralians also would have little money for production values. Karelle Levy has garbed the cast in exactly the kind of well-worn motley that the characters would toss together from their closets. Matt Corey provided the ominous soundscape and Melissa Santiago Keenen delivered a surprisingly varied array of lighting configurations. Tei designed the intentionally cheesy recreation of the stricken town complete with a vent pipe belching smoke and also provided the off-beat props (along with the help of his parents Anne and Pio.)

Theatrically, South Florida is a place where tried-and-true shows rule, from time-tested American classics to recent buzzed-about plays from New York. The region’s playwrights, happily, have upped our appetite for original fare. But work that’s more experimental or unusual in form is much harder to find.

Unless you go to a Mad Cat show.

Centralia, the new Mad Cat show at Miami Theater Center’s SandBox, wasn’t created by the company, but its style and spirit make it an ideal Mad Cat show.

The cast — Troy Davidson as Alistair, Theo Reyna as Norman, Bonnie Sherman as Jennyfer and versatile musician-composer Steph Taylor — isn’t supposed to come off as a polished theatrical troupe. These are supposed to be stubborn, down-to-earth Pennsylvanians telling their stories with an amateur’s charm and passion. Under Tei’s direction, Mad Cat’s quartet of fine pros finds subtle ways to convey that let’s-put-on-a-show spirit while skillfully bringing to life each of Centralia’s disparate segments.

To say Mad Cat Theatre’s founder Paul Tei has eclectic tastes is like saying there’s water in the Atlantic. It’s too bloody obvious. But it’s just as well, for Mad Cat’s production of Centralia written by the Scottish/Norwegian/Swiss/Ecuadorian and British Superbolt Theatre features everything theatrical but the kitchen s... no, wait, there’s maybe one of those, too.

Centralia is a clever piece, fast, funny, imaginative... Troy Davidson as Alistair is always at ease, endearing as the town’s last store keeper, and handyman Norman (Theo Rayna) playing the rankest of amateur actors, commits every possible stage sin, including bouncing off the furniture. Bonnie Sherman, returning to Miami after a seven year absence in NYC, plays the multi-charactered Jennyfer, tenderly serious one moment, wonderfully funny the next, flinging herself around the stage like a demented doll in leotard and tights.

The doggedness of a population determined to hold onto their land, no matter what, is illustrated beautifully---and hilariously---in Centralia, the current production from Mad Cat Theatre… an inventive loopy, wildly funny hour of entertainment that includes storytelling, interpretive dance and tales acted out with action figures.

But all that wackiness is grounded with real heart, and Davidson, Reyna and Sherman do a terrific job of infusing each moment of Centralia with the emotion of three people who are brought together through shared disaster and their devotion to their hometown.

…director Paul Tei has found an apt theatre piece for his artistic vision. Tei’s “Centralia” is an immersive experience that begins even before the cast takes the stage. His wink-to-the-audience set is like a theme park ride, setting the scene for a story so bizarre it has to be true.