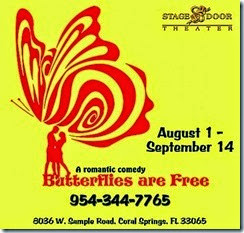 The Broward Stage Door Theater opened its production of Butterflies are Free on August 1, 2014.

All Don Baker wants is a place of his own away from his over-protective mother. Don's been blind since birth, but that doesn't stop him from setting up in a New York apartment and making the acquaintance of his off-the-wall, liberated, actress neighbor Jill. Don learns the kind of things from Jill that his mother would never have taught him! And Jill learns from Don what growing up and being free is really all about.

…while Stage Door’s edition under director Michael Leeds is a pleasant enough afternoon’s diversion of humor and emotion, it’s never terribly compelling and the whole thing could use more pizzazz to make it feel satisfying.

The problem is it requires some extraordinary actors to energize the low-key proceedings, especially in the conflict-free first act. These folks are adequate but they don’t have that alchemical topspin that God gifts some people with and this show relies upon.

Gordon is suitably amiable, but Don is written to be laid-back and controlled. So that leaves Jill to be the engine for the first act. Jamieson is likable enough, but not distinctive enough. This was the role on stage that made people notice then wild child Blythe Danner and in the 1972 film version, Jill was kookiness incarnate, Goldie Hawn. Without that magic to enchant, Leeds moves the first act steadily but without much electricity.

Mrs. Baker is an equally tough problem. Packard is good at playing the uptight matron with the frozen face of polite geniality…the role was tailored to… archetypal acerbic judgmental motherhood. But underneath the off-putting behavior, you sensed her genuine concern for her son…. clearly a solid actress,(Packard) gets all of that in pieces, but not at the same time. Something doesn’t quite gel. She’s not intimidating enough to be a real threat to Don’s independence even though we’re supposed to feel the threat under her inspired brittle barbs.

One plus is that Leeds never lets the play remain static visually. People are usually in motion and Don even swings around the framework of his bed, which is about eight feet off the ground on stilts.

Andy Quiroga plays the small part of a pretentious off-off-Broadway director who has auditioned Jill for a part and who arrives at the loft to take her home with him. Quiroga is note perfect, setting up Packard’s verbal spikes like a professional volley ball player. We have said it repeatedly: Quiroga has to pay the family bills as a college educator but he’s one of a half-dozen grossly underutilized actors in the region.

…as Stage Door Theatre’s new production of Butterflies Are Free so engagingly demonstrates, vintage theater isn’t the same thing as dated theater. Butterflies isn’t Death of a Salesman or The Glass Menagerie, but it is truthful and resonant, and its combination of interpersonal drama and edgy humor makes for an absorbing, entertaining couple of hours.

Stage Door’s production works so well for a couple of reasons. The company hired director Michael Leeds and set designer Michael McClain, both Carbonell Award winners for the The Timekeepers at Island City Stage last season, to work their magic. A freelancer and onetime Tony Award nominee who has directed at Stage Door many times, Leeds works with his well-cast actors to shape richly colored performances, working the beats of a scene like a masterful conductor.

Gordon charms the audience from the opening moments of the play, before Don ever utters a word, and his charismatic appeal just keeps deepening... The actor impressively conveys Don’s romantic vulnerability and the fears he works so hard to hide.

Packard’s Mrs. Baker is, at first, a fierce and condescending mama bear. Her comments to Jill are delivered with a tight smile and inflections that border on the lethal. Yet Packard, too, lets us see the fears and love beneath the in-control façade.

Jill is often played as an airhead, and though Jamieson makes us laugh with the character’s penchant for misquoting, she captures the damaged and fearful young woman behind the bravado. As director Ralph Austin, Jill’s on-again-off-again boyfriend, the always-fine Andy Quiroga is all cringe-inducing, possessive swagger.

Thanks to the astute, skillful Leeds, Stage Door’s Butterflies Are Free floats like a butterfly and stings like a bee. And it also, most significantly, touches the heart.

The comedy Butterflies are Free... is not a musical. But music is key to the flow of the action and the meaning of the characters’ lives, particularly Don Baker (Britt Michael Gordon), the central figure in this quirky, slightly dated, but certainly entertaining and worthwhile production.

As soon as you see the set for Butterflies are Free, you just know it must be the 1960s.  Never mind the peace sign painted on the wall, the loft apartment by set designer Michael McClain stretches all the way across the stage and has a skylight. You’d have to go back about 45 years to find that kind of affordable floor space on the Lower East Side of Manhattan.

Half the time the actors hold the stage and carry the sauterne play effortlessly for two hours, including a 15-minute intermission. The other half feels somewhat under-powered. That may be due to the languorous feel that director Michael Leeds imbues in the production. This is an illusion since there is plenty going on here, a veritable 3D of emotions, particularly in the kick-ass last act.