It's the quietest extension I've ever seen: I only caught it because of Christine Dolen's story in the Herald about the special Halloween ticket price of $17.76.

How can you have a Halloween special performance rate for a show that closes before Halloween?

According to the Actors' Playhouse website, the play closes Sunday. But a phone call confirms that indeed, the hit production of 1776 is held over until November 2nd.

And just in case you've missed the hullabaloo - and the collection of great reviews this show has garnered - I present them again, for your convenience: 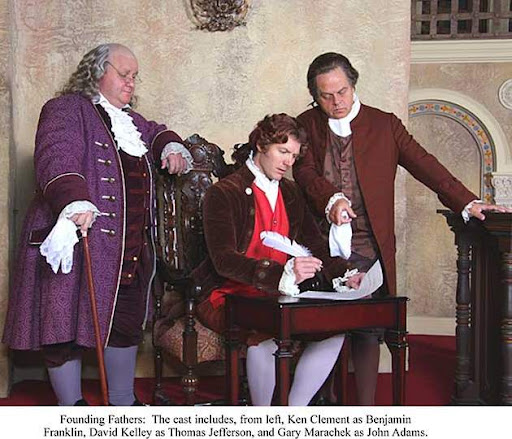 The top of the heap and the one to beat is the Actors' Playhouse production of 1776. Director David Arisco and his team assemble a huge number of men to bring us the Birth of our Nation, set to music.

Christine Dolen of the Herald was the first to press, and finds that it's a good choice:

The musical 1776, a lavish yet revealingly human look at the men who signed the Declaration of Independence, suggests that contentious politicians eventually can get along -- though the path toward unanimity may be strewn with sacrificed ideas.

And not only is it a good choice, Christine thinks it's a good production:

...Arisco, his artistic team and a powerhouse cast deliver a 1776 that fulfills its creators' intentions.

The Sun-Sentinel is apparently still covering theatre after all, with Bill Hirschman reviewing. Like Christine, he also praises 1776, although he felt it was a little long. But mostly, he praises the show:

Producers Barbara and Larry Stein, who took a huge gamble investing in a 26-member cast and the most sumptuous costumes from the rental house, match master director David Arisco's commitment.

And like Christine, Bill thinks that this a well-timed and timely production:

The marvel is how a 1969 show written about an 18th century political convention resonates so deafeningly in 2008. Line after line echo our concerns about war, the true nature of patriotism and the difficulty of legislators balancing honor and compromise. John Hancock looks at the newly-minted Declaration and says, "How it will all end, God only knows." Once again, timeless theater captures the zeitgeist of today.

Rounding out our 1776 coverage is Brandon K. Thorp for the Miami New Times. And true to form, Brandon brings a fresh point of view.

When I saw the new Actors' Playhouse production of 1776, a row of youngsters was seated immediately behind me. Before showtime, they were discussing the election...

...They kept up the discussion, in whispers, well into the play. At first I was annoyed; then I was charmed. 1776 has everything to do with the moment. These days, we are all speaking the language of Samuel Adams and Benjamin Franklin, because we, like they, are living in historic times.

Indeed, no one has missed the timeliness of this production; and all have commented on the quality of that production:

Right now, on the Miracle Theater's stage, one month before what Joe Biden recently referred to as "the most important election of our lifetime," an enormous and enormously talented cast is dusting off America's most precious founding myth and imbuing it with a humanity, sense of humor, and sense of urgency that has gone missing from every reenactment I've ever seen.

Ken Clement plays the serenely dour Ben Franklin like, well, Ben Franklin: perennially the smartest guy in the room and too wise to take his blessings too seriously.

Gary Marachek, as John Adams, is supposed to be the star here, and he is remarkable...

...Colleen Amaya, ... though her appearances onstage are few and brief, they herald some of the play's most affecting moments.

Brandon closes up his review with the most fitting summary for this production, one that echoes David Arisco's reasons for choosing this musical in the first place:

...a perfectly enjoyable night at the theater, but it's more than that. In other reenactments of American myths — Johnny Tremain, The Last of the Mohicans, Pride & Prejudice — the talk of the characters often sounds weirdly anachronistic. But now, with our leaders preoccupied by grave issues of foreign policy and American self-definition, it's very much of the moment. The chatter doesn't sound distant. We — even the kids in the row behind me — are speaking their language again.