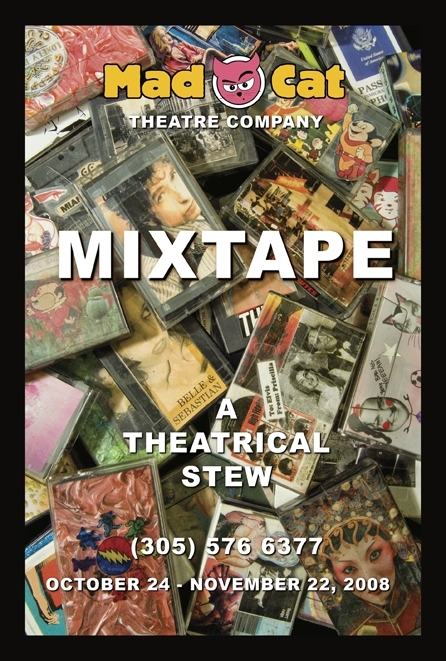 MIXTAPE, a theatrical stew, is a collection of 11 pieces that have been compiled together much like the mixtape your sweetheart made you back in the 90's. Featuring 8 plays, a film, a photo play and a selection of poems by Jeff Tweedy of Wilco (The Greatest Band in America!), MIXTAPE explores the power of music and it's constant ability to be the soundtrack of our lives. Whether it's war, travel, the one that got away, Sondheim, or your obsessionwith Meat Loaf that's on your brain, in the words of Queen, MIXTAPE is guaranteed to blow your mind!

Marco Ramirez' 3:59 A.M. and The DJ Lights A Cigarette

Paul Tei's Outside It's America, Untitled Repression or How
To Fight Cancer, She and Sho-na-bish

and collected poems by Jeff Tweedy of Wilco

General Admission is $25; Students are $10 with valid I.D

Cash or Check only.

For all other reservations or for more information contact Mad Cat Theatre Company at 305.576.6377 or visit them online at www.madcattheatre.org or www.myspace.com/madcatcompany
Posted by C.L.J.