We have a little cool snap to put us in the mood for the upcoming Holidays.

Christine Dolen of the Miami Herald reviewed Gutenberg! The Musical at Actors' Playhouse at the Miracle Theater. Director Dave Arisco has been trying to get this one the schedule for a couple of years, trying to tap into the success he had with The Big Bang a few summers back. And with the economy tanking, you're going to see more small musicals in the future. And Christine caught on to it very quickly:

The theater is again presenting a wannabe wacky two-man musical, supposedly created by the two guys performing it for us, a roomful of potential backers. The notion for this one isn't as grandiose as trying to squeeze the planet's history into the running time of a Broadway musical. No, this is just a frolicsome made-up biographical musical about Johannes Gutenberg, inventor of the printing press.

Thankfully, it's not a costume comedy piece set in medieval Germany. Or maybe not so thankfully... 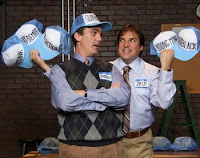 In Gutenberg! The Musical!, Bud and Doug literally wear many hats. So that we can keep track of the numerous characters -- which include an evil monk, a couple of drunks, an anti-Semitic flower-selling child and Gutenberg's amorous, illiterate assistant Helvetica (she's named for the font, or is it the other way around?) -- the actors don different baseball caps, each with a character ''name'' (does ''Drunk #1'' count as a name?) written on it. Yes, they differentiate the characters by using a variety of British accents (though the story is set in Germany), but it's helpful to be reminded of just who is supposed to be speaking or singing at a given moment. It's the baseball cap equivalent of a cheat sheet.

But this is a musical, and we can't judge a musical solely on some gimmicks introduced in lieu of multiple actors or dozens of quick-changes. We need to consider the music.

Though some of the music hits the level of decent generic Broadway parody, Gutenberg! itself isn't the least bit witty. The guys sometimes explain the genre of the songs we're hearing -- the ''charm'' song, the ''I want'' song -- as well as defining metaphor and foreshadowing. Yawn.

It's obvious to me that Christine found that everyone was working to overcome bad material:

The actors, bless their hard-working souls, do everything humanly possible to sell both Bud and Doug's show and Gutenberg! The Musical!. LeGette and Padura are both experienced, capable musical comedy performers (I know this from seeing them in other shows), but the dead-on-arrival ''entertainment'' they're trying to deliver here makes both break out in an anxious sweat.

Mary Damiano review Gutenberg for The Sun-Post, and pretty much had the same exprience as Christine Dolen:

The joke is funny for about five minutes of the show, most notably when Bud and Doug stage an entire cast chorus line by hanging the hats on a clothesline. If only every moment, or at least half of them, could have been as inspired as that one.

And although, like Christine, Mary noted the similarities to The Big Bang, she concludes:

Gutenberg doesn’t need to suffer from comparison to The Big Bang — it does a good job of suffering all on its own.


Gutenberg! The Musicalruns through January 4 at Actors' Playhouse at the Miracle Theater.


Brandon K. Thorp had a bunch of "stage capsules" in this week's Miami New Times. He's already reviewed Seafarer, and while it appears he has not seen the current production of The Complete Works of William Shakespear (Abridged), he does seem to have seen M-Ensemble 's production of Joe Turner's Come and Gone.

This production is yet more proof that August Wilson is damned near indestructible. If he wasn't, the blunt direction and hammy, uneven acting of this play would cause a mass exodus at each intermission, yet people stick around for Wilson's crazy poetics — and maybe, maybe, for actress Lela Elam.

The only thing that makes this Joe Turner palatable at all is the performance of Ms. Elam. Relegated to what's almost a walk-on role and utterly incidental to the plot, Elam's the kind of artist who owns any stage she touches.

The M-Ensemble production of Joe Turner's Come and Gone plays through December 21 in Miami.

Florida Stage opens Mezzulah, 1946 this week. During WWII, with the men called into military service, women donned work clothes and took to the assembly lines. Now that the war is over, not all the women are ready to head back to the kitchen...

You can read alot more about Mezzulah, 1946 on the Florida Stage FurtherMore page, including conceptual art of the production design, photos from the rehearsal, and an interview with the playwright.

Although not technically an opening because it's been touring the schools, this is the first chance the general public has had a chance to see it.

"It" is the exciting production of Macbeth, produced by GableStage and directed by Mad Cat Theatre's Artistic Director Paul Tei. Since it played in schools and had a tight budget, Tei's adaptation runs about an hour long, and has a cast of THREE; Erik Fabregat, Margie Eisenberg, and Deborah Sherman. Sherman, when she's not touring schools, is the Artistic Director of the Promethean Theatre.

I use the word "excting" because so many other people are talking about it: Mary Damiano, Christine Dolen, and Beau Higgins all have a blurb up about it.

There's a lot of talent behind this production, people, and the best part is that you can see it for FREE. It's being paid for by The Children's Trust, and performances will be followed by a discussion with the cast.

Additional Free Performances are on Friday December 19, at 8pm and Saturday, December 20, at 7pm at Sanctuary at ArtSouth, 250 North Krome Avenue, Homestead.

Broward Stage Door Theatre opens La Cage Aux Folles on Friday. It's La Cage, what else can I say?

The venerable M-Ensemble's production of Joe Turner's Come and Gone plays through December 21 in Miami.

Either I missed it, or subconciously skipped it, but Edge Theater is inflicting running its awful production of Ambition in Wilton Manors through December 21. This is one of the few plays where every single critic was in complete agreement. No website: go to the Theatre League website if you really want to go see if it's as bad as they say.

She Loves Me winds it up at the Caldwell Theatre in Boca Raton on Sunday.

Alice's Adventures in Wonderland at The Playground Theatre.

A Christmas Carol, The Musical, plays on Saturdays at Actors' Playhouse at the Miracle Theatre. Through December 27.

The Miami Children's Theatre presents its version of Disney's Beauty and the Beast.
Posted by C.L.J.