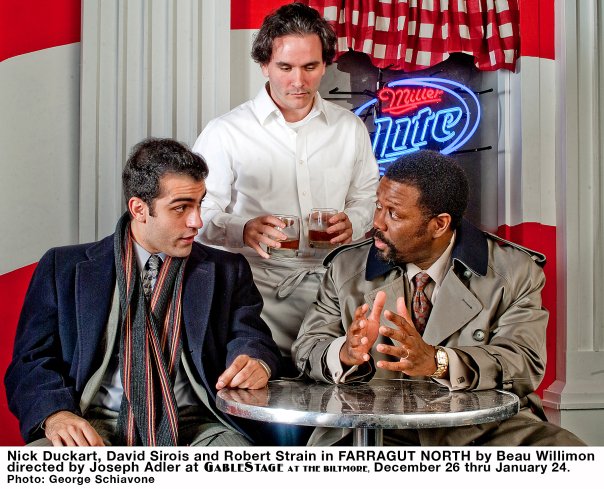 GableStage opened its production of Farragut North by Beau Willimon on December 26, 2009.

During a tight presidential primary race, a wunderkind press secretary's meteoric rise falls prey to the backroom politics of more seasoned Washington operatives. This Off-Broadway smash is an inside look into the world of politics ~ an intriguing tale about loyalty, obsessive lust for power and the costs one will endure to achieve it.

In 1993, fresh off the Clinton victory and inspired by the likes of young politicos George Stephanopoulos and Dee Dee Myers, I, too, made the trek across the country to Washington, D.C. And, like so many others, I found myself opening mail and answering phones before landing a position as press secretary to a Congresswoman from Tennessee. This firsthand experience in the ways of Washington drew me to Beau Willimon’s Farragut North, the political drama that recently opened at Joseph Adler’s GableStage.

Duckart delivers a solid performance—he must ultimately carry the slow-moving play—but never quite achieves the narcissistic bravado that I have seen in these politicos. Duckart finally makes the role his own, though, as doubts begin to creep into (his character)’s mind...

Gregg Weiner shines as Paul Zara, the loyal veteran of decades of campaigns... Betsy Graver also stands out as Molly, a sexually-empowered 19-year-old intern, who is completely underestimated by her male supervisors.

Director Adler makes no bones about his support for Democratic politics and that passion shows in virtually every aspect of his strong production. The GableStage production, coming in an off-year in the political cycle, doesn’t seem very timely, but it would have been a bigger shame if Adler had waited until 2012.

...the GableStage production is never less than entertaining, largely because of the crafty cast. Duckart, who emerged last year in the Caldwell’s Whipping Man and Mosaic’s Why Torture Is Wrong, gives his best performance yet as Bellamy, oozing charisma and easy-to-identify-with fallibility. The always enjoyable Weiner devours the role of sage, hot-tempered Paul and Sherman brings a valuable ease to the small, but pivotal role of the reporter.

Adler has a good eye for fledgling talent and he has another discovery in Graver, who becomes more dimensional as the character of intern Molly evolves in complexity. And keep an eye on Hemphill, who makes a lot of a character that spends most of his time listening

Farragut North is not a great play, but you would never know that from the terrific production it is receiving in Coral Gables.

Brandon K. Thorp reviewed for the Miami New Times; This isn't one of Brandon's better efforts; we really never get a sense of where the script ends and the production begins. This is the sole paragraph that deals with the production before us:

Joseph Adler directs his cast with feeling and anger. In most scenes, they spit their lines at each other with a ferocity that would seem out of place if they were having the same conversations under saner conditions. Deborah Sherman's Ida Horowicz is a shark with legs, and Nick Duckart's Stephen is the ugliest and most damaged creation to jangle across this stage all year.

Virtually the entire thing is a blow-by-blow of the script, with nary a mention of what the actors, director, and creative team brought to it. For example, this segment:

But then comes a moment of apparent honesty. Discussing the candidate, Paul seems genuinely moved. Weiner's Paul — speaking in a deep, rich drawl as edibly smoky as Grandma's gumbo — outlines how Morris's campaign will spread a message of change and hope from sea to shining sea.

Does this spring solely from the script, or is it something that Adler and Weiner discovered? Is Brandon telling us the prior scenes fail to ring true, and if so, is that failure due to the script, or to Adler's interpretation through his actors? We can't tell from this review.

If this was a film, it wouldn't matter so much, because everyone in the world would be seeing the same performance. But live theatre doesn't offer that. Tomorrow night's show will be different, and the next production will give the world something even farther removed. It's not enough to describe the story, or to examine the script. The critic's job is to examine the production, and in this, Brandon fails.

The cast is universally solid with special mention for Weiner's experienced Southern fried campaign manager who extols the primacy of loyalty over talent but is perfectly capable of a junkyard brawl and betrayal.

But the show belongs to Duckart who, thanks to Joseph Adler's guidance, drives the play with a frenetic pace and whip-cracking patter even before circumstances ratchet up the stakes.

Adler's direction is as solid as always... He gets his actors to exude performances that somehow draw you in like eavesdroppers who can't walk away.

It seems as if GableStage’s brilliant director Joseph Adler has collected a bunch of the bright young South Florida acting talent on one stage, melded them with three terrific veteran performers, found a stimulating play about politics and turned the mixture into one of the area’s best 2009 productions.

Duckhart is on stage almost constantly and his portrayal may well be a break out performance for the young actor. He is so real, so charismatic, that he is totally believable as the young staffer hoping to take himself into the West Wing. Duckhart only recently wowed audiences at Boca’s Caldwell in “The Whipping Man” and in “Torture” at Mosaic – and with this performance in “Farragut” firmly establishes his credentials.

And, wait until you meet Graver, who dominates the scene as the sexually assertive intern who takes on supposedly clever politicos. She is stunning!

Farragut North plays at GableStage through January 24, 2010.
Posted by C.L.J.