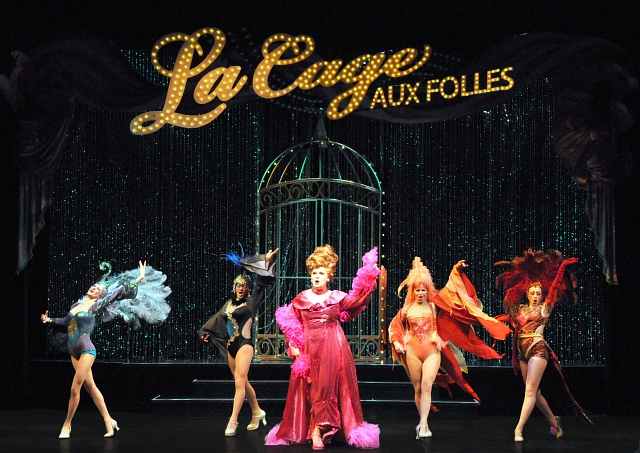 Bonne Soiree! Welcome to glittering world of La Cage aux Folles, winner of the Tony Award® and one of the all time biggest Broadway hits! Featuring beautiful "show-girls," a delightful score by Jerry Herman and colorful production numbers, this musical features the memorable songs, The Best of Times and I Am What I Am, and explores what it is to be a family, to love without condition, and above all, to be proud of who we are. Adult subject matter.

Mark Jacoby is wonderfully warm as Georges... John Scherer is quite grand as Zaza, and undeniably gives a powerful performance of "I Am What I Am" in one of the best moments of the show...

However you feel about La Cage’s politics, the show is enormously audience-friendly. But it calls for so much show business glitz and pizzazz that it requires a theater with the resources of a Maltz Jupiter to carry it all off.

Succeed it does, though, thanks to director Mark Martino, choreographer Denis (cq) Jones and their designers, the team that levitated The Boy Friend here a few seasons ago. And thanks to John Scherer and Mark Jacoby, Broadway veterans who reinvigorate the central roles of aging gays Albin and Georges, the longtime partners facing the dilemma of a thankless child.

Interspersed with the story are the onstage club antics of The Cagelles, the gymnastic chorus of is-he-or-isn’t-she performers who strip down to their scanties and still keep their sexual identities a relative mystery. Between Jones’s dance steps, Jose M. Rivera’s sparkle plenty costumes and Gerard Kelly’s oversized wigs, you could be well entertained without paying any attention to the show’s plot.

...delivers exactly what we could all use about now, a big, splashy slice of escapism. And if you take away a message about family values, that would be fine too.