Plaza Theatre: I Am Music (reviews) 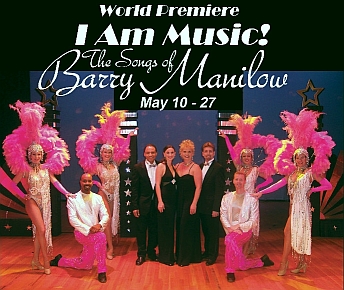 Plaza Theatre opened the world premiere of I Am Music; The Songs of Barry Manilow on May 10, 2012.  Apparently, the Plaza Theatre doesn't believe in telling us anything more than the title of the show on its web site, so we have no blurb.  But we can tell you that it's a revue of Barry Manilow songs.


All of Manilow’s greatest hits are here; you can make up the set list yourself.  If you really are a fan of Manilow, you’ll miss his particular honey-smooth smooth tone and flawless phrasing. If you just want to hear lovely songs and didn’t make out to his voice on the radio in the backseat, you likely won’t mind.

That raw material was irresistible to creator/ director Kevin Black, who honed his creative teeth, in fact, developing shows for cruise lines. I didn’t know that fact until I Googled him after the show. But I would have bet you all a steak dinner at Ruth’s Chris that was the case even before I turned on the computer.

With one exception, the singers are all competent if not inspiring. Ditto for the dancers’ energetic if not always synchronized execution of choreography by Black, John Hensley, Isabel Trelles and Ben Bagby.

The asterisk here is the aforementioned Bagby. He’s in a different show and that’s a compliment. Doing quintuple duty as co-choreographer, musical arranger, musical director, singer and dancer, Bagby has the precision, polish and verve of a veteran Broadway song-and-dance man that the others are aiming for.

Still, credit the others with some moderately heartfelt moments: Craig Strang on “Trying to Get the Feeling Again,” Marisa Guida on “The Old Songs,” and Miami native Mimi Jiminez on “Somewhere Down the Road.” All four deserve a bow for pulling off the tongue-twisting challenge of the brilliant words and four-part arrangement of “American Bandstand.”

The mysterious David A. Frye wrote "special to" the Palm Beach Daily News:


The new jukebox musical, conceived and directed by Fort Lauderdale producer Kevin Black, features many of the familiar hits by the Boy Wonder from Brooklyn, performed by a competent, professional cast of four singers and four dancers who more than satisfied the opening-night audience.

Throughout the evening, each of those performers was given several chances to shine, but the use of pre-recorded backing tracks instead of a pit trio — understandably an unfortunate economic necessity — zapped a lot of the energy out of the show...

One after another, the hits just kept on coming, most notably a Top 40 twin-spin of Jump Shout Boogie followed immediately by the Manilow makeover of the theme from American Bandstand (complete with a full-blown jitterbug passage with dancers Teddy Talbot and Fallon D’Eliseo) that had toes tapping.

Other highlights included a sweet duet by Marisa Guida and Mimi Jimenez on I Made it Through The Rain, a beautiful dance sequence that introduced Ben Bagby (who also served as the show’s arranger and musical director) on Could It Be Magic and an explosive take by the entire company on the classic Copacabana.

In spite of a decent effort from a likeable, talented cast and some obviously catchy tunes, this new revue is lot like many people’s feelings about Manilow’s music: a bit cheesy, a bit Pollyanna, but built upon a positive, uplifting vibe and certainly entertaining.

I Am Music; The Songs of Barry Manilow plays at the Plaza Theatre through May 27, 2012.
Posted by C.L.J.