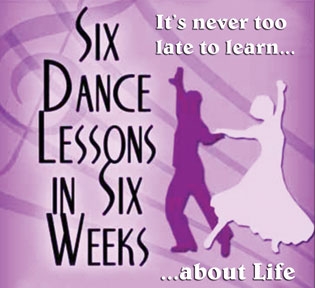 Miami Beach Stage Door Theatre opened its production of Six Dance Lessons in Six Weeks at the Byron Carlyle Theater on May 4, 2012.


It's hate at first sight when Lily, a formidable retired woman, hires Michael, an acerbic ex-Broadway chorus boy, to give her private dance lessons in her Florida condo.  As Michael teached Lily to dance, they both learn some unexpected lessons in life.


Six Dance Lessons in Six Weeks is a gentle message comedy about lonely people reaching out somewhat obliquely for human contact. But this occasionally charming pas de deux at Stage Door’s Miami Beach venue is thrown out of step because one partner is far more vibrant than the other.

...it requires both actors invest the script with an extra level of energy and charisma for this to really have any electricity arcing on the stage. In this case, only Buzzeo delivers that. True, he has the showier role and he makes the most of it without going over the top. But Spear needs to dig a lot deeper into her inner curmudgeon and give Buzzeo a flintier, more vital force to work with. In fact, Buzzeo starts off strong, but eventually he needs an equal partner to feed his performance.

Director Dan Kelley brings out what he can in the script (he’d have made a perfect Michael a few years ago), but the only scene that really shines is in the confessional scene when the two characters admit their deepest tragedies.

Initially, it seems like a directorial mistake that the client clearly knows how to do every one of these dances, exactly how Fred and Ginger somehow knew each other’s moves telepathically the first time they met in every movie. But while it’s not handled well by the playwright, that actually is part of his point: She doesn’t need lessons in dancing; she wants human contact.

While this isn’t as strong as its last show Last of the Red Hot Lovers, hopefully Six Dance Lessons will start bringing in a steady audience for Stage Door’s new venue. For a region whose calendar was once dominated by light comedies, the number of professional troupes doing them now has dwindled.


It was produced at the Coconut Grove Playhouse in 2003, with ex- Golden Girls star Rue McClanahan as Lily and former Star Wars hero Mark Hamill as Michael. But as the new Dan Kelley-directed production at the Miami Beach Stage Door Theatre demonstrates, Six Dance Lessons doesn’t need stars to connect with an audience.

An attractive Phyllis Spear is Stage Door’s Lily, a cautious gal who enjoys getting dressed up in glamorous dance outfits. Spear doesn’t quite overcome her natural accent to sound Southern, but she plays Lily’s judgmental nature and slowly thawing feelings towards her dance instructor decently.

Larry Buzzeo plays a flamboyant stereotype as Michael, dropping attitude and striking poses all over the place. He also has a tendency to indicate, acting out his dialogue as though the folks in the theater need the extra help... But Buzzeo is a good enough actor that, once Michael’s relationship with Lily deepens, their caring connection feels completely believable.