Of course, the big news this past week as been Tropical Storm Isaac, which blew in on Sunday, disrupting activities across South Florida.  Fortunately it didn't impact most Saturday performances - unless they were scheduled to be outdoors.  But it does mean that this Monday will be especially "dark" as Isaac works its way out into the Gulf of Mexico.

The rest of the good news is that we're coming through the summer doldrums, and the theatre scene will begin to pick up, starting with events opening this coming Labor Day weekend.  Even with our Twitter feed choked with photos of downed palm fronds, we found plenty of good readin'.

Just a reminder, we're still looking for photos of your "dark" theatre to use for the head of this column.  We do a new reading list every week, folks; help us out with a photo or two (you can post them on our FaceBook page).

Filling the Hole
The Miami Herald reports that GableStage has completed its season line-up with the addition of Cock, the Olivier Award-winning play by Mike Barret.  And it's given The Scene the opportunity to use the headline the Herald didn't have the guts to use; you can look forward to months of double entendre references.  Also, The Donkey Show will wind up its extended run at the Arsht Center this weekend with Harry "K.C" Casey hosting the show.

Speaking of The Arsht Center
The Miami Herald reports that repairs to the Arsht Center's 6-years-old roof will cost $3.8 million, well under their $5 million deductible.  The City of Miamivhas already authorized that amount for the repairs.  By the way, the Arsht Center's Carnival Studio Theate made The Huffington Post's Most Memorable Theatres list.  We don't know why; it's a nice space, but it's not THAT nice.  What ev.

The Examiner calls the Miami Beach Stage Door Theatre Company at the Byron Carlyle Theater "a gem."  (We ask that the usual anonymous Stage Door nay-sayer please post comments over at The Examiner; it's their story, not ours).

Weekend Updates
Florida Theater On Stage lets us know that while Ground Up and Rising had to cancel its performance of Macbeth this past Sunday, they still have shows this coming weekend, and that New Theatre will be launching its BoomFrog series this Saturday, and Alliance Theatre Lab is holding its first 10-Minute Play Festival next month.  Oh, and Outré Theater Company found a home. 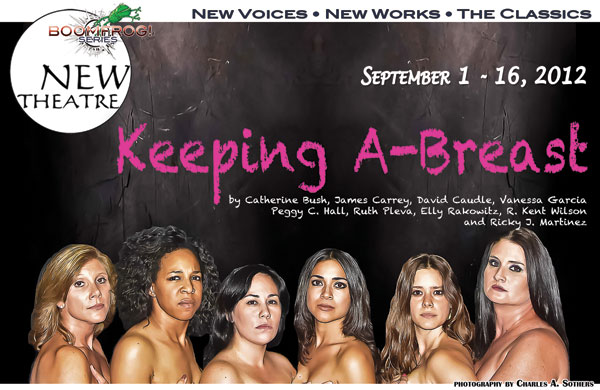 
Seems you can’t swing a dead cat or any other metaphorical animal these days without knocking into a ten-minute play. How the devil did this happen? Isn’t a play supposed to be at least long enough to fill up the space between dinner and bedtime?

Stragglers
The Drama Queen reports that The M Ensemble and The Theatre at Arts Garage have finally set their season line-ups. The good news; the plays are worth the wait.

Taking the Express
Florida Theater On Stage breaks the news that Nancy Barnett, former managing director of the defunct Florida Stage, has taken the job of Executive Director at Actors' Express in Atlanta, Georgia.  She'll remained tied to South Florida theatre for awhile longer, however; her son will finish out his senior year of high school in West Palm Beach, so he and Barnett's husband, actor Gordon McConnell, will hold down the fort.