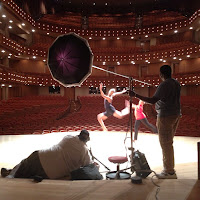 Today's "dark" theater is the Adrienne Arsht Center for the Performing Arts.  Despite all the lights for their photo shoot, a theater without an audience is technically "dark."

The Arsht Center is the newest of the major south Florida Performing Arts Center in this class; The Kravis Center was first, followed a year later by the Broward Center.  The South Miami-Dade Cultural Arts Center is much new, but it's not the same scale.

Tuesday Isn't Dark
Florida Theater On Stage reminds us that Tuesday is the 11th Annual Cappies Awards the Broward Center for the Performing Arts.

Cool New Service
Need a Playbill for your school's spring musical?  Or a community theater staging another classic comedy?  Playbill has a new program to create.. programs.

Rising Up
Florida Theater On Stage reports that Ground Up and Rising as re-arisen.

The first production is Ground Up’s presentation of Hoch’s Jails, Hospitals & Hip-Hop slated for Mondays and Tuesdays, May 21,22, 27 and 28 at the O Cinema Wynwood...

Sounds a Little Like 'Lost'
The Drama Queen gives us some background on the new play at New Theater.

...Road Through Heaven is part of what Martinez calls In God's Land: An Island Trilogy.  It is set on "a forgotten island" in the Caribbean, focusing on three people whose lives become entwined:  Jesus (Javier Cabrera), a 21-year-old who was orphaned at the age of 12;  Dolores (Evelyn Perez), a tough woman in her late 30s; and Victor (Martinez), a hard worker devoted to his woman and, increasingly, to the younger man.

Road Through Heaven opened over the weekend, and plays through June 2. 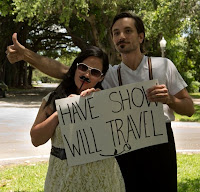 Florida Theater On Stage tells us about another theater company that's reappeared; White Rose Miami ("Have Play, Will Travel") is taking a production of The Pillowman around town.  And we mean just that:

Some of the venues in the third week still haven’t been nailed down, but negotiations are underway with storefronts on South Beach and galleries in Wynwood.

In Hell With A Cell Phone
Playbill reports that a theater critic grabbed a theater patron's cell phone during a performance and hurled it across the room, resulting in his expulsion from the theater.  CNN published reviewer Kevin Williamson's explanation of why he took the woman's cell phone.  And frankly, the ushers tossed out the wrong party.  We should all pay heed to Mr. Williamson's experience.

On the Boards with Alan Jacobson
Florida Theater On Stage links to a podcast of an interview of Alan Jacobson in partnership with Arts Radio Network.