Mondays are (not so) Dark 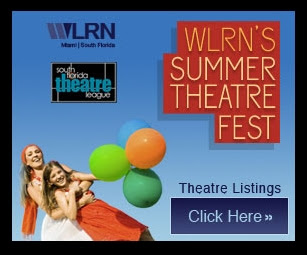 It might almost count as an additional day to New Theatre's Miami 1-Act festival, which officially closed yesterday.

As you must know by now if you read The Scene, The South Florida Theatre League has built an entry for The Great Coconut Grove Bed Race, and this week you will find it at Actors' Playhouse for the final preview of Rated "P" for Parenthood on Thursday.

And by the way, you're not just looking at the thing; you have a chance to climb aboard, to literally Get In Bed With The Arts.

We expect there will be photos taken.

Anywho, here's your Monday reading list.  Bring it with you to the Playhouse, read it in The Bed.

Speaking of Actors' Playhouse and "P" for Parenthood
Broadway World fills us in on Rated P for Parenthood opening Friday at The Miracle Theater.

Not So Impossible
The Shiny Sheet interviews William Michals, who will be performing Don Quixote in the upcoming Palm Beach Dramaworks concert presentation of Man of La Mancha this week.

Jupiter Rising
BroadwayWorld reports that a Maltz Jupiter Theatre student has been selected to cover several of the girls' roles in the Broadway revival of Annie.


Jupiter resident Skye Alyssa Friedman, 11, has been cast as a standby in the Broadway revival of the beloved show. Skye, who is a sixth grade home-schooled student, will travel to New York City in July to begin rehearsals and spend the next six months performing in the show. She will cover four roles in the show.

She's in good company; in 1996, a young Ryan Hopkins was cast to play Louis Leonowens in the Broadway revival of the King and I.  He had performed in a few Jupiter Theatre musicals during the Richard Akins years; Mame, The Secret Garden, and The Music Man.

Donna Murphy, who performed at the Burt Reynolds Jupiter Theater in 1989 in the lost musical Dangerous Music, played the leading role of Anna Leonowens, opposite Lou Diamond Phillips as the King.

That's What We've Been Saying
The Examiner reports that South Florida can count excellent plays and musicals along with sunlit beaches and gin-clear ocean.  Which reminds us, we need to clean up our Theatres list.

We Thought it was TWENTY Questions
miamiartzine asked Clay Cartland 28 questions about himself.
Posted by C.L.J.