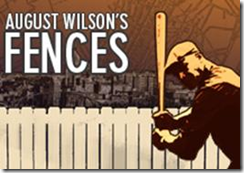 In the powerful, stunning dramatic work that won August Wilson his first Pulitzer Prize, Troy Maxson has gone through life in a country where to be proud and black was to face pressures that could crush a man, body and soul. But the 1950's are yielding to the new spirit of liberation in the 1960's. It's a spirit that is making him a stranger, angry and afraid, in a world he knew and to a wife and son he understands less and less.

If the production is missing the volcanic performances and therefore the tragic downfall oft compared to King Lear, AAPACT’s cast is remarkably adept at delivering both Wilson’s relaxed syntax of genial chatting, as well as the tougher challenge of making his flights of heightened near-poetic language sound like natural verbiage.

Every production hangs on the performance of the actor portraying Troy and the choices that the actor makes with the director. Larry Robinson creates a different Troy than we’ve seen before. Physically a good fit, Robinson is tall and lanky with muscled arms. The persona his Troy exudes is of an amiable grinning fella you’d see on the street rather than an iconic figure with dreams and flaws too large for his life. While that irises down the size of the play and the depth of his fall, it also makes Troy more recognizable and relatable to the audience.

Carolyn Johnson is one of the region’s finest actresses; we will never forget her aging drug-addicted grandmother in Fabulation at the old Public Theatre.  Here, she invisibly dons Rose’s skin so completely that she erases any perception of a performance.

Roderick Randle is just passable as Cory, not really communicating the melding of banked fires of respect and resentment that the son is struggling with as he leaves adolescence. The one exception is when Randle’s Cory faces down his father. Suddenly, Randle fully inhabits Cory as if he was breathing life into a previously deflated shell.

André L. Gainey, a veteran of AAPACT and M Ensemble productions, brings a tireless smile and sparkle in the eyes to Troy’s loyal sidekick, Bono. Charles Bonamy makes a solid impression as Troy’s mentally ill brother who roams the streets thinking he is the Archangel Gabriel calling out to St. Peter with a gravelly hoarse voice. Darryl Vaughn is convincing as the older son Lyons who hides his wastrel ways behind a passion for playing jazz in local clubs.

It does not…  take a Broadway budget or cast to make Fences connect with an audience. That’s clear from theatergoers’ responses to the new African American Performing Arts Community Theatre production of the play at Miami’s African Heritage Cultural Arts Center.

Staged by Theodore “Teddy” Harrell Jr., AAPACT’s Fences competently, sometimes movingly, fits together the puzzle pieces of Wilson’s plot. However, the sound within the theater and the actors’ articulation make certain lines muddy or unclear, and in a Wilson play, every word counts.

Robinson’s powerful, physically imposing Troy achieves an easy camaraderie with Gainey’s Jim, and the actor conveys a real connection with Johnson’s Rose. He doesn’t stint on the behavior that makes an audience recoil from a complicated man.

Just as Rose is the sensible rock of the Maxon family, Johnson is the artful heart of this Fences. Her Rose is attentive, nurturing and pragmatic. And when her beloved husband reveals a secret that torpedoes years of trust, Rose’s furious response is masterfully delivered by Johnson.
A masterful storyteller whose language flows like music, Wilson left a grand legacy for the artists and audiences. If AAPACT’s Fences doesn’t hit every note, it still allows its audience entry into a deeply resonant world.

The 1987 Pulitzer Prize-winning Fences is receiving a revival from the always-solid, occasionally dazzling African American Performing Arts Community Theatre (which, despite its name, is a professional playhouse).

Robinson has the most difficult role — his character, Troy, has the most lines, the most movement, and the most complexity. He needs a little more polish. From the opening scene, his strenuous efforts pour down from his shaved head in glistening beads of sweat — the toil of his craft and of Troy's hardscrabble job. He is animated and gripping when recounting Troy's exhausting monologues about wrestling with Death or cutting deals with white devils.

Carolyn Johnson… is never less than marvelous — fully formed and rich in gesture, as convincing as a long-suffering but loving wife as she is a jilted, unforgiving victim.  …She has a subtle command of both her husband and the stage that is mesmerizing to watch, and she's the best reason to see this production.

The supporting players turn in fine, unassuming performances, with the genial Gainey helping to bring the larger-than-life Robinson down to earth and Vaughn capturing Lyons' big-city smoothness.

Dudley Pinder built the appropriately shabby but stable back porch using wood that's seen better days, along with fences on both sides and a makeshift ball of string dangling from a tree that characters whack with a baseball bat.