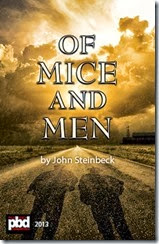 Palm Beach Dramaworks opened its production of John Steinbeck’s Of Mice and Men on October 11, 2013.

Of Mice and Men is the story of George and Lennie, two drifters who dream of a better life. George takes care of and protects sweet but simple-minded Lennie, who is unaware of his own brute strength. After Lennie unintentionally commits a terrible act, George must determine his friend’s fate. The play is inspired by Steinbeck’s days as a manual laborer; Lennie is based on a real person.

John Steinbeck, chronicler of the Depression-era common man, has created many indelible characters, but few resonate with us with the impact of those odd couple drifters, George Milton and Lennie Small, in Of Mice and Men.

Finding two towering actors for these central roles is crucial to the success of bringing the literary classic alive, and Palm Beach Dramaworks has a pair of remarkable performers in John Leonard Thompson and Brendan Titley. But almost as crucial is the rest of the company, filling out the migrant farm community, and in that, director J. Barry Lewis has cast well and knit them into a worthy ensemble.

Returning to Dramaworks as George is Thompson… wiry and slight, at least in contrast to Titley’s Lennie. We instinctively see why Lennie is dependent on George, but Thompson makes us see that the need for each other is reciprocal, that George relies on Lennie’s utter belief in their dream to sustain him.

Thompson is the cornerstone of the production, in the less commanding role. Perhaps it is inevitable that Titley draws our attention and wins our affection as feeble-minded, but content Lennie. Making his Dramaworks debut, Titley displays the character’s mental struggles in his facial expressions and draws us inside his head as Lennie grasps for understanding.

...what gives the play a richness and period significance is the way the rest of the characters reflect those hard-scrabble times. Long before there was a social safety net, an aged, mangled character like Candy (another fine performance from Dennis Creaghan) knows he has outlived his usefulness and is expendable…  Then there’s Crooks, a black man in a racially unenlightened time, relegated to the barn instead of the bunkhouse. But W. Paul Bodie… takes him beyond a symbol, investing the character with unexpected dignity.

Betsy Graver is convincing as trouble from her first cat-like entrance, but she too becomes fully dimensional in a second-act scene sharing her hopes with Lennie. In addition, Lewis draws fine work from Cliff Burgess as foreman Slim, and Frank Converse is a stern presence as The Boss.

…Of Mice and Men is another stage classic that Dramaworks could never have done justice to in its smaller theater. Certainly, it could not have had the visual impact it has here, thanks to Michael Amico’s versatile unit set of rough-hewn wood and corrugated metal. In a nice touch, he includes two trap doors for a babbling brook and a campfire. The scenic design works well with John Hall’s lighting, particularly the searing shafts of sun and shadow in the barn.

In Palm Beach Dramaworks’ rendition of the 1937 play adapted from the classic novella, John Leonard Thompson’s and Brendan Titley’s performances are the blazing campfire around which everything warms its hands.

Thompson’s natural intensity is ideally suited for the tightly wound George.  Titley quickly commands equal measures of sympathy and dread for the child-like Lennie, whose limited intellect is unable to govern his frightening physical strength.

Director J. Barry Lewis’ poetic approach lends dignity to the undernourished lives Steinbeck portrays, without sacrificing the tension that leads to the story’s tragic conclusion. His use of scene-setting descriptive passages from the book is especially effective.

Michael Amico’s set, combining weathered wood and a hint of mountainous landscape, deftly suggests the ranch where George and Lennie have come to work and the verdant Salinas valley that cradles it. John Hall’s lighting design rises from subtle backdrop to visual feast in the devastating climax, when a wash of golden light through gaping boards caresses Lennie’s violent outburst.

Dramaworks’ touching production makes it easy to understand why George and Lennie remain two of the most iconic characters in American literature.

John Steinbeck’s Of Mice and Men plays at Palm Beach Dramaworks through November 10, 2013.