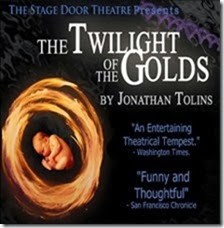 The Stage Door Theatre opened its production of Twilight of the Golds on September 20, 2013.

If your parents knew everything about you before you were born, would you be here? That is the question posed in this entertaining drama.  An intriguing play that asks what a couple would do if science could tell them that their child would be born gay.

Tolins’ thought-provoking script is uneven and Stage Door’s production has strengths and weaknesses. But under Michael Leeds’ direction, Twilight emerges as a moving tragedy spiked with surprising amounts of comedy as well as compassion.

Other than Hesse’s winning performance, which is supposed to be a bit theatrical, there’s something unreal and stagy about the entire production. Spear, Bramble and even Miller have trouble making their characters seem more than stock characters for much of the play. But in those monologues, suddenly every actor shines, especially Spear and Bramble. Spear, in particular, reveals a depth of rueful emotion at a world with “too much information.” Her Phyllis may be deeply upset by modern life, but she deals with it by silent acquiescence and, in that moment, Spear makes that choice plausible.

Leshansky’s work is perfectly serviceable as a husband admirably supportive of whatever his wife wants, but who would be happy to have this cup pass by. Miller is weaker than the rest of the cast, passable in the part but not as vibrant as the others. Her nasally voice doesn’t carry the same dramatic heft as the rest, although it was stereotypical Jewish American princess.

On the plus side, once again, Stage Door’s team keeps delivering better and better production values. Co-founder David Torres has designed a lovely Ikea-inspired apartment... The set has been deftly lit by Ardean Landhuis... Torres has skillfully woven in passages of opera that underscore the familial strife on stage.

Stage Door’s production of Twilight is reliable enough to give patrons something to talk about on the ride home. It also extends the string of steadily improving work worth seeing that has included A Shayna Maidel and Brighton Beach Memoirs.

In director Michael Leeds’ well-staged new production at Stage Door Theatre in Coral Springs, neither the play’s focal family nor its driving crisis is any more tolerable than they were in 1996 when the late producer Brian C. Smith presented Twilight of the Golds… It’s tough to root for or empathize with anyone in the play, except for gay brother David Gold (James Hesse), a Metropolitan Opera scenic

Understand, Stage Door’s production is well executed, with good scenic design and sound by David Torres, lighting by Ardean Landhis and costumes by Peter Lovello. The actors fully commit to their characters, warts and all, and the charismatic Hesse persuasively delivers the playwright’s point of view.

But Twilight of the Golds is no Normal Heart or Angels in America. Yes, it’s true that hatred and homophobia still exist, despite so much progress in the two decades since Tolins’ play debuted. But this is one play that cries out to be buried, not revived.

Twilight of the Golds plays at the Broward Stage Door Theatre through October 27, 2013.
Posted by C.L.J.