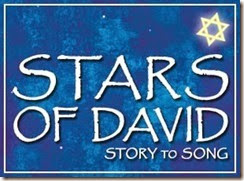 Stars of David: Story to Song opened for its world premiere at the Broward Center for the Performing Arts on December 23, 2014.

A funny and captivating new musical revue, based on the best-selling book by Abigail Pogrebin, celebrates the lives of your favorite Jewish stars and public figures. Humorous and human songs shed light on Gloria Steinem, Aaron Sorkin, Gwyneth Paltrow, Norman Lear, Joan Rivers and many others, with original music by Broadway's finest composers and lyricists. Enjoyable and engaging entertainment, whether you are Jewish or not!

Seeking an answer to “Who am I?” is the defining journey of most lives, and our religious heritage is part of the eternally elusive solution, even if we don’t embrace that religion or its culture.  Such is the soul of Stars of David: Story To Song, a musical revue, which, despite its cripplingly kitschy title, is a surprisingly entertaining, witty and poignant look at how Jewish-Americans struggle on that journey.

The raw material is drawn from a 2005 book Stars of David: Prominent Jews Talk About Being Jewish in which former 60 Minutes producer Abigail Pogrebin interviewed about 60 notables. She, director Gordon Greenberg and conceiver Aaron Harnick turned it into a play with Charles Busch in 2012 in Philadelphia, later scrapped Busch’s script and created a concert-like show that bowed off- Broadway last year under the aegis of famed producer Daryl Roth.

The performers embrace the energetic, infectious joy of the piece including Avi Hoffman (who developed the Too Jewish series), local veteran Patti Gardner, the ubiquitous Mike Westrich and out-of-towner Cassie Levine, accompanied on the piano by Caryl Fantel. They have been guided by the show’s original director and writer Gordon Greenberg and musical director Eric Alsford.

Among the scores of interviews with Norman Lear, Michael Feinstein, Scarlett Johansson, Steven Spielberg and many others is the distinct sense of pride and confusion and searching, culminating in a reinforcing validation that you’re not searching all alone.


We actually thought there were more reviews, but it turns out that the Miami Herald and the Sun-Sentinel used Bill Hirschman’s.  Great for Bill, lousy for theater lovers.  Thanks for nothing, Aminda Marqués Gonzalez and Howard Saltz.

Stars of David: Story to Song plays at the Broward Center for the Performing Arts through January 4, 2015.
Posted by C.L.J.