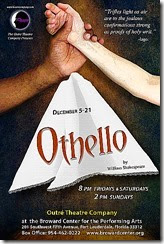 Outré Theatre Company opened its production of Othello at The Broward Center for the Performing Arts on December 5, 2014.

Hate. Desire. Jealousy…Love.
William Shakespeare’s powerful tragedy tells us of a love that defies the boundaries of race, and of a hate that defies the boundaries of reason. Othello, a Moorish general in the employ of a European power, defies the conventions of his culture to marry a European woman and to rise through the ranks to become a respected and powerful soldier. But his misplaced trust in his ensign, Iago, leads him to discard it all as Iago manipulates and twists the soul of a noble man. Dealing with such varied themes as race, class, jealousy, and trust, Othello is a study in the self-doubt and fear that resides in the hearts of us all.

…Shakespeare is the Everest of mainstream theater; not every attempt, even by experts, reaches the summit.
Audiences need to savor the undeniable virtues and achievements — even when counter-balanced by well-intentioned even courageous but equally undeniable flaws and shortcomings.
Such is the case with the laudable Outré Theatre Company production of Othello imaginatively directed by Christina Groom, and featuring Troy Davidson in a persuasive performance that brings credibility to the sadistically difficult role of a man insanely in love with his wife one minute yet easily duped the next into believing her unfaithful.

Its major asset… is Davidson.He has long been one of those really talented performers yet to be recognized by mainstream audiences… From the moment he enters with that stately dignified mien, heavy-lidded eyes and confident smile, the production elevates several notches. His resonant baritone caresses the Moor’s longer speeches with an analytic intelligence and a contained passion. Davidson makes believable the tough transition as Othello’s adoration for Desdemona is visibly infected by doubt and then blossoms quickly into a murderous volcanic rage.

Fortunately and miraculously, Cherie is capable of making believable Desdemona’s deep and steadfastly abiding love even as her beloved unjustly accuses her of being unfaithful, a patently ridiculous suspicion. Without seeming a dewy naif, Cherie’s eyes brim with bewilderment and pain at this inexplicable change in the man she loves.

Skye Whitcomb… takes on Iago with mixed results. He’s comfortable with the language... What’s crucially missing is Iago’s curdled soul and manipulative genius that makes it clear from the opening moment of the play that the warrior and tactician Othello is way outclassed, even doomed by Iago’s malignant intelligence.

Groom, it must be said, is one of the best actresses in the region and, frankly, one of the few proven regional talents in Shakespeare, as seen in her turns as various characters in New Theatre’s Henry V in 2011. She’s directed some Shakespearean comedy and we want to see her do more... She’s hampered visually by the platform stage at the Abdo New River Room at the Broward Center... It isn’t very deep, so many of her stage pictures are one-dimensional with characters arrayed across the stage in a single line or they stand talking to each other in profile. On the other hand, she offsets this by having them move around a good deal, providing some kinetic energy to the talky proceedings.

You have to give props to Groom, Outré and the cast for a noble attempt that has honestly praise-worthy elements. Besides, many would contend that flawed Shakespeare is better than no Shakespeare.

Outré is launching its Fort Lauderdale presence with Shakespeare’s Othello, a large-scale and challenging choice. .. Staged by Christina Groom, Othello remains what it has been for more than 400 years — a rich and towering tragedy about manipulation, political scheming, deadly jealousy and, yes, racial prejudice.

The strength of Outré’s production flows from its four leading actors and from Rayner G. Garranchan as the decent, victimized Cassio. The four leads — Troy Davidson as Othello, Faiza Cherie as his wife Desdemona, Whitcomb as the dastardly Iago and Gore as his ill-used wife Emilia — handle the language well and inhabit their characters in an engaging, believable way.

Davidson… is a striking, self-assured, even egotistical Othello. As he succumbs to jealousy, that thing Iago describes as a “green-eyed monster,” his haughtiness and brutality grow, yet the actor also conveys Othello’s physical and emotional weakness.

Whitcomb plays Iago as a smiling, relaxed, easy-breezy schemer. Lying is as automatic as breathing for this man whose simmering, largely hidden emotion is rage, hence his penchant for eliminating impediments to his will...

Cherie’s radiant Desdemona is a porcelain innocent, a woman with the strength to defy her father but no will to flee her increasingly abusive husband. Gore’s decent Emilia is similarly obedient, then victimized by a husband who is a master of the art.

Outré’s Othello is more decent than dazzling. But it marks the beginning of what all involved hope will be a fruitful artistic presence in Fort Lauderdale.

Oh, sure, the tragedy gives the Moorish general Othello top billing, but Iago is the engine who sets the play into motion and drives the pace. And this "Othello," staged by Outre Theatre Company at the Broward Center for the Performing Arts in Fort Lauderdale, has a good Iago (a seething and wild-eyed Skye Whitcomb), poisonous and pernicious against Othello (an elegant Troy Davidson).

While the play still opens in Venice before moving to Cyprus, director Christina Groom has transplanted the action to the 1950s, during the Cypriot civil war in the Mediterranean island nation. This mostly works, laying down a grid to visually map the Shakespearean language from the early 1600s.

While Faiza Cherie's Desdemona and Sabrina Lynn Gore's Emilia are particularly in sync with their roles and dialogue, the rest of the cast is not always adept with the musicality and rhythm of Shakespeare.

Outré Theatre Company presents its production of Othello at The Broward Center for the Performing Arts through December 21.