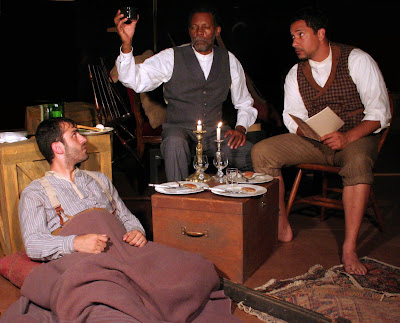 The Caldwell Theatre Company opened its production of Mathew Lopez' The Whipping Man on August 12, 2009.

The day Lee surrendered to Grant was the first day of Passover in 1865, and the play takes place during the middle of that period. The house was once the grand home of the DeLeons, an influential, Jewish, southern family. The DeLeons' slaves adopted their faith. The former slaves and self-identified Jews are forced to face their own contradictions as they celebrate the historic freeing of the Hebrews from captivity.

The Palm Beach Post reports that this run has been extended through September 6!

This production... features an elegantly faded set, tattered clothes and unshaven faces. There is a dark, gruesome reality to Caleb's injury, and the amputation of his leg, that help to flavor this piece from the beginning. Nick Duckart as Caleb palpably swallows his fears and secrets. Though he is a man, there is the essence of him still being the callow, privileged child groomed to be the master. Brandon Morris as John sounds a bit too contemporary in his speech for a slave born in this time. His restless energy and intensity feel just right for the role, however. John Archie as Simon is at once strong, wise, and filled with anguish. Simon really owns his character and this play from start to finish with a truly commanding performance. With a good script and some fine acting, this play is well worth seeing.

The Whipping Man, by Adam Lopez, is the second show of (Cholerton's) run as EAD, and at this moment in South Florida theater, there is nobody stomping on the terra with such ferocity as he.

...The Whipping Man is anything but superficial. It digs, painfully and shockingly, right down to the marrow.

Most of Brandon's review is an examination of the story and its characters: it seems that he's once again failed to separate the actors from the roles they are playing. That's not necessarily a bad thing; while it doesn't give the actors anything to paste in their scrapbook, it does mean that they are identified as completely with the characters as anyone could hope for.

So we can take it as stipulated that the players hit the mark, given Brandon's conclusion:

The Whipping Man is a wonderful play for this single scene and for a dozen others. See it and feel rare things. And when the specific effects of this play wear off, take a few seconds to marvel at the happy fact that in Boca Raton, at the Caldwell's grand digs, a powerful voice in South Florida theater is just beginning to clear his throat.

Clive Cholerton, the new artistic director at Boca Raton's Caldwell Theatre Company, kicked off his tenure recently with the sizzling world premiere of Vices: A Love Story. His gripping new production of The Whipping Man further demonstrates that under Cholerton, the Caldwell is becoming a different theater -- and so far, an exciting one.

Cholerton directs with the surest of hands, bringing out the script's comedy (yes, there are laughs), the altered power structure within the home, the story's historic resonance. Set designer Tim Bennett delivers the stripped shell of a home, and costume designer Alberto Arroyo contributes distressed period clothes that look as though they smell bad.

...Cholerton's best decisions were his casting choices. Duckart plays Caleb's unenlightened, entitled attitudes, but he blends just enough vulnerability into the character that he becomes someone richer than a villainous caricature. The charismatic Morris also straddles a line, this one between cockiness and fear. Archie, first among equals, is simply mesmerizing -- commanding, real, tender, raw.

....Clive Cholerton’s careful direction... immediately gets your attention and sets the stage for an absorbing 90 minutes of theater you shouldn’t miss.

All three actors turn in bravura performances. Morris is particularly mesmerizing as he recalls the days he was sent to the Whipping Man, vividly described as a man who reeked of whiskey and sweat. With a thundering stomp and clap, Morris skillfully commands the stage and will make you feel his character’s pain much like Denzel Washington did in the movie Glory as that single tear slowly spilled down his cheek.

It begins slowly, but gradually gathers momentum as national scars merge with personal histories, not unlike the apartheid saga of Athol Fugard’s Master Harold . . . and the Boys.

Carbonell Award winner John Archie heads the cast as amateur surgeon Simon, who towers over the production... Brandon Morris, recently relocated to New York, returns to South Florida to play John, a seething, bitter former slave whose own liberation is underscored by his preoccupation with liberating property from nearby homes. He, too, is harboring secrets and they surface with visceral impact.

Rounding out the dramatic triangle is New World School of the Arts graduate Nick Duckart as Caleb, able to hold his own against his two veteran cast members...

While other area troupes devote the summer months to lightweight fare, the Caldwell has counter-programmed with a dramatic script that would be welcome in any season.

The Whipping Man plays at Caldwell Theatre Company through August 30 extended through September 6!