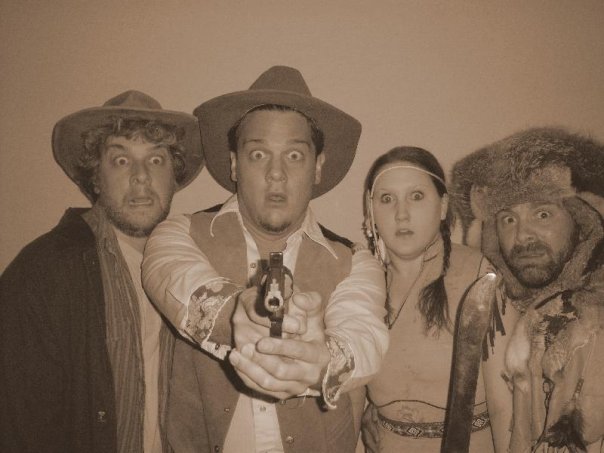 The Promethean Theatre Company opened its production of CANNIBAL! The Musical Live On Stage on August 21, 2009.

Cannibal! is a perilous tour de force filled with cowboys, horse-love, snowmen, evil trappers, the Cyclops and other unthinkable horrors…including toe-tapping tunes! Don’t miss this cannibalistic cowboy musical. The most terrifying, gut-wrenching and hilarious musical since The Sound of Music.

If this sounds like your bag...you will have a fantastic time watching Packer deal with gay Indians who speak pig Latin (probably a pun on Packer's real-life Indian benefactor, who had a very pig-Latinate-sounding name: "Chief Ouray"), a pus-squirting Cyclops (probably a pun on I-don't-know-what), and what seems like a dozen gallons of blood splashed willy-nilly all over the stage. If this doesn't sound like your bag, stay away. No kidding. This ain't Oklahoma!

As a 26-year-old male with a hard-on for death and destruction, I find Cannibal! to be very much my bag. So I can sit back, hip and unscandalized, and groove on the subtlety of Daniel Geldmann's set, which incorporates a delightful gimmick for allowing credible decapitations. And I can appreciate the subtle artistry of actors Chizever, de la Cal, Jeffrey Bower, James Carrey, Sean Muldoon, and Patrick Jesse Watkins as they find new ways of bringing humanity to the act of going mad and eating your friends. I can marvel at the level of thought and dedication brought to the production by Noah Levine and David Meulmans, who are not merely gay Indians but very particular and gorgeously articulated gay Indians whom we are helpless not to love as they go swishing across the Great Divide.

...the Promethean’s production is more likely to elicit giggles and guffaws than cries of gruesome horror

As Packer, square-jawed, big-voiced Matthew William Chizever wrings his musical tribute to her (When I Was on Top of You) for every single-entendre laugh.

Much of the show’s humor tends towards the downright silly, and apparently neither Parker nor Promenthean resident director Margaret M. Ledford ever met a blood squib that they didn’t like.

The miners, led by Jeffrey Bower as a religious zealot, are a rough-and-tough bunch, until called upon to execute Chrissi Ardito’s choreography, a cross between moves from The Unsinkable Molly Brown to West Side Story.

A trio of pig Latin-spouting Ute Indians are anything but straight and Ken Clement has fun with a self-reverential role known as -- what else? -- Judge Ken.

Considering how easily the company has made the transition, you would never guess that this is their first foray into musical theater. But judging from the sold-out Sunday matinee attended -- populated by more theatergoers than I have ever seen at a Promenthean show -- it seems unlikely that this will be their last.

It’s sophomoric…downright silly…and laughable. Yet, if you like corny moments while actually getting to know the true story of the only person in America ever convicted of cannabilsm, you should treat yourself to a feast of musical fun by joining the crowds at The Promethean Theatre’s Black Box at Nova Southeastern University in Broward County.

Director Ledford has put together an interesting ensemble to initiate the company’s first foray into musical comedy. Matthew Chizever is a charismatic hero (a goofy rendition of the lead in Oklahoma), while Anne Chamberlain as the vocalizing sob-sister reporter, Jeffrey Bower, Patrick Jesse Watkins, Phillip de la Cal, James Carrey, and Sean Muldoon as the miners, Andy Quiroga, William Adams and Noah Levine as the evil trappers all add to the madness.

Give a hand, as well, to musical director and piano accompaniest Mark Fiore who adds some familiar tunes, along with the original music, and Chrissi Ardito for choreographing a bunch of rough cowboys who think they are dancers in West Side Story. How crazy can you get?

The Sun-Sentinel sent Rod Stafford Hagwood to inflict us with yet another very poorly written review article piece:

But you need to know that you sit in the front row of Cannibal! The Musical at your own peril; for among other things, it is like a splatter-fest Gallagher concert with bodily gore replacing bashed watermelons.

And here's the other thing about Cannibal: You can't take neat little bites out of something like this, you have to gorge yourself.

And for the most part The Promethean Theatre does go all-gourmand on this gruesome staging at Black Box Theatre at Nova Southeastern University.

And this Cannibal cast handles the material — just as twisted and sophomoric as any Parker project — with zest. Matthew William Chizever as Packer reveals a lilting quality in his voice with his love ballad "When I Was on Top of You" sung to his horse, of course. Anne Chamberlain is a hesitant Polly Pry, coming to life for her one song, "This Side of Me."

OK, at least they did send someone instead of regurgitating the Herald again. But why does it have to be Hagwood? I can't believe the man ever took a writing course that he passed. I think the Sun-Sentinel hates its readers. That must be it. They hate us and resent us, so they punish us by printing Hagwood's fragmentary excretions.

The Promethean Theatre... has turned a tale Parker wrote as a student film project into a sprawling, blood-spattered summer musical. Plenty of the humor is sophomoric (you could say the same about South Park), but, hey, it works. And by the time you've finished laughing or groaning, the cast is already selling the next nutty plot twist or bad joke.

The guy who (with Matt Stone) would later create Stan, Cartman, Kyle and Kenny puts his own spin on the story of an American cannibal. And what the creative team at Promethean has done with Cannibal! The Musical Live on Stage makes it even crazier, if that's possible.

Think of the show as Oklahoma!, only with blood, gleeful gore and unprintable language. Director Margaret M. Ledford goes for every last gross-out laugh, and the cast earns plenty of them. Chrissi Ardito contributes square-dance-influenced choreography, Ellis Tillman an array of crazy costumes and Daniel Gelbmann a set that allows ``blood'' to be mopped up quickly, one of this show's key requirements. Musical director/pianist Mark Fiore contributes his own little jokes, suddenly drifting into snippets of the themes from Bonanza and Law and Order, serving up a bit of Beat It and Stairway to Heaven.

The show's own music is relentlessly cheerful and unremarkable, except for a lovely solo beautifully sung by Anne Chamberlain as Polly Pry. The cast, which includes Ken Clement as a judge who makes fun of Ken Clement the actor, understands the key truth necessary to pulling off Cannibal! The Musical: Leave subtlety in the dressing room.

CANNIBAL! The Musical plays at The Promethean Theatre through September 6.
Posted by C.L.J.