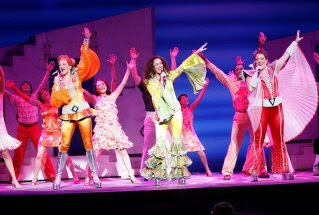 Mama Mia has blown through South Florida three times in the last three years., and it's played Palm Beach three times in the last five. Now it's the Kravis Center's turn to (again) host the show that inspired the term "jukebox musical."
Kevin D. Thompson reviewed for the Palm Beach Post:
As part of its national tour, Mamma Mia! made its Kravis Center premiere Tuesday night.
(Someone might want to let Kevin know that it wasn't a premiere)

While the show unquestionably remains the lovably kitschy, candy-colored concoction it’s always been, it fell somewhat short of all the hype surrounding it.

Mamma Mia! doesn’t work as well as it could have mostly because at times it’s difficult to understand the lyrics written by Benny Andersson and Bjorn Ulvaeus. The orchestra had the annoying tendency of drowning out the actors’ singing voices. This happened way too often to Dawson, who has a lovely voice when you could actually hear it. That only made it harder to emotionally invest in the characters when you actually wanted to.

Also, Bill and Harry, who serve as good comic relief, came off a little too goofy. Kinda like cardboard characters on a sitcom. When it came time to flex their dramatic muscles, neither actor was really up to the task and their moments with Sophie fell a little flat.

Kevin gives it a B-, but he gets a "C" for not knowing the difference between a premiere and and a repeat visit.
Hap Erstein reviewed it for Palm Beach Arts Paper:

The performers sing well enough -- very well in Dawson’s case -- but most of the characters have become broadly cartoonish.

Director Phyllida Lloyd is a theater and opera veteran who took her first plunge into musicals with Mamma Mia!, staging the traffic efficiently enough, but never figuring out a reason for us to care about these people. Still, she is obviously more comfortable with live theater than she is with film, as the only thing more inept than the stage show is the 2008 movie. Susan Stroman (The Producers) is off the hook for the least talented film debut by a stage director learning on the job.

In any event, for those legions of Mamma Mia! fans, the road company is delivering the full silly experience, along with Anthony Van Laast’s calesthentic choreography. It is a featherweight show, exactly as intended, and the first two-and-a-half hours are mere preface for the extended curtain call.

Few of the voices were up to Broadway standards and the backstage chorus was so bad that it called up images of karaoke. The chorus either drowned out the lead vocalists or stumbled in on the wrong beat. The staging was sloppy and the choreography far from crisp.

This is the third time the musical has visited the Kravis Center. Perhaps, the producers have concluded that Mamma Mia's hype is so dazzling that no one will notice how much they've skimped on quality.

Michelle Dawson made a fetching Donna, and her deep voice suggested diva potential. Thanks to the unfortunate musical direction that promise was never realized.

Other singers who deserved better include Adam Jacobs, as Sky, Sophie's fiance, who with any luck will find a vehicle better than this one for his charismatic talents.

John Hemphill portrayed a likeable Sam, Donna's long-lost love, and again, had a pleasing voice, when it could be heard.

This production retains enough of the original's charm to please those who are determined to enjoy it. Otherwise, don't bother.

Ouch! I guess Jan's not a big enough ABBA fan to be lulled by the score.

Mama Mia! plays at the Kravis Center through this Sunday, August 9.