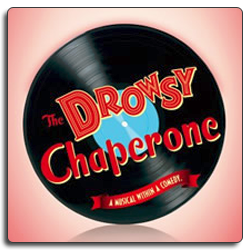 The Stage Door Theatre opened its production of The Drowsy Chaperone on June 11, 2010.


Welcome to The Drowsy Chaperone, the musical comedy with tons of laughs and the most 2006 Tony Awards of any musical on Broadway. It all begins when a die-hard musical fan plays his favorite cast album, a 1928 smash hit called The Drowsy Chaperone, and the show magically bursts to life. The audience is instantly immersed in the glamorous, hilarious tale of a celebrity bride and her uproarious wedding day.

Much of the credit goes to the company’s former artistic director,‭ ‬Dan Kelley,‭ ‬who stages the production deftly with a perpetual wink as well as playing the show’s central character,‭ ‬known simply as Man in Chair,‭ ‬with complete commitment to his musical comedy world.‭ ‬Every now and then one sees an ideal match of performer and role like this.‭ ‬If Man in Chair were not written as a wedding gift for Bob Martin,‭ ‬one of the show’s co-authors,‭ ‬you would swear it was tailor-made for Kelley,‭ ‬fluttery hands and sly comic takes and all.

The Drowsy Chaperone is not a great show for the ages.‭..‭ ‬But it is a lot of fun,‭ ‬and Kelley’s production delivers on every wacky bit of schtick it contains.


One cannot help but compare productions, and having seen two national tours of the same show, this one shines for some extraordinarily good directing by Dan Kelley.

The scenic design is right on the money, complete with a refrigerator and a Murphy bed that double as an entrance for the characters of the musical within the show. The costumes, especially for the men, are sensational in their attention to detail, use of color, and exaggerated period style.

As Man in Chair, Dan Kelley shows an artful awareness of the audience that helps make the character's conversations with the audience seem impromptu.

Eileen Faxas is tops as the drunken diva, the Drowsy Chaperone. This is a great role for her to showcase her comedic ability... and Faxas really delivers.

This delightful production of The Drowsy Chaperone at the Stage Door Theatre is a welcome and entertaining Summertime offering.


The Stage Door Theatre in Coral Springs is currently staging a handsome production of the Tony-winning musical The Drowsy Chaperone.

Kelley’s Man in Chair has the required wistfulness and enthusiasm, but ultimately he comes off as more bitter than endearing. The show really comes to life with Oldham’s appearance, belting out the show-stopping “Show Off.” Oldham sparkles in the role, even when everything around her falls flat. The other terrific show-making performance comes from Matt Ban as pudgy, over-the-hill Latin lover Aldolpho. Ban’s teeth marks are all over the scenery, which is perfect for his character.

Chrissi Ardito’s choreography adds dazzle to the production, while the lighting and set design by Ardean Landhuis are clever and evocative. Kimberly Wick’s smart costume choices enrich the nostalgic mood of the show.

...it’s a pleasant and delightful diversion.


Dan Kelley, endearing as Man In Chair, doesn't just watch the show, he wanders in and out of it, revealing, explaining and delivering some of the funniest lines in a piece that's full of funny stuff....There's a lot going on and the seventeen person cast delivers every bit of pleasure therein.

A tip of the topper, though, to Laura Oldham performing “Show Off.” And Matt Ban in “I Am Adolpho.” And, aw hell, everyone else performing all the other numbers. They were perfectly swell.

Production values are uniformly high, with direction by Dan Kelley, assisted by Chrissie Ardito who also did the wonderful choreography... And the costumes, ah the costumes, they're by Kimberly Wick.

There's a lot of good theatre going on around here this year and this show is right up there at the top with its excellent direction and strong, talented cast.

Bill Hirschman reviewed for The Sun-Sentinel:


As star and director, Kelley has nailed the deceptively difficult tone of Drowsy — an affectionate spoof of 1920s paper-thin musicals mixed with a joyous message about the power of artistic artifice to enrich our troubled lives. Other than last season's A Little Night Music, this easily ranks as the best work that Stage Door has produced in years.

Rubber-faced, inherently funny and vulnerable, Kelley was born to play the woebegone narrator, capturing his adoration of musical theater as essential as oxygen to his ability to gingerly face the prosaic and treacherous vagaries of real life.

The unusually solid supporting cast is led by Laura Oldham as the perky, plucky bride-to-be, Janet van der Graaf. She needs no spotlight to shine in her major turn in which she protests "I don't want to show off no more" while dancing her shoes off, trilling and belting, doing splits and gurgling ventriloquism.

Chrissi Ardito once again provides quality choreography and helps Kelley with the direction since he is on stage for 98 percent of the show. Stage Door's restricted budget hasn't stinted on Adrean Landhuis' set and Kimberly Wick's costumes. The pre-recorded score by David Cohen is satisfyingly crisp and lush.

The Drowsy Chaperone plays at The Stage Door Theatre through July 25, 2010.
Posted by C.L.J.