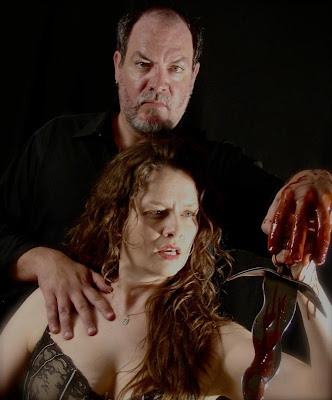 Palm Beach Shakespeare Festival opened its revival of Shakespeare's Macbeth on July 15, 2010, at the Seabreeze Ampitheatre.  This marks the third time the company has mounted "the Scottish play."  It was the Festival's first production back in 1988, and they did it again 14 years ago, with the same Macbeth and Lady Macbeth.


Directing the production and playing the title role is Kevin Crawford,‭ ‬long the company’s best asset.‭ ‬His performance dominates the evening with his signature skill with the Elizabethan language,‭ ‬rendering the text with clarity and attention to the poetry.

Crawford is again partnered by Heidi Harris as his goading wife,‭ ‬who pushes him to take control of the political situation and realize the royal prophecy of the witches.‭ ‬In the intervening years,‭ ‬Crawford has grown burlier and Harris more buxom,‭ ‬but they still make a combustible couple,‭ ‬striking sparks of passion onstage while rendering these two towering roles with greater maturity and nuance.

Concentrate on Crawford and Harris,‭ ‬because the performance quality drops off substantially when it comes to the supporting players.‭

The Palm Beach Shakespeare production of MacBeth plays at the Seabreeze Ampitheatre through July 25, 2010.
Posted by C.L.J.