Ground Up and Rising: The Pillowman (3 reviews) 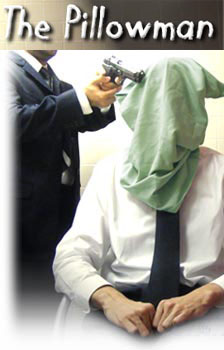 Ground Up an Rising opened its production of Martin McDonagh's The Pillowman on July 23rd, at the Little Stage Theatre at SoBe Arts.

Winner of the Olivier Award and Tony Award for Best Play, The Pillowman  by Martin McDonagh centers on a writer in an unnamed totalitarian state who is being interrogated about the gruesome content of his short stories and their similarities to a series of child murders. The result is an urgent work of theatrical bravura and an unflinching examination of the very nature and purpose of art.


Murder and imagination take centerstage in the harrowing play, The Pillowman, by Martin McDonagh, now enjoying a strong production by the Miami theatre company Ground Up and Rising.

The cast is excellent.  As Katurian, Belz first comes off like a two-bit petty thief, but his performance evolves and matures over the course of the play, transforming Katurian into a sympathetic antihero.  Sylvain mines the gold from his richly drawn character, in both his violent outbursts and his epiphany.  McKinney’s performance is controlled and compelling–he can do more with silences and a smile than most actors can do with a page of dialogue–and he is riveting to watch.

The most impressive performance, on stage and behind the scenes, is from Carmouze, who also directs.  As Michal, he has just one extended scene, but he’s so natural, so realistic, that his performance is both funny and heartbreaking.  His direction wrings both the horror and humor from McDonagh’s play.

Eileen Spiegler wrote about it, "special" to the Miami Herald:


The Ground Up & Rising cast does its best with the often rambling dialogue, especially McKinney and Sylvain in their good cop/bad cop patter. There's a snap to their exchanges that makes you want them to keep talking (``He's so moody,'' Tupolski sighs of Ariel's bursts of violence). The problem is, they don't seem dangerous.

The play is missing a sense of the sinister, in large part because of McDonagh's meandering, overlong script. Ominous music in scenes might be meant to punch things up but only makes the lack of tension more obvious. And while the comic lines come easily, they don't elicit the nervous, uncomfortable laughs jokes about torture should.

Gee, it's nice to go to a little black box theatre, see a show put on by a small company with little money, and just enjoy the hell out of it because of the acting. That's all you really need, the acting. And the story. So if you put Ground Up & Risings' terrific cast into Martin McDonagh's The Pillowman you get an evening that's enthralling.

Katurian, the writer, is played by Curtis Belz, new to me but an actor I'd like to see again, and very soon. Sheaun McKinney is Tupolski, the “good” cop who is anything but, and Bechir Sylvain is the “bad” one. Both have a lot going on.

Arnaldo Carmouze doubles as both ingenious director and actor and, despite the old adage, fills both roles very well indeed. His Michal, the slow brother of Katurian, is wonderfully knowing. No bumbling idiot here. Belz and Carmouze are a delight to watch together. There's love on the stage with these two.

Ground Up and Rising presents The Pillowman at the Little Stage Theatre through August 8, 2010.
Posted by C.L.J.