The Miami Herald reports that Jack Horkheimer, The beloved Star-Gazer, has died at age 72.

When I first moved to Florida back in 1985, my grandmother dragged me in front of the TV one night.  "Have you seen this guy?" she asked.  "He's terrific."  Jack was perched on the rings of Saturn, telling us what wonders we should step outside and look for.  "...and Keep... Looking... UP!"

Back in 2003, Actors' Playhouse was mounting a production of Return to the Forbidden Planet.  It's loosely based on the classic sci-fi movie Forbidden Planet, which brought us Robbie the Robot.   In turn, the film was based on a Shakespeare play, leading producer Barbara Stein at one point to describe the play as "Shakespeare meets The Tempest."

The musical has some narration, to set up Act 1 and Act 2, and to conclude the play.  It was written to be done on video, played on the mainscreen viewer of the spaceship that made up the set.  And our director, David Arisco, had a brilliant idea.

He was absolutely right; how could it be anyone else?

So he got hold of Jack Horkheimer, Channel 2' Star Gazer, and I found myself helping to carry a load of video equipment into the Museum of Science.  I wasn't the videographer; I was there more to play production assistant and do whatever needed to be done to make it happen.  Science geek that I am, I wasn't going to miss an afternoon with Jack Horkheimer.

Jack came out of his offices, and we shot in front of an image of the solar system that was on the museum floor.  He was gracious, and tickled that he was going to appear "on the stage."  "I always wanted to act" he said. 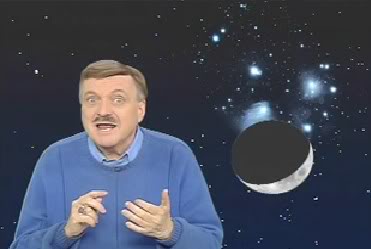 He wore his trademark blue sweater, and worried about his trademark toupee; it became my job to assure him that it was on straight.  It's not that he was terribly vain about it, he just wanted to "look right" for the kids.  His Star Gazer persona was very important to him, making it a real honor that he was willing to lend it to Actors' Playhouse.

It came out beautifully. And the critics agreed.

It is absolutely one of my favorite moments in theatre production.  It was a "celebrity casting" that worked seamlessly, marrying the production solidly with the community.