Palm Beach DramaWorks is planning on opening their new home in November 2011.  And that date is serendipity itself; because it will mark exactly 30 years since the former Florida Theater was first renovated into a live performance venue. 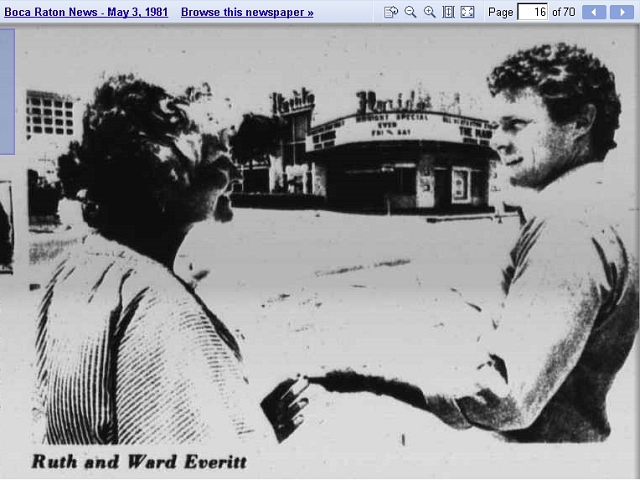 The theater at 201 Clematis Street was originally built by the Florida State Theater chain as a movie house, and it opened on December 17, 1949, with The Heiress, starring Olivia deHaviland.

The conversion of the space was minimal by today's standards; the original 1949 air conditioning system was left in place, and while a stage was erected  over a chunk of the theater's 871 seats (bringing the total to 350),  no actual proscenium built; instead, a divide was built of fabric-covered flats.  It hid actors and scenery from view, but the front row knew it if an actor tripped in the wings.

Rigging was a kind word for the pipes hung a few inches below the ceiling from chains punched through to wrap around the steel truss above.  As a "dead-hung" house, no scenery could be flown in or out.  It either traveled side to side like your living room drapes, or rolled on and off on wagons.  Sound and lights were run from the former projection booths.  No intercom was ever installed, so cues were called via the most advanced walkie-talkies the company could afford at Radio Shack.

After what some reports describe as "a bloody coup," The Stage Company shut down and The Florida Repertory Theatre promptly appeared in its place.  The Rep, formed by former Stage Company staffers, may have been doomed by a gesture of goodwill to the defunct company's subscribers; their tickets to the lapsed company were honored at full value, creating a $500,000 deficit that the Rep never was able to get off the books.  It succumbed to its debt following The Pajama Game in January 1991, blaming a drop in donations to their theatre on the fund-raising efforts of the Kravis Center, which was under construction at that time.  It managed one more production, the critically acclaimed Moon for the Misbegotten, before closing its doors.

The building languished for several years, with a brief stint as a concert hall, until the Burt Reynolds Institute for Theatre Training came looking for a new home in 1996.  Once again, inadequate funding doomed the project, but it now had an interior designed for live performance instead a make shift conversion.  Or at least the sight lines were better; patrons complained loudly about the steep rake in the new 377 seat house.

Shortly after that, it became the Cuillo Center for the Arts, a presenting theatre instead of a production house.

DramaWorks intends to renovate the interior once again, reducing the seating down to a more practical 200, and presumably will address some of the issues with access for older patrons.  A dream of a place to present wonderful plays will be renewed for another generation
Posted by C.L.J.