Gwen Hollander is no stranger to the South Florida Theatre Scene; she's appeared on stages all across the region. Last year she won a Carbonell Award for her portrayal of Eponine in the Actors' Playhouse production of Les Miserablés. 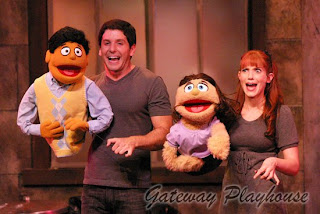 It's interesting to note that she played Belle in two different productions of Beauty and the Beast at Actors' Playhouse.  She's also appeared in the National tours of Titanic, Footloose, Little Women, and 101 Dalmations.

She's currently appearing in Avenue Q at Long Island's Gateway Playhouse, which has received a glowing review in The New York Times:


The whole cast is terrific. If standouts had to be named, they would be Mr. Smith (who played Princeton on Broadway in 2006), Ms. Hollander and Ms. Zimmerman.

Kudos, Gwen; keep up the good work!
Posted by C.L.J.