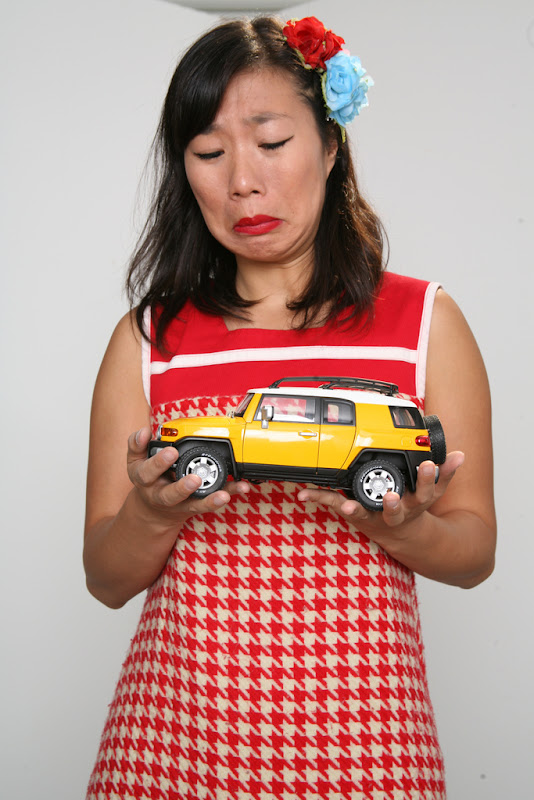 GOING GREEN THE WONG WAY recounts the adventures of Wong’s life-long attempt at sustainable living and the challenges & triumphs of being eco-friendly.


As unafraid of mocking herself as she is of spoofing anything and everything, Wong brings a take-no-prisoners approach to her style of comic theater. Nothing in Wong's world is too edgy, crazy or gross to be used in the service of making theatergoers laugh. And oh do they laugh.

Wong, director Paul Tei and his Mad Cat collaborators have grown what could have been performance art or a stand-up routine into a fully developed theater piece.

Comic eco cohorts -- Troy Davidson as Reuse, Eli Peck as Recycle and Margaret Prusner as Reduce -- give Wong the chance to play off different characters, enhancing the production's theatricality. The show will be going, going, gone before you know it, its three-day, four-performance Arsht run ending late Saturday night. Which is too bad: Wong's sometimes-blue Going Green is a hoot.


Comic Kristina Wong loves dancing near the precipice of what society considers acceptable topics in mixed company, then diving over it. She revels in the profane and the gross, not for shock’s sake, but simply as tools in her kit that she sees no reason not to employ.

Her convention-obliterating comedy is perfectly in tune with the anarchic ethos of the show’s producer, Mad Cat Theatre, and its director, Paul Tei. Not every portion of the 90-minute world premiere at the Arsht Center is hysterical; some sections land a little flat. But large stretches are uproarious.


...directed by Paul Tei, GGTWW is Wong's funny tale of how she tried to do the right thing and Save The Earth.

Wong's enthusiasm sells this show. She's fun to watch and the more outrageous she becomes, as she spills the beans (ouch) about high school, first sex (sort of), door to door canvassing for Eco pledges, recycling, driving a highly inflammable Mercedes powered by used cooking oil, toilet paper and sanitary napkins, the more the laughter.