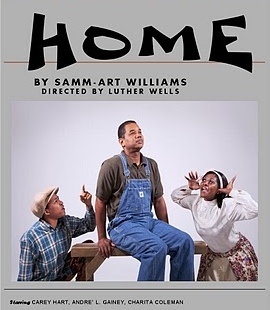 The M Ensemble opened its production of HOME, by Samm-Art Williams, on June 9, 2011.  This marked the 40 year old company's first production in their new home at The Light Box at Goldman Warehouse, in the Wynwood section of Miami.


The odyssey of Cephus Miles, from naive idealistic farmboy to destitute drugged-out subeversive to prodigal son returned to the land is both uniquely specific and undeniably universal.  It doesn't matter what your race is: the struggle to put down roots can lead to the hellish instability of rocky soil long before a redemptive fertile ground is found.


Perhaps with a nod to their new digs, Williams and Richardson have chosen Samm-Art Williams’ Home as their first effort in the simple, sleek surroundings. The play, which earned a 1980 Tony Award nomination when the Negro Ensemble Company took it to Broadway, is a solid choice.

Three able actors play out the story of North Carolina farmer Cephus Miles (André L. Gainey), a man who rediscovers the blessings of home after a life of trials and loss. Director Luther Wells makes good use of the simple “box” space, letting the actors roam a platform stage with little in the way of furniture or decoration. The focus stays on Williams’ words, which range from poetic passages to comic exchanges, pure storytelling and heartfelt interaction (with an undercurrent of desire) between Cephus and the love of his life, Pattie Mae (Charita Coleman, who also plays other small roles).

The M Ensemble presents HOME at The Light Box at Goldman Warehouse through June 28, 2011.
Posted by C.L.J.