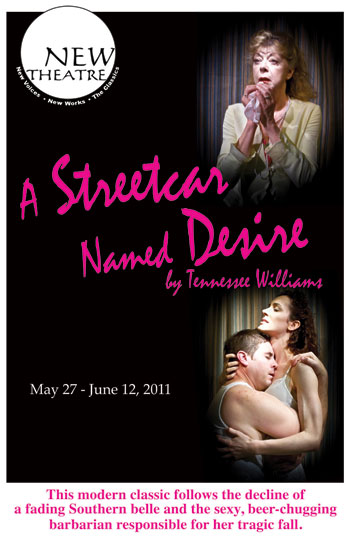 New Theatre opened its production of Tennessee Williams' classic drama A Streetcar Named Desire on May 27, 2011.


This modern classic follows the decline of a fading Southern belle and the sexy, beer-chugging barbarian responsible for her tragic fall.

The reliable, inventive Angie Radosh gets the plum role of faded Southern belle Blanche DuBois...  Radosh conveys the many facets of a desperate woman’s character.

Sporadically, New Theatre’s Streetcar underscores the timeless power of a great play. But that thrill of rediscovering a classic? The excitement of watching a new group of actors bring famous characters to life? That’s not happening in Coral Gables.


Each of the actors has moments worth applauding and each at times seems directionless.  Luckily the good bits outweigh the poor and this Tennessee Williams masterpiece is worth seeing despite the flaws.

Travis Reif's Stanley is a soft man with an occasionally violent temper rather than a cunning brute who abuses because it pleases him.  He truly loves Stella and is all the weaker for it.  As a result, his fury seems forced.  There is little edge

Clint Hooper, a quiet, almost overly controlled actor, makes Mitch a shade, an out of place unlikely pal of Kowalski...

The two women, Elise Girardin as Stella and Angie Radosh as Blanche are much stronger.  Girardin is a natural as Stella... Radosh is ultimately the star of the show as she makes the most of this chance to play the infamous Blanche...

A Streetcar Named Desire plays at New Theatre through June 12, 2011.
Posted by C.L.J.