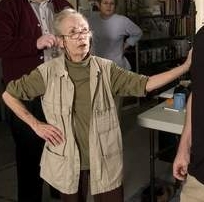 Costume Designer Bridget Bartlett passed away on September 16, 2011.  She was a major force in South Florida theatre, garnering 10 Carbonell nominations for her work at The Caldwell Theatre Company.  She took home four of the awards (The Boyfriend, The Women, The Royal Family, and The Barretts of Wimpole Street).

In addition to the Caldwell, she designed for the Burt Reynolds Jupiter Theatre, the Coconut Grove Playhouse, the Flatrock Playhouse, and most recently served as resident costume designer at the Ocala Civic Theatre, in Ocala, Florida, an organization she has been involved with for years.

Her costumes turned up all over the country and parts of Canada; but she also taught workshops for groups such as the American Association of Community Theatre,  narrated historical fashion shows for fundraiser at OCT, and spoke at the Ocala Rotary Club.

In 1985, she told the Orlando Sentinel how she got started in theater:

''I started sewing when I was 12 or 13. I had polio and rheumatic fever, and my grandfather made me a sewing table. I was a paper doll child. Actors, really, are paper dolls all grown up.''

A set designer friend, Frank Bennett, got Bartlett to help with costuming in little theater in Ocala...

Bennett, of course, was a founding member of The Caldwell Theatre Company, along with Ocala native Michael Hall.

In 1973, Jim Mills wrote his first play, By Damn, one of the first original plays produced by the Ocala Civic Theatre.  He wrote of the experience to the editor of the Ocala Star-Banner, and included a newcomer in his acknowledgments:

"A very special thanks to Bridget Bartlett who outdid herself with the costuming.."

It's a phrase we'd hear in conjunction with her name for years to come.

You can view her obituary here; arrangements are still pending, but you can leave notes on her tribute wall.
Posted by C.L.J.