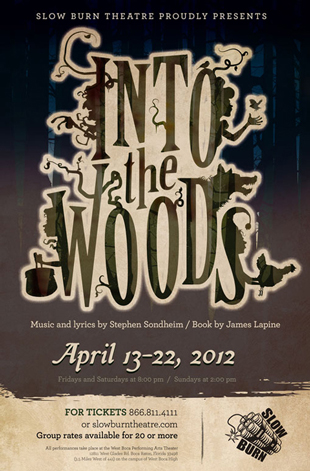 Slow Burn Theatre Company opened its production of Into The Woods at the West Boca Performing Arts Center on April 13, 2012.


Journey into the dark side of Happily Ever After… Slow Burn Theatre invites you to a twisted fairy tale land deep in the world of Sondheim’s popular musical – complete with dead giants, less-than-charming princes and one particularly ambivalent witch. Enjoy the exquisite score as your favorite fairy tale characters learn “Nothing’s all black, but then nothing’s all white” when you venture “Into the Woods.” Music and lyrics by Stephen Sondheim, book by James Lapine.


...we lucky Floridians don’t have to go that far or wait that long to see a first-rate staging of the Stephen Sondheim and James Lapine musical. Slow Burn Theatre has mounted a must-see production of its own in West Boca Raton.

...with the smooth direction of Patrick Fitzwater and the stellar musical direction of Manny Schvartzman, the talented cast emerges from the dry ice haze. The beauty of watching this production is to see each of the main characters soar in their individual moments, then seamlessly come together as an ensemble for the big production numbers.

Matthew Korinko as the Baker and Lisa Kerstin Braun as his wife are a perfect duet. Korinko shows a range of emotion especially on the riveting No More, while Anne Chamberlain’s tender take as Cinderella on No One Is Alone is pure perfection. Mary Gundlach commands the stage as the Witch each time she arrives with a voice that most likely can be heard all the way to Miami-Dade. Rick Peña as Jack, Lindsey Forgey as Little Red and Conor Walton as the foppish narrator (an unusual, but very fun way to play this character) steal scenes with some of the best comic moments. The duet of dueling princes, Noah Levine and Andy Fiacco, in Agony is precise and played to the hilt.

Into the Woods is a complicated challenge that many theater groups have tried and failed to execute, but Slow Burn Theatre proves that even small companies can have big dreams and make them come true.


Slow Burn Theatre Company’s current production of Into The Woods is a solidly delightful and enthralling evening that should not be missed by lovers of musical theater in the region – and that includes people in Miami-Dade loathe to travel to the wilds of western Boca Raton.

Starting with the unobtrusive but rock solid leadership of director/choreographer Patrick Fitzwater and musical director Manny Schvartzman, this production again features a large non-Equity cast who would be steadily employed by the region’s musical theater production houses if there was any justice, plus a team of skilled designers who have created a fully-realized fantasy world with a tenth of the resources of many other companies...

Slow Burn’s virtues are so many that it will be impossible to give everyone their due. But let’s start with how well the cast conquers Sondheim’s sadistically intricate words and music, especially a cast with day jobs and limited rehearsal time. It’s a major accomplishment that not only have most of them mastered the tongue-twisting words and rollercoaster melodies, but that the ensemble en masse maintain the diction required to land the torrent of words in the title number.

One sterling example is Anne Chamberlain as Cinderella rationalizing that making no decision is the safest decision in “On the Steps of the Palace.”

Chamberlain finds every nuance in the classic Sondheimian ambivalence...

Others wring out every emotion from their guts such as Matthew Korinko’s distraught baker in “No More” or Mary Gundlach in just about anything she sings as the witch, but notably “Last Midnight,” “Lament” and “Children Will Listen.”

Still others, with fine voices, bring a comic sensibility to their roles along with strong voices, notably Lindsey Forgey as the daffy determined Red Riding Hood discovering sex, and Noah Levine as Rapunzel’s fatuous prince and Andy Fiacco as Cinderella’s even more fatuous prince...

Believe this: Slow Burn’s productions are not Carbonell eligible only because co-founders Fitzwater and Korinko are prudently not ready to add the expense of the third weekend required by the Carbonell rules. The rest of the musical houses in the region should be grateful. These folks would give them one hell of a run for their money.


With a cast of 19 and some two dozen intricate musical numbers, this is easily the largest undertaking for the three-year-old company, which manages to negotiate the show’s substantial demands with seeming ease.

Heading the cast as the Baker, who must learn a few things about marital teamwork in his quest for four objects that will erase the curse of childlessness, is co-artistic director Matthew Korinko. A reliable utility player in the past, he steps into this pivotal leading role with assurance and an authoritative 11 o’clock number, No More. He is well paired with Lisa Kerstin Braun as his spunky wife...

Other standouts in the cast include Slow Burn veterans Anne Chamberlain as a sweet-voiced Cinderella (who sings the show’s concluding message song, No One Is Alone, an anthem of community) and Lindsey Forgey as a no-nonsense -- yet drily comic -- Red Riding Hood, a match for any hungry wolf.

Director Patrick Fitzwater employs the physical surroundings expertly, deploying his actors without incurring traffic jams... and Manny Schvartzman leads a capable five-member musical combo that accompanies this heady sylvan romp, which comes recommended for Sondheads and for the Into the Woods uninitiated.

Slow Burn Theatre Company presents Into the Woods at the West Boca Performing Arts Center through April 22, 2012.
Posted by C.L.J.